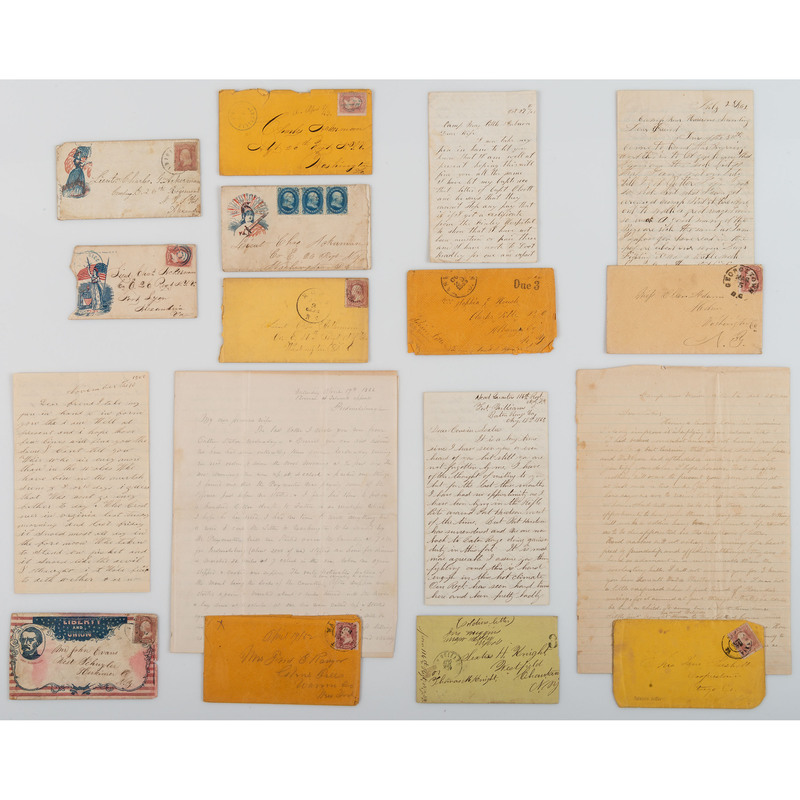 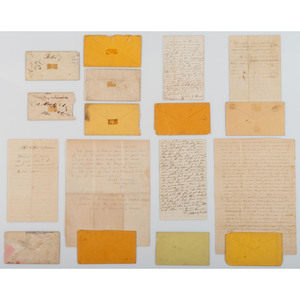 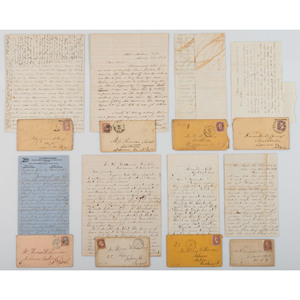 Lot of 21 letters, 20 from New York regiments, one from New Jersey. Most with covers.

JONES, Russell M. A native of Lebanon, NY, he graduated from Union College in 1860. He worked primarily in merchandizing, becoming vice president of the Farmers' and Merchants' Bank kof Benton Harbor, Michigan. Enlisted in August 1862 in the NY 10th Heavy Artillery and mustered out June 1865 at Petersburg, VA. He enlisted as a private and was promoted to 1st Lieutenant by the time he left service. He married Jeannie M. George of Ft. Wayne, IN the same month he mustered out of service. Four letters, one to his future wife.

The first letter with dateline "Fort Mahan, DC, Dec 12, 1863." 4 pages plus crisscrosses filing all margins. To Jeannie. "I think we had better plan a meeting... I propose the street in front of Mrs. Marsell's house or Dr. Ellis' drug store. How would you be pleased with that and let our meeting be in the true german romance style.... You can tell absolutely nothing by what you hear at home about an officer...There is hardly a private in the army but thinks he has the meanest officers in the world over him." At one point he calls her a "tender hearted little hoosier."

A letter to his Aunt (Priscilla Smith on envelope) is dated March 14, 1864, 4pp. He asks her to please track down some money ($200) he sent home for the purchase of some bonds, which were never received. Now he would rather have the cash.

White House (VA?), June 13, n.y. 1p. To his father asking if he got the things he had sent home. Soldiers often sent seasonal clothing home so they did not have to carry it on a march. The regiment had marched to White House. "A harder march I never experienced. I could not have gone 1/2 mile further to save me."

WILLIAMSON, William. Enlisted at Lebanon, NY, his home town, in the 114th NY Infy. He was wounded in action in October 1864 at cedar Creek, VA, requiring amputation of his right leg, and discharged for disability in May 1865 at Frederick City, MD. Three letters.

The first letter was written "On Board the Ship Atlantic / Near Ship Island, Dec. 14, 1862(?)." Addressed to "Dear Friends," he graphically describes his ten days on shipboard and how seasick he was. "[I]t is so awful hot here that I can hardly live...you dont know any thing about hot weather up north if you want to see hot weather just come down here and we can show it to you...." He also mentions that he has not seen a paper in many days (weeks?) and does not know what is going on in the world, and requests that they write to him the news as they get it.

The 114th was involved in the siege of Port Hudson. They were then stationed at Brashear City. His next letter is from there, dated Sept. 17th, 1863. He describes the buildup of 30,000 troops for a large assault. "We have been of[f] on one expedition to Texas....and we had a hard time of it. I assure you we had nothing to eat but hard tack and raw meat and coffee without s[h]ugar hard living...." The battle in which they were involved resulted in a loss and a loss of 2 of their best gunboats.

His third letter is on U.S. Christian Commission paper and largely concerns religion. He mentions a number of men who have been Baptized since enlisting. "Oh how much sickness and suffering I see every day caused by this cruel war and some are carried out almost every day and laid in their graves...." This letter is addressed to "Ann" and he refers to the suffering of "William" in the third person, whether himself or a relative or neighbor is not clear.

Five letters to Lieut. Charles Ackerman, 26th NY Regt. from a number of friends and fellow soldiers. Ackerman was born in Germany and immigrated to New York at the age of 16. He served initially in the 26th NY Vols. He veteranized, then enlisted in the regular army, serving until June 1866. One letter is from a man in his regiment, written from the hospital in Washington, DC. "Sir, it is with the greatest pleasure I am going to write you a few lines to let you know how I am getting along since I left you. After I left Antietam I came here where I still remain." He then delineates the pay he received and how much of his clothing bill he settled. "As for my leg it is not well and I don't think I will be able for duty for some time. When you get this please write and let me know how many of the loss is in the company."

FRENCH, Charles. 44th NY Infy. Wounded at Malvern Hill, he died of his wounds July 13, 1863 at Frederick, MD. This letter is dated July 28, 1862, the envelope addressed to Miss Ellen Adams. "A good many of the Boys are sick the same as I am. I suppose you have read in the papers about our seven Days Fighting, it was terrible... fighting all day and retreating at night and the Rebels following us up all the time..." He writes of Generals Morell, McClellan, Morgan, plus camp news and more.

HOUCK, John. 44th NY Vols. 4pp letter, "Camp near little Auburn, Oct. 27, 1863." Part of the letter concerns trying to get a discharge. Early in the war, Houck chopped off part of his big toe while chopping firewood, setting up an infectious situation that lasted through the war. "I cannot march, it almost kills me and the Doctors will not do any thin for me here...We camped the other night on the old Bull run battle ground and it was the awfullest sight that I have ever seen. Human bones lay scattered over the whole field, some without heads, some without legs and arms and some that was never buried at all. Old muskets and pieces of muskets, bullets, bomb shells and cannon balls lay in all directions."

STICKLES, Elmur. 15th NJ Infy. He enlisted in August 1862, and deserted the following July. This letter is dated Nov. 10, 1862. A bit difficult to read, as his spelling leaves something to be desired, but he tells his friend about marching 8 to 10 days then crossing into Virginia. He about froze to death standing picket duty in the snow. But when McClellan and Gen. Brooks rode by inspecting the troops, they were greeted with a round of cheers. In a wonderful patriotic cover with "Liberty and Union" at top, McClellan's portrait upper left.

RANGER, Frederick E. Capt. Co. F, NY 22nd Infy. He enlisted in his home town of Glens Falls, NY as soon as the war broke out, in May 1861. In January he was commissioned 2nd Lieut., eventually promoted to Captain. He mustered out in June 1863. This letter to his wife id dated 19 April 1862, "Bivouac at Falmouth opposite Fredericksburg." He describes the march to Falmouth - walk 8 miles, rest an hour, walk 5 miles, rest an hour, sleep at 11 pm, awakened at 1 am to march some more. As they neared the town, signs of rebel activity became apparent. His unit was marching behind a cavalry unit, another infantry unit and a second cavalry unit. They began to encounter dead horses and cavalrymen as they approached Falmouth. The rebels were crossing bridges to the Fredericksburg side and setting fire to them. Three full pages of battle content, relatively easy to read.

BARNUM, Covert. Marion Mills, 26 Feb. 1865. 2pp (7.5 x 12 in.) To his sister in Cooperstown, NY. He thought the rebel troops had concentrated at Vicksburg, but did not think they would attack soon. Most of the rest is personal, asking people to write, etc.

PRESCOTT, Albert D. Head Quarters, 116th NY Vols., Fort Williams, Baton Rouge, La., Aug. 18, 1863. 4pp. To Cousin Sextus Knight. Albert describes the movements of the unit for May until this letter. "We left Baton Rouge on the 20th of May for Port Hudson. Had a fight on the 21st at Plain Stores, drove the Rebels three times on Bayonet charges. On the 27th of May we had another fight at Port Hudson and had to carry the works by storm but were repulsed with terrible slaughter. The enemy poured Grape and Canister into us like rain and we were charging through a slashing about 1/2 a mile across. Our regt. alone lost 102 on that day. on the 14th of June we made another attack on the place and were again repulsed with considerable loss. Genl. Banks then called for a Forlorn Hope of 1000 men from his Dept. and wanted to make one more assault. I volunteered to go from my Co. and was accepted. We were organized and supplied with every thing that was needed for a successful charge and were all ready when the Rebel Genl. (Gardner) sent out a flag of truce and surrendered." He goes on to describe his close brushes with bullets, but notes he has been lucky and not suffered a scratch. Wonderful letter with battle description. Prescott enlisted in September 1862 in Co. K of the 116th NY Vols. as a private and was promoted to sergeant by the time he mustered out in June 1865.

ELLINWOOD, Lyman W. KIA. Enlisted in the 14th NY Regt. in Dec. 1863 and was killed at Fort Stedman, VA just weeks before the end of the war in the East, 31 March 1865. Three letters to friends Bedy and John. The letters were sent from the post hospital at Fort Richmond. Two of the three were written Apr. 24, 1864, the other on Dec. 19, 1864. He notes that there has been a lot of sickness. "All of the 14th regt. left the harbor Apr. 22 & 23....There is about 40 men left here of the 14th regt that was not able to go & I was one of the nurses left to take care of them." He tells John that the 3rd Regt. came to the Fort on the 22nd. "They are pretty well cut up. Their flags are pretty well riddled. Only 130 men & parts of 6 companies." The later letter describes how their Sundays were spent in the Hospital. "The Chaplin brings in papers & books to read & ladies from the city and village down north from here bring in a good many things to the hospital so we have plenty of reading....Adolphus Andrew & I feasted on those things that was sent to us for a while I have got a little butter left and the rest is all gone."