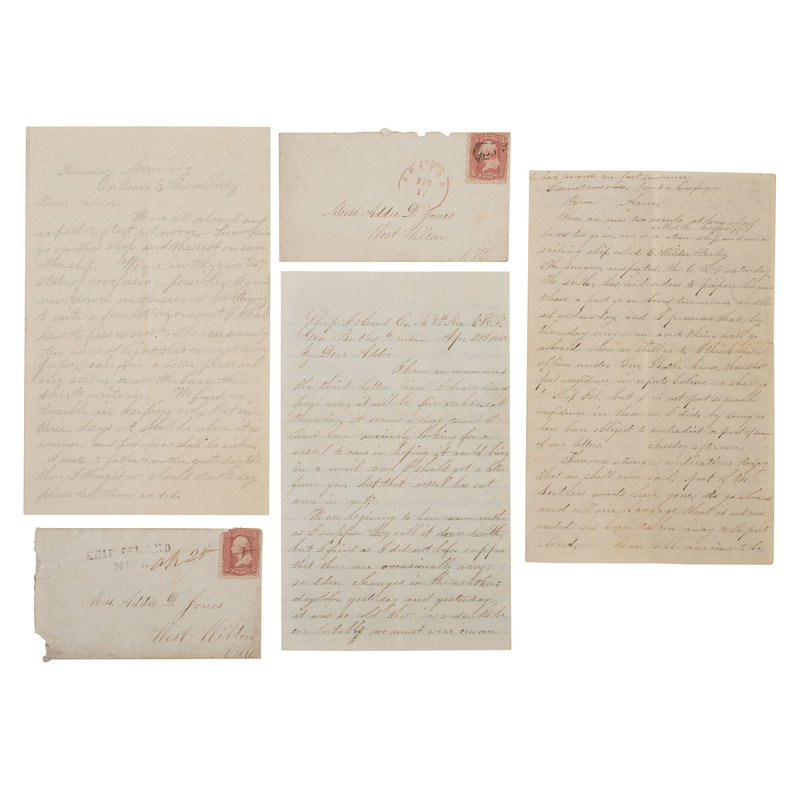 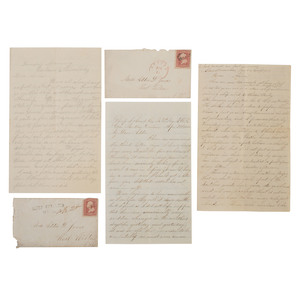 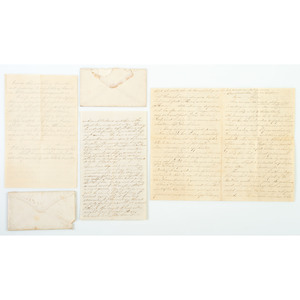 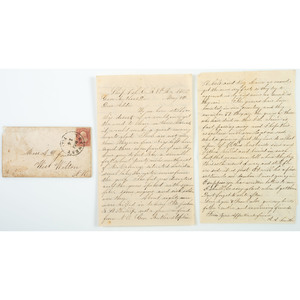 Lot of 11 exceptionally descriptive letters written by Private Aaron A.Smith of Wilton, New Hampshire. Smith enlisted on 10/28/1861 and later mustered into "B" Co. New Hampshire 8th Infantry. He spent the entirety of his service in the Department of the Gulf as part of the "Butler Expedition," but his enlistment would be short. Letters in this archive span January 22, 1862, through December 10, 1862, just eleven days before his death. Content includes Smith's transport to Ship Island, MS, from Boston Harbor, the conditions at Ship Island, descriptions of the city of New Orleans, and the Battle of Georgia Landing (Labadieville).

All correspondence is addressed to Smith's sweetheart Miss Addie D. Jones of West Wilton, NH. In his letters Smith proves himself to be a keen observer and illustrative writer. Writing on February 16, 1862, aboard ship in Boston Harbor, he tells Addie, "We are in the greatest state of confusion possible. I am now down on the second deck trying to write a few letters, or what I shall have to pass as such. There are scarcely five rays of light that can get to my paper. Can find a better place in our cellar or in the barn that to write this in...." By April 22nd Smith has arrived at Ship Island and his letters there paint a vivid picture of the pestilent sand, the soldiers in camp, and the various inhabitants, such as one woman who "said she wished she could put out the eye of the Northerners with those guns and bayonets. She thought the Northerners were not any better than the Niggers...." Another letter describes the escaped slaves who fled to the Union lines: "The Darkies frequently come over here and they are quite tickled to get here. I have heard one say that their masters represent us to be very cruel and tell them we will cut off an arm, starve and whip them if we get them. They try to make them think they believe all they say and tell them they will fight for them and not go to the Yankees, and at the same time are making plans to escape. This one said if they should get him they would hang him for the Negroes were planning an insurrection and he was at the head...."

While Smith's letters are generally detailed, his 8pp letter of May 24, 1862, written from Camp Parapet near New Orleans, stands out for its evocative description of the Union military advance upon New Orleans and the efforts of locals to destroy military and foodstuffs that would be of value to Yankee invaders. Smith writes in small part: "When they heard we had taken Fort Jackson and only a few gunboats had got up to N. Orleans the soldiers in this place ran in every direction, some even over the parapet into the ditch of water. Some took off their equipments and burned them then put on citizens clothes to prevent them being caught with soldiers uniforms on...The carriages of the guns were burned by the women. The guns spiked, the equipments and everything that the soldiers left that would fall into our hands were burned, and all done by the women...."

Smith remained at Camp Parapet through September before joining General Weitzel's brigade and participating in the Battle at Georgia Landing, an engagement he describes briefly in his final letter of December 10, 1862. He soon fell seriously ill and succumbed to disease on 12/21/1862 at Thibodeaux, LA.