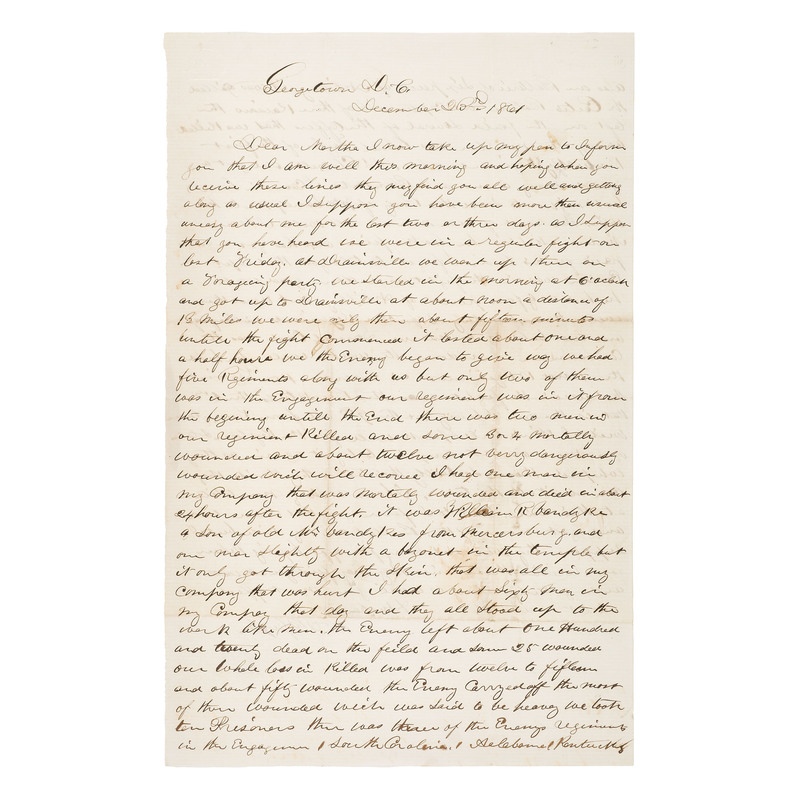 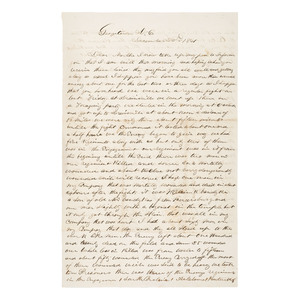 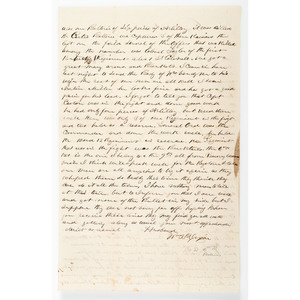 A resident of Franklin County, PA, William Dixon enlisted in April of 1861 as a captain and was commissioned into Co. D, 35th Pennsylvania Infantry on April 24th. The regiment, also referred to as the 6th Pennsylvania Reserves, moved to Washington, DC that summer and was attached to the 3rd Brigade, McCall’s Pennsylvania Reserves Division of the Army of the Potomac. Duty at Tennallytown and a brief expedition to Grinnell's Farm were the only preparations for the Battle of Dranesville, the first action seen by Dixon and his compatriots. On the morning of December 20, the forces of Confederate General J.E.B. Stuart met those under Brigadier-General Edward O.C. Ord, tasked with clearing Rebel scouts and pickets from the Alexandria and Leesburg Turnpike. The encounter was relatively small and short-lived, but, importantly, marks the first time when Union forces bested the enemy and drove them from the field in the Eastern Theatre.

Dunlap describes the Battle of Dranesville to Martha three days later, noting that his regiment "was in it from the beginning until the end. . . we were only there about fifteen minutes until the fight commenced. It lasted about one and a half hours." Of the estimated 71 Union casualties during that brief window of time, Dunlap relates that "there were two men in our Regiment killed, and some 3 or 4 mortally wounded and about twelve not very dangerously wounded which will recover." Within his company, two were wounded, including "one man. . .with a bayonet in the temple but it only got through the skin." As for the Confederate losses, Dunlap estimates that "the Enemy left about one hundred and twenty dead on the field and saw 25 wounded. . . the enemy carried off the most of their wounded which was said to be heavy." In addition, they captured ten prisoners and three Caissons, prompting Dunlap to boast that "our men are all anxious to try it again, as they whipped [the Confederates[ so badly this time." Generously, he credits their success to Ord's skillful leadership and the bravery of his fellow soldiers in battle: "General Ord was the commander and done the work well. He held the 10 and 12 Regiments in reserve. The Regiment that was in the fight was the Bucktails, the 6th that is the one I belong to & the 9th all from Pennsylvania, which I think will speak well for the Keystone State."

Creasing as expected, with a few minor areas of staining and smudging. Written on paper marked for Owen & Hurlbut of South Lee, Massachusetts at upper left.