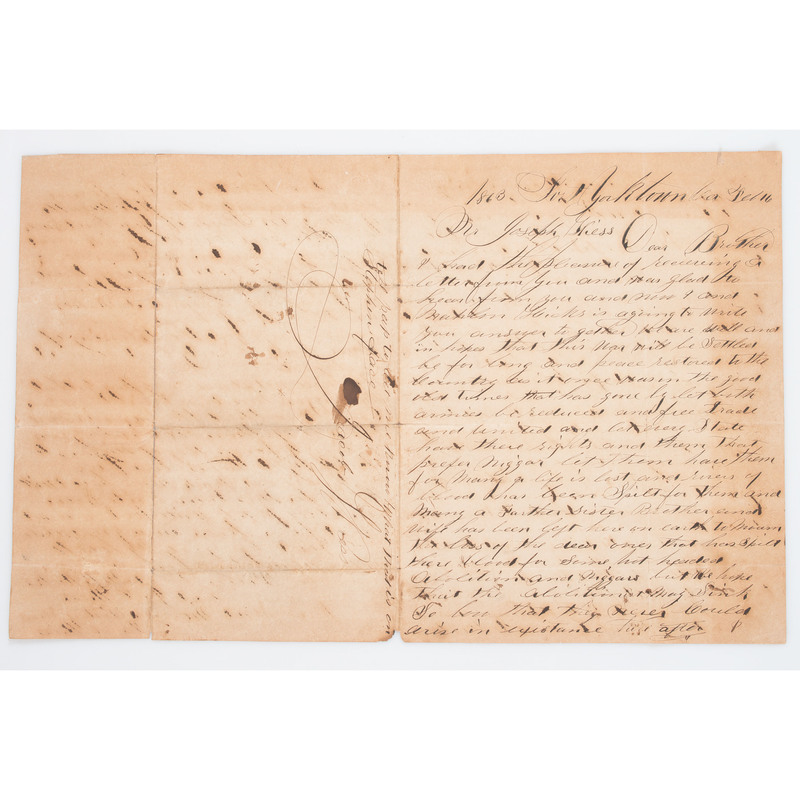 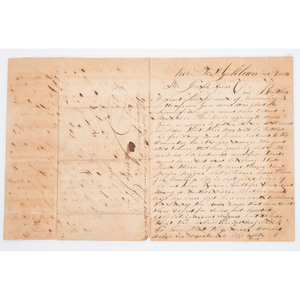 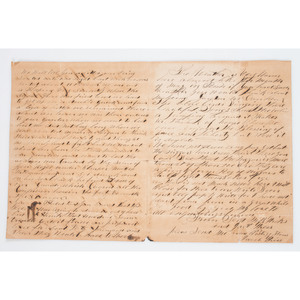 Civil War soldier's letter, 3pp, 7.75 x 9.75 in., "Fort Yorktown, Va." February 16, 1863. Letter appears to be written by Jacob Wiess, though he mentions that Sergeant Mahlon B. Hicks and he wrote the letter together, and uses the pronoun "we" quite often (i.e. "we are well and in hopes that this war will be settled be for long and peace restored to the Country as it once was in the good old times that has gone by."

Letter contains some interesting camp life content, including the following report: "The alarm was caused by the some of Gen Keyes under Straper went up Williamsburg and got drunk and on his road back he fired at one of our guards which caused all the confusion herein the fort [indecipherable] the alarm."

Wiess also offers his (and perhaps Hicks') opinion on the war and abolitionism multiple times, asserting his disdain for slaves and freedmen by using harsh and derogatory language. He writes, "...many a father, sister, brother, and wife has been left here on earth to mourn the loss of the dear ones that has spilt there [sic] blood for some hot headed abolition and n****** but we hope that the abolitionist may sink so low that they never could arise in existance [sic] here after."

The letter ends soon after Wiess comments on his lack of pay for his service. He writes, "We have not drew [sic] any pay yet but the n****** has drew theirs there you can see that the n****** is more thought of than we are." He then mentions that there is going to be a regiment made up of free slaves so that they can "help fight themselves free."

Jacob Wiess (historical data systems lists his last name as Weiss) mustered into Company H of the 178th Pennsylvania Infantry Regiment on October 28, 1862. He mustered out of that regiment shortly after being promoted to Sergeant, in July of the following year. The regiment was posted at Yorktown during the winter of 1862-1863, and went on to relieve troops at Fort Magruder in April and skirmish with the enemy on their way to Richmond in July.

Mahlon B. Hicks also mustered into Company H of the 178th Pennsylvania Infantry Regiment on October 28, 1862, and was promoted twice (to 1st Sergeant in January of 1863 and 2nd Lieutenant in June) before mustering out in July of 1863.

Letter with toning, discoloration, some separation at creases, and wear to edges and corners (including bits of paper loss).