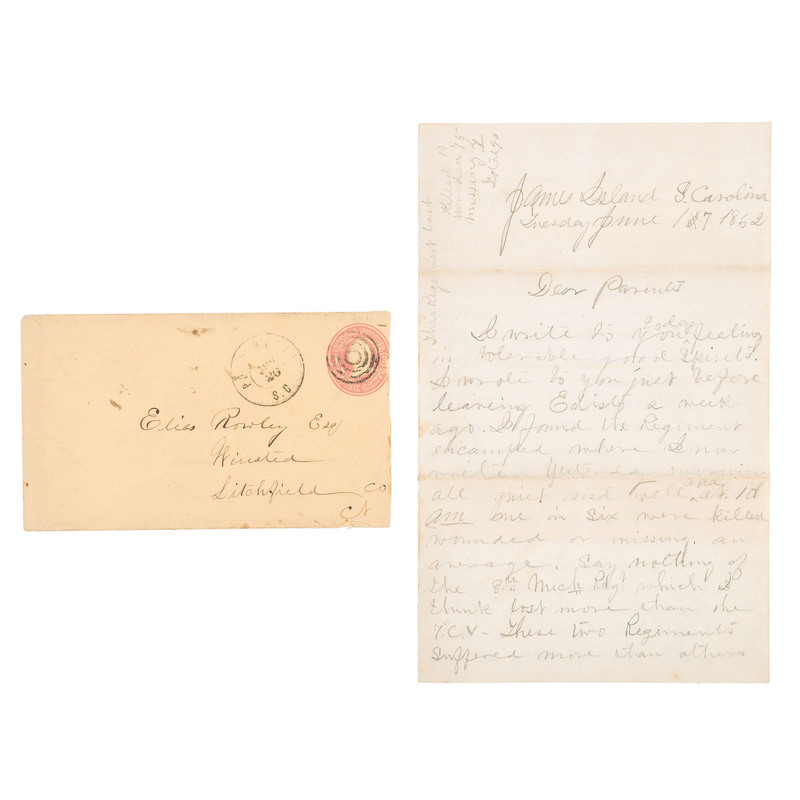 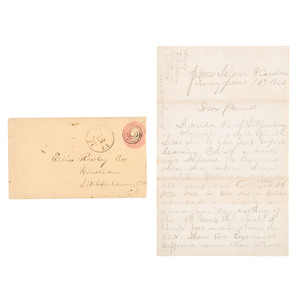 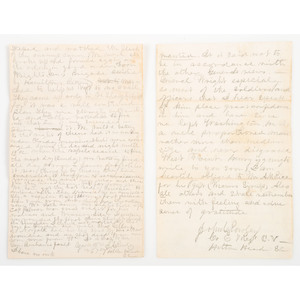 The 7th Connecticut Infantry was organized at New Haven in mid-September of 1861. Rowley joined at its inception and was mustered into Co. E. With his regiment, he was attached to Sherman's Expeditionary Corps in Maryland and traveled throughout coastal South Carolina on expeditions to Port Royal, Braddock's Point, and Hilton Head. The capture of Fort Pulaski occurred in the spring of 1862 and, following this triumph, the 7th Connecticut was assigned to operations on James Island with the District of Hilton Head, Department of the South beginning on June 1, 1862.

Rowley writes to his parents on the day following a failed Federal attempt to claim Charleston, SC for the Union during the ill-fated Battle of Secessionville. He notes that the battle began abruptly, relating that "yesterday morning all was quiet and well and at 10 am one in six were killed, wounded or missing on average." Along with the 8th Michigan Infantry, the 7th Connecticut "suffered more than others being in advance of the Brigade" and records his final tally of loss in the upper left margin, approximating that ninety men were either killed, wounded, or missing.

Describing the events that gave rise to the battle, Rowley tells his parents of a reconnaissance expedition, wherein several officers "were allowed to go very near [the rebel battery] without being fired upon by the pickets. . . the rebels were almost harmless and that to take their battery would require but little exertion." Confident in their assured success, Rowley and his comrades were faced with an entirely different set of circumstances by the next day: "Monday morning at 1 o'clock Fenton's & Stevens Brigades were ordered to march. . . at daylight we drove in the rebel pickets about 3/4 of a mile from the battery. They killed and wounded three of four of our men. We marched on through a cornfield (all silked out) and into an open field. . . their rifle pits were filled with rebels that fired and mowed down our men like sheep. Immediately they shot grape & canister during still greater executing from their battery. . . the shells bursting all about us at the same time. It was a time of peril."

Amid the chaos, Rowley's regiment was able to reassemble, and they were soon assisted by General Ambrose R. Wright's "Georgia Brigade," as well as "Hamilton's Battery [who] marched to help us but to no avail. They came up only to be slaughtered for it was a well contrived plan." In his analysis of their tactics, Rowley notes that the Confederates "were strongly entrenched and had other batteries to fire into that one if we succeeded in taking it." After a prolonged period of firing back and forth, abruptly "the rebels ceased to fire. . . it was thought by many they had evacuated it therefore a reconnaissance was made. They went very near and thought they were tame but far from it. We have go the hot head of succession to contend with. They drawed [sic] us in completely a regular trap."

Reflecting on the staggering "loss of life" experienced by Union forces in battle, Rowley shares that it "surprises me to think our General in Command Benham did not ascertain [the Confederates'] strength first and if finding a weak spot did not use some stratagem. . . it is said not to be in accordance with the other Generals' views." Rowley emphasizes again before he closes that the loss "is thought to be Gen. Benham's fault."

General Henry Benham's (1813-1884) superior officers seemed to agree, and Benham was arrested for his botched charge three days after the battle. His commission was revoked, but given the dearth of decisive Union leadership at that time, he was given command of the Army of the Potomac's engineering brigade six months later and joined General Ulysses S. Grant for the Vicksburg Campaign. Meanwhile, Rowley's regiment evacuated James Island in the aftermath of the Battle of Secessionville and relocated to Hilton Head, where it was reassigned to the District of Beaufort, SC. In this capacity, Rowley participated in the assault on Fort Wagner and the Battles of Drewry's Bluff and Bermuda Hundred before mustering out on September 12, 1864.

Creasing as expected, with some small holes at center fold lines. Areas of brown staining/spotting to edges and at creases.