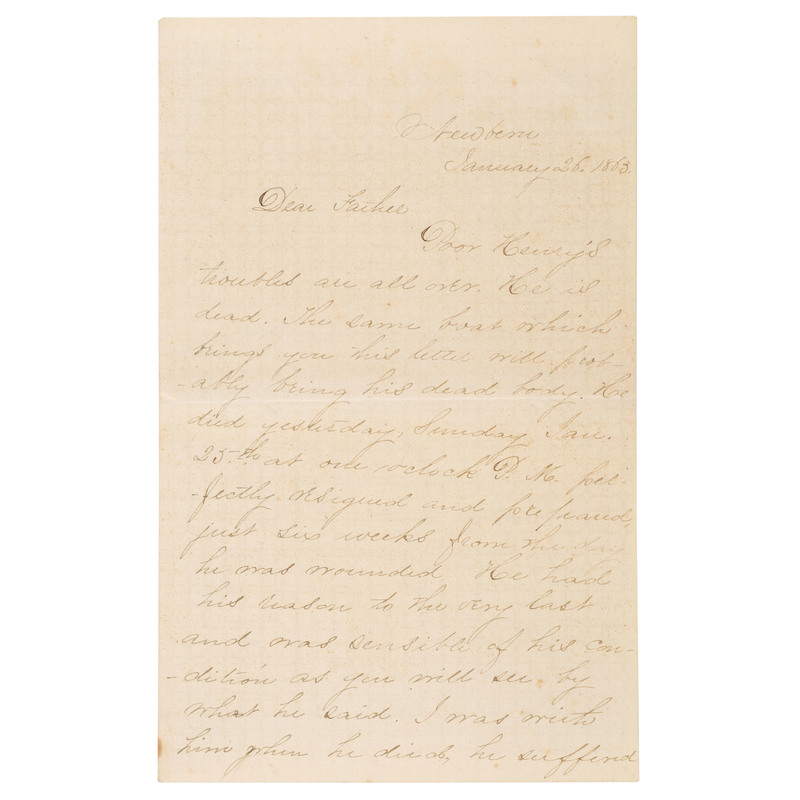 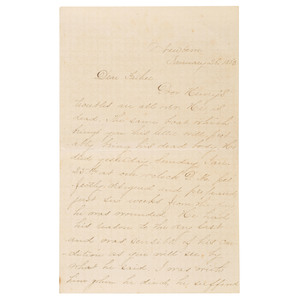 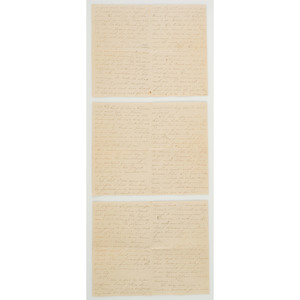 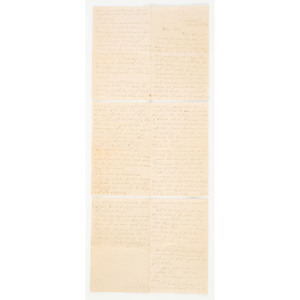 Civil War Letter Concerning the Death of Henry W. Clarke, Co. B. 10th Connecticut, Written by His Brother, Plus

Henry Clarke, a resident of Coventry, CT, enlisted on September 5, 1861 as a private and mustered into Co. B, 10th Connecticut Infantry. John, his younger brother, followed him into the service and mustered into the same regiment the following July. Together, the brothers were stationed at New Bern, NC for the majority of 1862, assigned to the 2nd Brigade, 1st Division, Department of North Carolina. They participated in Foster's Expedition to Goldsboro in December before the Battle of Kinston in December 1862, when Henry sustained mortal wounds. Hospitalized for several weeks, Henry finally succumbed to his injuries on January 25, 1863. In the letter, John shares this sobering news with their father and meticulously records his final conversation with Henry.

He writes in part: "Poor Henry’s troubles are all over. He is dead. The same boat which brings you this letter will probably bring his dead body. He died yesterday, Sunday Jan. 25th at one o’clock P.M. perfectly resigned and prepared, just six weeks from the day he was wounded. . . He has fought his last battle and won a glorious victory, not over worldly foes only, but over sin and death. Like thousands of others, he fell while nobly defending his Country’s rights." Additionally, he describes the nature of his brother's wound, a gunshot to the chest: "The ball was taken out this morning. It broke the 2d rib where it joins the breastbone, turned and went down through the left lung and was found under the 5th rib near the heart. The lung was entirely destroyed, turned to matter."

John devotes the rest of his letter to recording his poignant exchanges with Henry during his final few days. Regarding his injuries, Henry declares, “Oh, John, after all this that poor ball has done, I’m afraid I’m nearer death than I or any of you think. I am growing weaker. I’m going, John. Pray for me, won’t you clear down from the depths of your heart. Pray that I may be welcome at the throne of God. It will be pleasant to be there with those that have gone before, won’t it? I believe we shall meet each other in Heaven, John. . . You know best what to tell Father and the rest. Give your wife one of my pictures and tell her to keep on praying and I hope if her husband is ever wounded or sick he may receive as good care as he has taken of me.” A deeply spiritual man, Henry candidly shares his ruminations on death and the afterlife and frequently expresses his gratitude for John's attentiveness during his time of suffering. John writes to his father that Henry "was in much pain. I gave him 30 drops of Laudanum which quieted him and when the Dr. came he ordered 15 more every two hours."

Near the end of his life, Henry said, “I am a poor boy, a poor sufferer. I don’t believe there are many who have suffered any more for their country than I have. I have friends haven’t I? The circle is large enough to mourn my loss. Don’t cry, it will soon be over with me. Oh, Heaven, sweet Heaven, when shall I get there. I begin to sigh for it more than for home.” After Henry's passing, John tells his father that his brother's "body will fill a Christian patriot’s grave, while his spirit has returned to its Maker. He is happy now in the Spirit land. I deeply regret and mourn his death, but our loss is his gain. It is well with him now. He has fought a good fight, he has finished his cause, but I am lonely now."

John continued his service without Henry and was moved to Hilton Head in early 1863, attached to the 2nd Brigade, 4th Division, 18th Army Corps, Department of North Carolina. His regiment participated in the Battle of Secessionville and siege operations against Forts Wagner, Gregg, and Sumter, as well as Morris Island and Charleston. In 1864, the 10th Connecticut was involved in the Battles of Deep Bottom, New Market Road, and Fair Oaks, and in the final year of the Civil War, it was engaged in the assault on Petersburg and the Battle of Appomattox Court House. John was discharged on June 5, 1865.

Accompanied by a small piece of netted black fabric, unmentioned in the letter although presumably funerary in nature.

Letter with brittleness and creasing as expected.