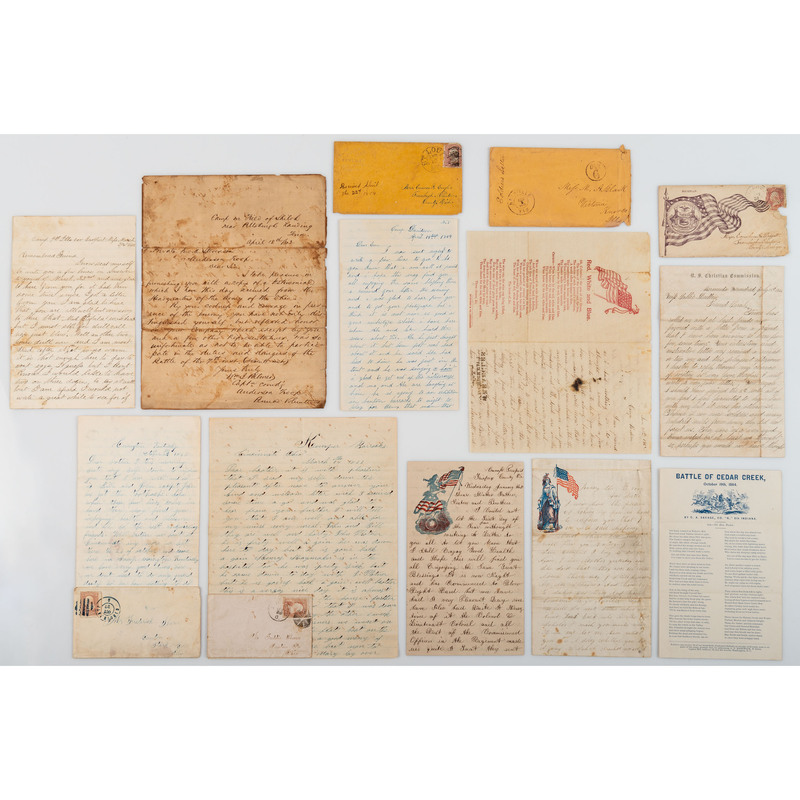 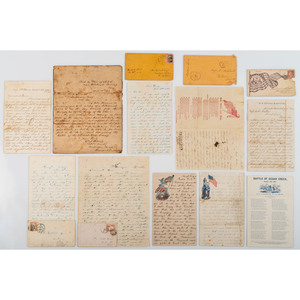 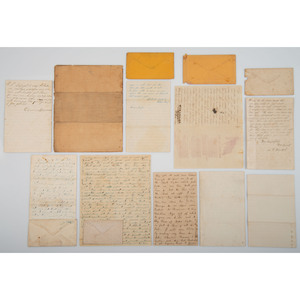 SHEARER, George. Two letters to his brother, Frederick. The second letter has a portion written by John Kitzmiller. Both men of Co. E, 115th Ohio Vols. Shearer enlisted in August 1862 and mustered out in June 1865 at Murfreesboro, TN. The first is datelined Kemper Barracks, Cincinnati, Ohio, March 14, 1863. George tells brother Fred about mutual friends and how they are faring. He mentions that they took prisoners to Louisville, KY a short time ago by steamboat. Then he went to Cairo, IL, "right in the corner of the Ohio River and the Mississippi River....on the road going down we almost had bad luck. The cars run off the track and smashed three cars pretty well. We was in the hindest of the three that run off the track." The corner of the car was smashed, with pieces flying around, but, amazingly, no one was hurt.

The second letter is from Covington, KY, October 27, 1863. "Well brother, we hant at Cincinnati anymore, we left there the 23 of October and came here in Camp Covington Kentucky. We have very good times here. We don't need to do any guard duty so we have nothing to do but to eat and drink and sleep....They say we are to leave tomorrow and go to Louisville, Kentucky...." He asks his brother to get his two likenesses from a female friend. "...I wrote her a letter and have go no answer yet so sit shows well enough that my letter wasn't welcome and if my letter hant welcome why I hant welcome and if I hant welcome my likenesses hant welcome and so I don't want her to have them." The part from Kitzmiller does not contain much news. He admits he was waiting to write when they got to wherever they were going next.

HAYWARD, Arthur W. Bermuda Hundred, July 15, 1864. 4pp. To Sarah Dutton. No battle content, but plenty of patriotic fervor. "My position at present is quite different from what it was a few months ago....There I was permitted to enjoy all they comforts that a peaceful & quiet home could afford. Now I am exposed to all the trials and dangers of camp life and a soldiers hardships. Well, I think the last most honorable & think that all wo can come had ought to come forth & help their Country in this its great & death struggle." Hayward enlisted in the 148th Ohio May 2, 1864 and mustered out Sept. 14, 1864 at the age of 36.

EAEGLE, William. Co. B, 3rd Michigan Cavalry. Two letters. Camp Benton (St. Louis, MO), Jan. 20, 1862. To Emaline Doggett, Greenbush, Clinton County, Michigan. Mostly personal. He does mention that there is snow on the ground and it is quite cold, "but when it is thawed out the mud is nearly as deep as the snow is." He stamped the letter with his name and unit. On patriotic stationery with cover.

Second letter from Camp Davidson, April 14, 1864. Addressed to "Em" but this time is signed "your husband." So at some point in the two years between these letters, they were married. Eaegle re-enlisted in Jan. 1864, so he would have had a month's furlough at that point. The second letter is also mostly personal.

HEDSTROM, Charles. 9th IL Vol. Cav., Eastport, Miss. March 30, 1865. To Miss M[arion]. A. Clark, Victoria Knolls, IL. He says they have turned in all their horses and most of their guns, but are supposed to go to Louisville where they will get more. Most of the rest is personal. Mentions a shortage of postage stamps which the men cannot acquire at any price.

PALMER, William I., Capt. Comdg. Anderson Troop, Penna. Volunteers. Camp at Field of Shiloh near Pittsburg Landing, Tenn. To John A. Stevenson, Anderson Troop. "By your coolness and courage in presence of the enemy, you have not only distinguished yourself, but reflected honor on your Company,  which except by you and a few other representatives, was so unfortunate as not to be able to participate in the duties and dangers of the Battle of the 7th inst." Signed Wm I. Palmer, Capt. comdg.

RYAN, M.H. Unknown unit. Letter dated Jan. 1, n.y. Camp Pierpont, Fairfax Co., VA. On patriotic stationery. New Year's letter mostly relating the holiday celebrations in the  camp. He does mention that a man in their company had died of disease. His father was notified, but arrived too late, the man had died a few hours earlier.

REID, Joseph. Not war related, but dated 1862. To his sister discussing school.