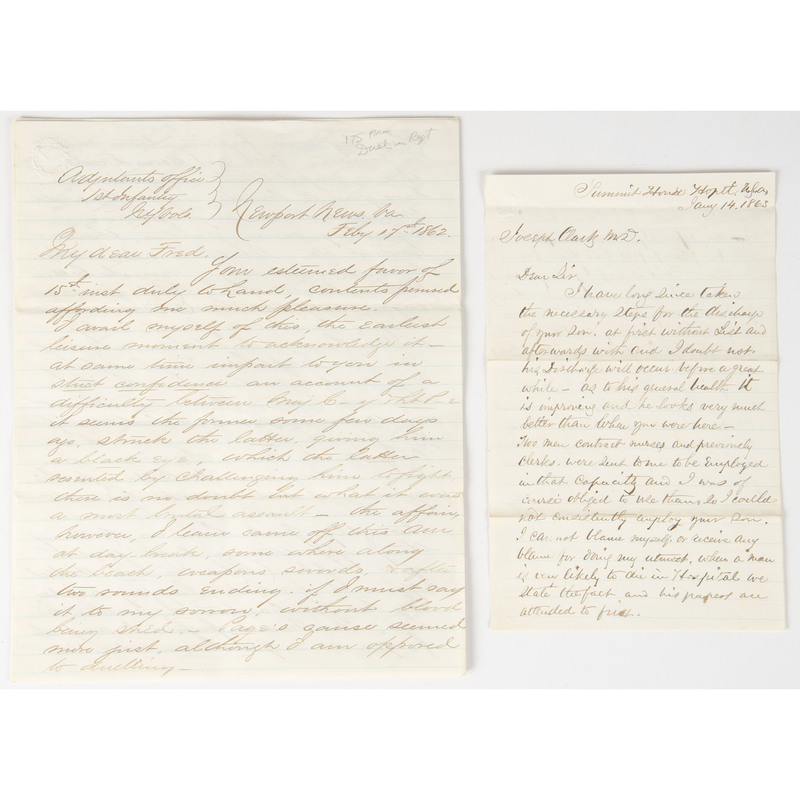 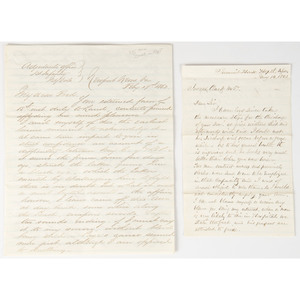 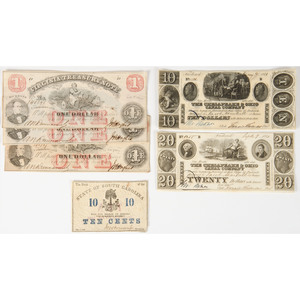 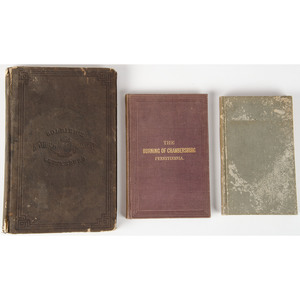 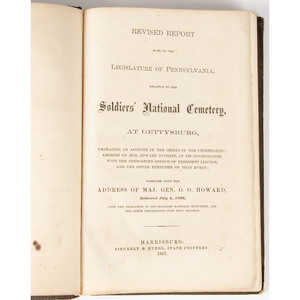 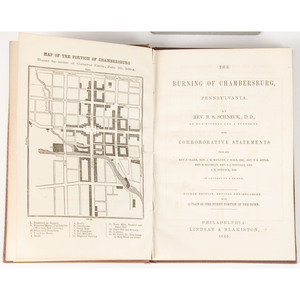 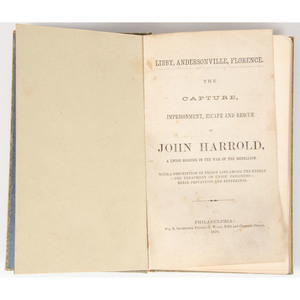 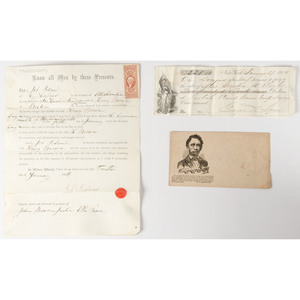 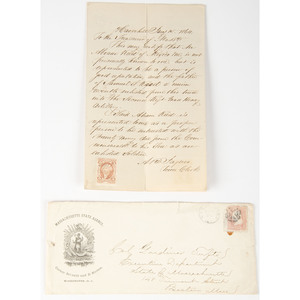 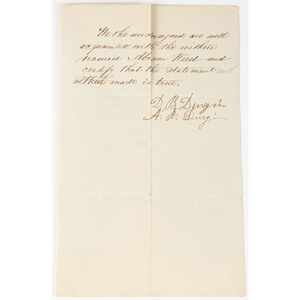 Lot features 3 Civil War related books including 1867 revised report on Soldiers National Cemetery in Gettysburg, The Burning of Chambersburg (1865), and The Capture, Imprisonment and Rescue of John Harrold (1870); Collection of Civil War documents, including a letter from a doctor to another doctor about his son's condition in civil war hospital; Civil War letter, more.

ALS, 6pp, Adjutant's Office / 1st Infantry, NY Vols., Newport News, VA, Feb. 17th, 1862. Wallace, William L. Addressee identified as "Fred." Wallace describes a fight between "Maj. C" & "Lt. P" [he later refers to "Page," likely the "P"] in which the former struck the latter prompting a challenge to fight. They fought on the beach with swords, and it was apparently brutal, but neither died. He remarks: "Page's cause seemed more just, although I am opposed to duelling." He asks the recipient to keep this confidential."

"We recd. last eve'g news of the capture of Fort D____ & 15,000 prisoners. I really wished you here to witness the enthusiasm of men. Every company in our Regt. turned out in their respective streets, whereupon cheer upon cheer would give free vent to their feelings. On the impulse I ordered the Band to play the National airs in front of the Cols. quarters."

He then asks if a good horse can be found and procured for $150. Signed "Billy," as is a postscript.

Illustrated postal cover, unused. Portrait and quote from W.G. Brownlow (1805-1877). Consignor identifies as "Wolcott 123." Brownlow was a minister and newspaper publisher. He later became Governor of Tennessee and a US Senator representing that state. Brownlow was in favor of former slaves voting and worked to that end, some say, prompting the rise of the KKK in Tennessee in opposition to Brownlow's policies.

There is a group of short documents that seem to be of the kind men signed before leaving for battle. One partially printed document, 8 x 10 in., dated 4 Jan. 1864, is for Job Ireland of Egg Harbour indicating that he had received $125 from the state and was not owed any more (bounty?). It also appoints Henry Browne as his attorney.

ALS, 1.5pp, to the Treasurer of MA, re: Abram Reed of Mexico, ME, father of Samuel Reed, a minor recently enlisted in the 2nd Regt. Mass. Heavy Artillery. The town clerk notes that, although not known to him personally, Abram Reed "is presented to me as a proper person to be entrusted with the Bounty money due from the Commonwealth." In a business envelope addressed to Col. Gardiner Tufts, Executive Dept., State of Massachusetts.

Revised Report Made to the Legislature of Pennsylvania, Relative to the Soldiers' national Cemetery, at Gettysburg,... Together with the Address of Maj. Gen. O.O. Howard, Delivered July 4, 1866,... Harrisburg: Singerly & Myers, 1867. 8vo (10" tall), embossed brown cloth, 282pp. Frontis of the monument and folding map of the National Cemetery. Wear to boards, front hinge weak, but holding; spine ends with damage.

Harrold, John. Libby, Andersonville, Florence. The Capture, Imprisonment, Escape and Rescue of John Harrold, a Union Soldier in the War of the Rebellion. With a Description of Prison Life among the Rebels - The Treatment of Union Prisoners - Their Privations and Sufferings. Philadelphia: Wm. B. Selheimer, 1870. 12mo (7.5" tall), grey cloth boards, 132pp. Small area of water damage at top near spine to approx. back half of the textblock, spotting (mildew??) damage to boards; hinges and textblock tight.