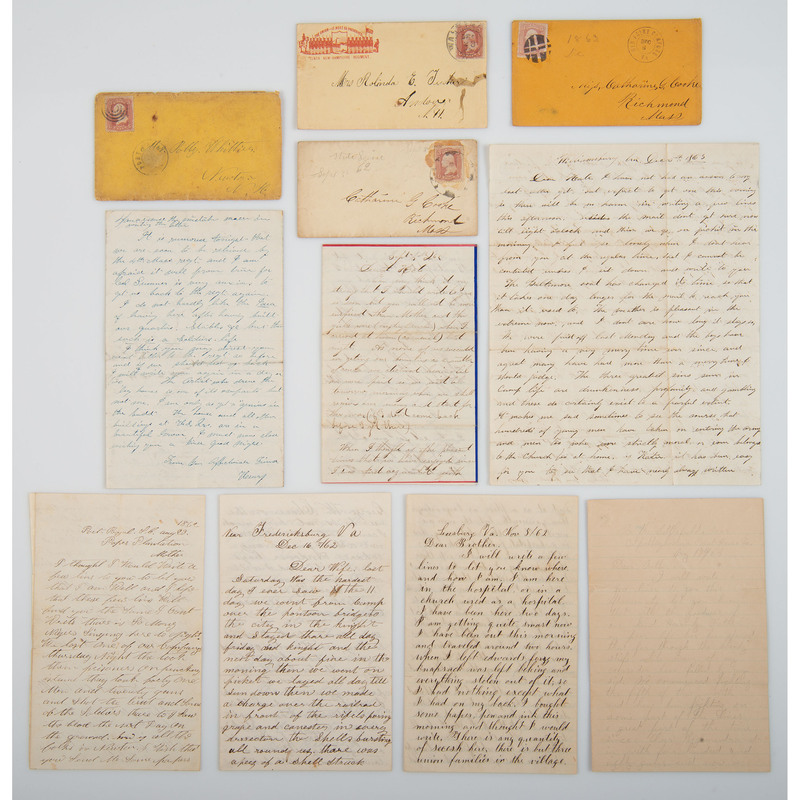 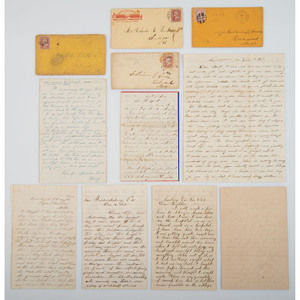 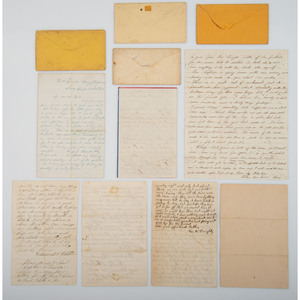 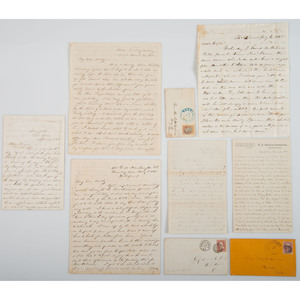 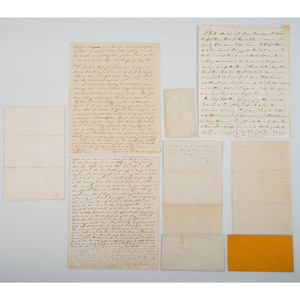 Unidentified soldier who signed the letter, "Dick," on US Christian Commission stationery, Nashville,Tenn., April 24, 1864. To a girlfriend, Mary Lawrence in Pepperell, Mass. He tells her that he has been ordered to rest, having been exhausted by the 30-hour train ride to return to his unit.

SMITH, Charles, Lieut. City Point, VA, Oct. 13, 1864. 1st CT Artillery. To Emma Leach, his fiance. With cover having a "target" cancel. Most of the content deals with the war. "There is glorious news from Sheridan again this morning....Every victory that we gain now will be as much help towards re-electing "Old Abe" as towards putting down the rebellion... The great and final struggle must soon come..."

BRIGGS, Henry Shaw, Genl. (1824-1887). Three letters. Annapolis, Apl. 27, 1861. To his son, George, "This is your birthday & I address the few line which I have this morning to you in honor of the day." Talks about just completing an inspection of Fort McHenry.

2) Batt. March 10, 1863. To Molly (wife) and 3) 183 G. St. Washington, DC, May 8, 1865. Also to his wife. Most of these are personal. In the second he takes a couple pages to describe the church services he attended on Sunday. He seems to be avoiding battle descriptions (although the last was written after Lee's surrender).

Henry Briggs was a captain in the 8th Regiment Massachusetts Volunteer Infantry. After promotions, he became the commander of the 10th Regt. MA Vols. He was seriously wounded at Fair Oaks, and afterward was promoted to Brigadier General and served in primarily administrative positions with just the occasional foray into the field. He resigned in December 1865.

GORHAM, George, Rev. Baltimore, July 6, 1863. To his wife. He tells her about a fellow minister that the went to hear the previous day. "Our reg. left this morning on the cars for Frederick in this state, 60 miles west of here. I expect to follow them tomorrow morning. They may be in a battle with the remnants of Lee's army [this would be just after Gettysburg]. Rebel prisoners in large droves are brought into this city from time to time, also hundreds of wounded." Gorham enlisted as a chaplain with the 46th MA Infy. and the 1st MA Cav. He left service in June 1865 in Washington.

Unidentified writer, signed only "Henry." Head Quarters Army of the James, Dec. 4th, /64" The letter is addressed to "Dear Katie." The letter does not contain a lot of war news, but he does mention that he has been to Bermuda Hundred with deserters and just returned. Other than that, most is personal.

A second letter is addressed to Catherine Cooke in Richmond, Mass. also signed "Henry." This would appear to be the same person, likely with a Mass. regt. Dated Sept. 5, 1862, this one is largely personal.

A third letter to Catherine Cooke with Williamsburg, VA, Dec. 5, 1863. "The three greatest sins seen in Camp life are drunkenness, profanity, and gambling and these do certainly exist to a fearful extent....There is a great deal of excitement just at present in this regiment about reenlisting with the Veteran Army for three years longer but I can't quite see the point yet."

WHITTIER, Edmund S. 3rd NH Infy. Port Royal, SC, Aug. 23, 1862. Pope's Plantation. To his mother, Polly Whittier, with cover. He complains about the African Americans singing so loudly he can't write. He mentions that they lost one of their company a few days previous.

TUCKER, Gilbert. Near Fredericksburg, VA. Dec. 16, 1862. He extensively describes his experiences at Fredericksburg. "Saturday was the hardest day I ever saw. The 11 day we went from Camp over the pontoon bridges to the city in the knight [sic] and staged thare all day friday and knight and the next day about five in the morning then we went on picket. We layed all day till sun down then we mad a charge over the railrad in front of the rifels poring grape and canester in every direction the shells bursting all round us." The 10th New Hampshire regiment was organized in the summer of 1862 and fought most of its battles in the Eastern theater.

DOUGHTY, George. 17th Maine Infy. Leesburg, VA, Nov 5, 1862. To his brother. "I will write a few lines to let you know where and how I am. I am here in the hospital or in a church used as a hospital. I have been here two days... my knapsack was left behind and everything stolen out of it, so I had nothing except what I had on my back....There is a hospital full of sick rebel soldiers here...one rebel shot just out of town, as our brigade teams were passing along the road he came out from his house with his rifle in his hand and aimed at one of the men and snapped his rifle and it did not go, and one of the guard with the teams put a ball right through him, and served him right. They are doing big business out here fighting now hey are driving the rebels toward Richmond and following them up as fast as they can...." More.

Another letter from Doughty is dated May 17, 1864. On the Battlefield near Spotsylvania Court House. To his mother. Bloody, battle, many of his comrades have been killed. We commenced fighting the 5th and been fighting on some part of the lines ever since. Our regiment went in with 480 men and now we have only about 150 left. Took about 7000 rebel prisoners.