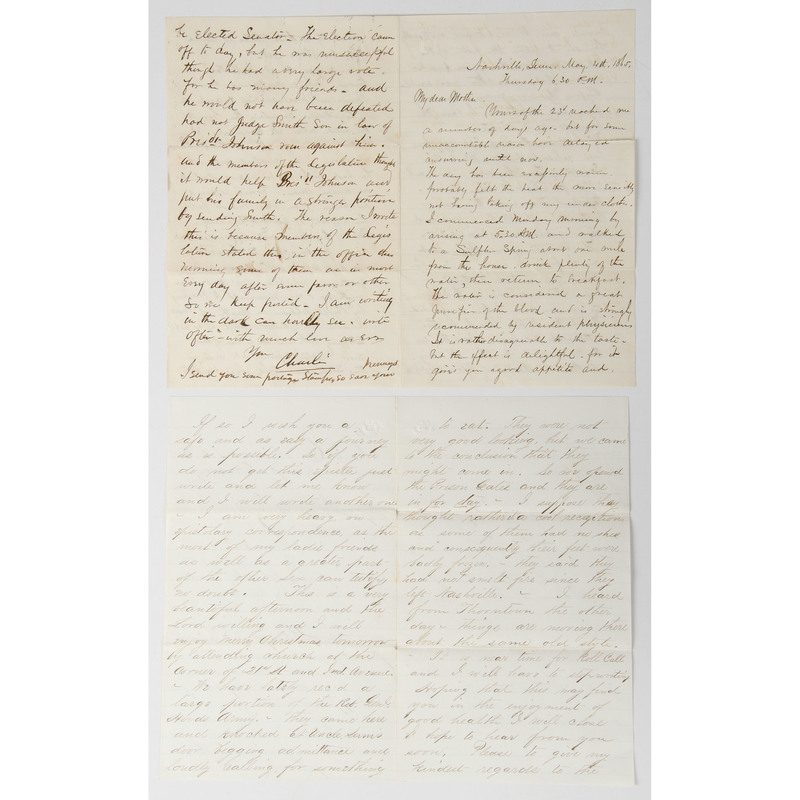 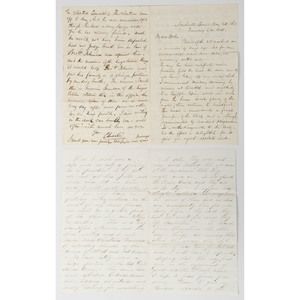 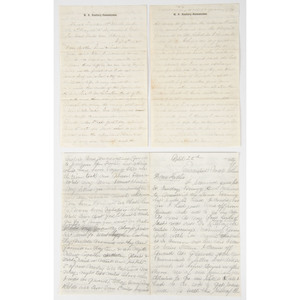 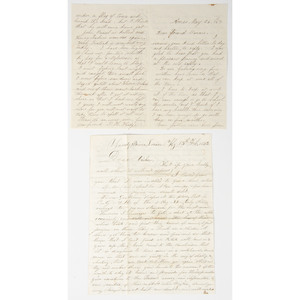 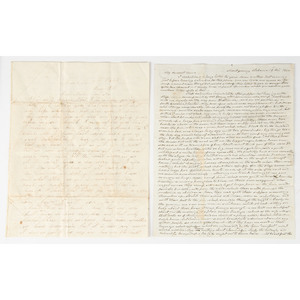 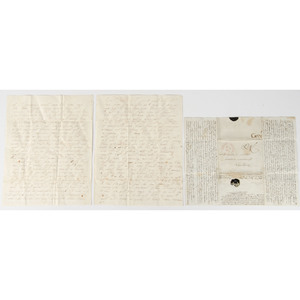 Lot of 8 letters written by different authors, 1860-1865. Many are Union soldiers' letters and contain interesting war news with detailed descriptions of their Confederate foe. Includes:

Masters, Thomas. 4pp, 7.75 x 9.75 in., Montgomery, Alabama. December 19, 1860. Addressed to his daughter, Anna Masters in New York. Masters has left his wife and daughter behind on his trip to Alabama, presumably in pursuit of business opportunities, which lead him on to New Orleans, Savannah, and Charleston. His focus centers on the travel conditions he encounters, as well as the idiosyncrasies of Southern people and their customs, including the deplorable state of their food: “At breakfast the coffee was wretched, the butter hard as flint and as white as chalk and abominable. . . You need not be afraid while I am gone that anything will happen to me from excess eating. . . In all this southern country I do not see any indications of the smallest approach to taste or delicacy and refinement.” Even at church, the Communion fare was deemed inadequate: “Such bread and such wine. I never tasted anything half so bad. I know the place is poor and apart from civilization but with a little painstaking they might do better.” Concludes with extensive discussion of Anna’s spiritual well-being.

Blake, Cincinnatus (1830-1918). Second Lieutenant, Co. G, 4th West Virginia Infantry. 4pp, 7.5 x 9.75 in., Sandy River, Louisa, Kentucky. February 15, 1862. Addressed to “Visha,” (?) the wife of Blake’s friend. In the letter, Blake describes his fellow soldiers as “Gentleman Loafers” without much to do, except for when he manages “to get a shot at the rebels occasionally and call one mine. We hear of their where[a]bouts, and first they know of mine I just pounce on them like a hawk on a chicken. . . Some come that are so guilty in the way of stealing & shooting that we can’t let them go again. Others, we try and make them give bonds to the amount and stay at home and provide for their families, give assistance to the Federal army, and information to our scouters of the rebels when the can.” He also recounts the particularly exciting pursuit of a nefarious Confederate, armed with an Enfield rifle.

Irwin, Samuel. Private, Co. B, 35th Iowa Infantry. 4pp, 7.75 x 9.75 in., Cairo, Illinois. March 7, 1863. Addressed to his mother, Elisabeth. He tells her that he suspects the war will end soon, given the deplorable circumstances faced by Confederate troops: “. . . the war can’t hold out much longer for the Rebels are about starved out and can’t get anything to eat. We have seen some of the Butternuts, as we call them. They say that they have lived on parched corn for two and three weeks. They say that they [have not] any salt and can't get it for love or money. . . they could not stand it that way much longer.”

Clark, Elisha Edwin. Private, Co. A, 27th Maine Infantry. 4pp, 4.75 x 7.75 in., “Encamped near Chantilly.” April 22, [1863]. Addressed to his father. Clark writes primarily of his picket duty and his encounters with seemingly rogue Confederate soldiers, noting, “We see the Rebels very frequently; always prisoners. Some 90 went by here last week, they are all around us. They are farmers in day time & at night collect together at a certain place and make a raid or attack our pickets. . . I don’t not wonder that our government is so slow in crushing this Rebellion when every inhabitant is doing all they can to assist their army. If they are not in the army, they can harass our army by attacking our pickets and making frequent raids.” By the end of 1863, Clark re-enlisted as a Sergeant with Co. L, 2nd Maine Cavalry. He was later wounded and taken prisoner at the Battle of Marianna, Florida on September 27, 1864 and was granted parole on January 15, 1865.

Hodge, F.H. 4pp, 4.875 x 8 in., Ames, New York. Civilian letter addressed to the author’s friend, Fannie Bingham of New London, Connecticut. Hodge shares war news from common acquaintances, including a vivid anecdote of Confederate behavior after Union troops retreated from the front lines of battle: “John wrote yesterday that when they retreated the Reb’s took possession of the field and stripped the dead of all the clothes they had on and if there were any wounded on the field they were taken too.”

Berry, Giles G. Private, Co. B, 17th Maine Infantry. 4pp, 5 x 8 in., “Breast Works near Petersburg, Va.” September 6, 1864. Addressed to his siblings and written on Sanitary Commission stationery. Content focused on military support for General George McClellan’s presidential campaign and the Confederates Berry encounters on picket duty. Of McClellan, he writes that “there was great rejoicing through the army. The army will surely go for ‘Little Mac.’ Gen. Hancock, our corps commander, made a speech to the troops yesterday advising them to vote for Mac. . . Every true and loyal man who loves his country will vote for him.” Further, Berry has gained insight on the election from the enemy soldiers he encounters, writing that “the Johnnies are very quiet on our front and very friendly too. . . We do not fire on each other while on picket and we meet each other halfway between the lines and exchange coffee for tobacco. They say they are tired of the war but if Lincoln is elected they will fight another four years.”

Chafee, Thomas F. Musician, Co. C, 15th Veteran Reserve Corps. 4pp, 4.75 x 8 in., Camp Douglas, Chicago, Illinois. December 24, 1864. Addressed to Captain A.U. Craven of Co. D, 72nd Indiana Infantry. Highlighted here is Chafee’s pitiful description of surrendering Confederate soldiers. He tells Captain Craven that Camp Douglas has “recently received a large portion of the Reb Gen’l. Hood’s Army. They came here and knocked on Uncle Sam’s door begging admittance and loudly calling for something to eat. . . some of them had no shoes and consequently their feet were badly frozen. They said they had not smelt fire since they left Nashville.”

“Charlie,” possibly a Union officer. 4pp, 5 x 8 in., Nashville, Tennessee. May 4, 1865. Addressed to his mother in New England. Though the author’s identity is unknown, he covers a wide range of topics in rich detail, including the perceived medicinal value of the sulfur water found in Nashville and the economic impact of Tennessee’s secession, most notably the resumption of trade under new treasury restrictions. Charles writes in part, “the receipts of our office [a Union-run trade office] last month from the renting of plantation houses – fees on trade authorities and many other sources – was over $300,000. So you see some of these confounded rebels have to pay dearly for their attempted secession. . . they still cling to their old doctrine of states’ rights and try to think there is some hope for them.” He also shares that his friend “Mr. Maynard” launched an unsuccessful senate campaign in Tennessee. He lost, apparently, because his opponent was President Andrew Johnson’s son-in-law.