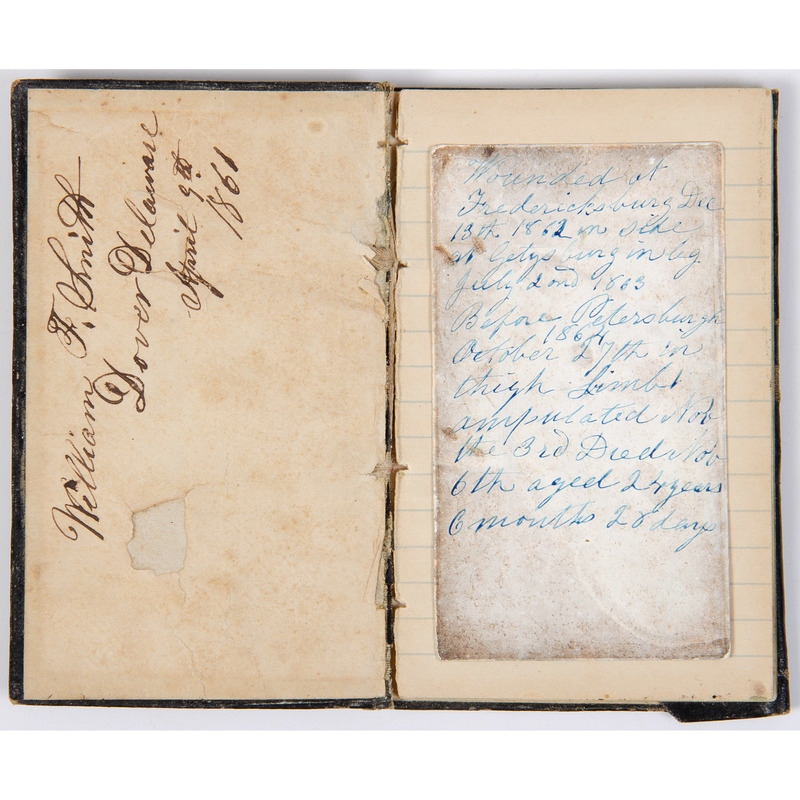 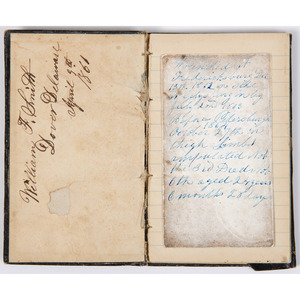 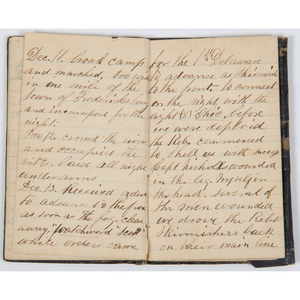 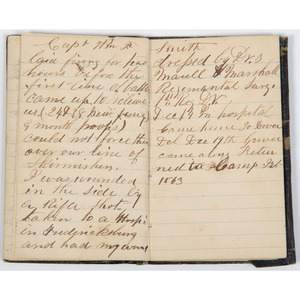 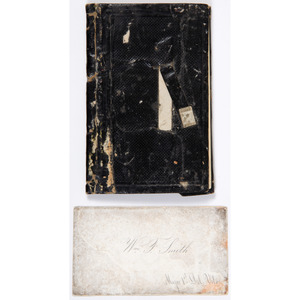 Pocket diary belonging to Major William Frances Smith (1840-1864), 1st Delaware Volunteer Infantry regiment, 15pp, approx. 2.75 x 4 in., detailing his regiment's movement in the fall of 1862 from Harper's Ferry to Fredericksburg and his subsequent action at the Battle of Fredericksburg.

The Delaware 1st Infantry served in the Eastern Theater and experienced near constant action throughout the war. William F. Smith heeded the call to service almost immediately after the onset of the war, enlisting as a sergeant in a 3 months regiment on April 18, 1861. Records indicate he re-enlisted for another three years with the Delaware 1st on August 10, 1861, and participated in some of the most significant and bloody engagements of the war including Antietam, Fredericksburg, and Gettysburg.

The diary is inscribed on the inside front cover "William F. Smith / Dover Delaware / April 9th / 1861" - a notable date in that it was Smith's 21st birthday. The first diary entry occurs over a year later on October 30, 1862, and then entries are made daily through November 18, 1862. These brief entries relate circumstances such as being deployed as a skirmisher, forming a line of battle to support the 8th Rhode Island, marching through Piedmont Gap to Warrenton, and being reviewed by General McClellan on picket. Then on November 18, Smith writes, "18 on picket along the Rappahannock river, Teamsters out on a foraging party captured by the Rebel cavalry - ten (10) in number." It is uncertain if Smith was captured along with the teamsters (the entries cease until December 11) and if so how he might have escaped captivity. However, by December 12, 1862, he has arrived with his regiment at Fredericksburg. On December 13, in one of his lengthier entries, Smith describes the Battle of Fredericksburg, writing in part: "Received orders to advance to the front as soon as the fog clear away, 'watchword 'Scott' while orders came for the 1st Delaware to advance as skirmish to the front to connect on the right with the eight (8) Ohio, before we were deployed the Rebs commenced to Shell us with success Capt Nicholls wounded in the leg myself in the head...laid firing for two hours before the first line of battle came up to relieve us...." Smith indicates later that he was in the hospital before returning home to recuperate. The final entry in the diary reads simply "Returned to Camp Feb 1863."

While February 1863 marked the end of Smith's diary entries, he would continue to fight valiantly for his country. A calling card accompanying the diary is identified "Wm. F. Smith / Major 1st Del. Vols." on the obverse with the verso containing a handwritten note stating in full: "Wounded at Fredericksburg Dec 13th 1862 on side at Gettysburg in leg July 2nd 1863 Before Petersburgh October 27th 1864 in thigh Limb amputated Nov the 3rd Died Nov 6th aged 24 years 6 months 28 days." Military records confirm Smith was severely wounded in the right leg at the Battle of Boydton Plank, and died of wounds on November 6, 1864.

Diary cover worn and rubbed through in places, but binding remains intact. All text legible.