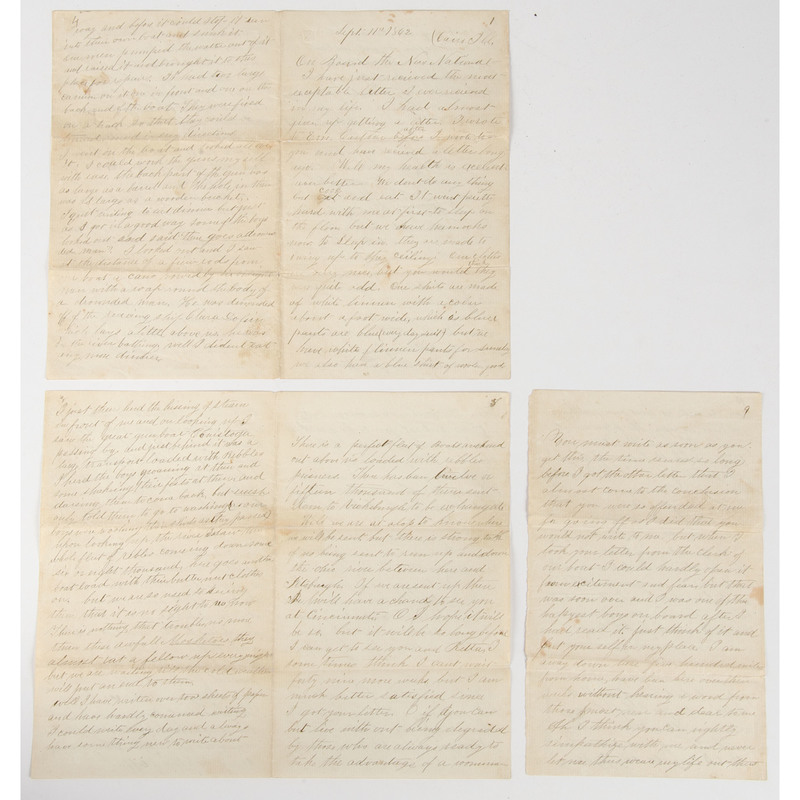 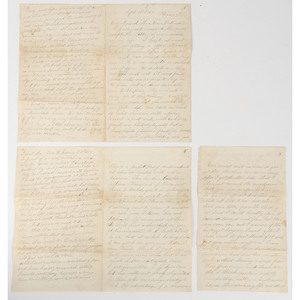 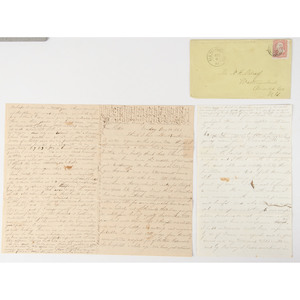 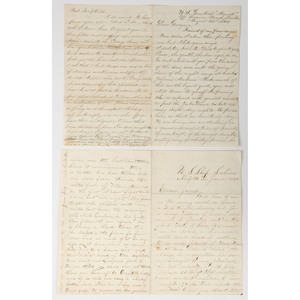 Lot of 5 Civil War-era letters written by men serving in the United States Navy and the Army Signal Corps. Many of the naval letters were penned on board ships including the Sabine, New National, and the Naiad, with content related to Confederate prisoners, daily life as a sailor, and trips ashore on Southern soil.

Hockett, Mahlon (1838-ca 1863). 9pp, 4.75 x 7.75 in., “Cairo, Illinois / On Board the New National.” September 11, 1862. Addressed to his wife. Records indicate that Hockett enlisted in August of 1862 as an army engineer in Missouri. He was likely assigned to the Navy and stationed on the New National, a side-wheel steamer seized by the Union Navy at Memphis after they had destroyed the Confederate River Defense Fleet in June of 1862. He tells his wife of his novel life on board the ship, with detailed descriptions of his clothing and living quarters as a seaman. A few weeks ago, he “saw the boat that was captured from the rebels. . . the one that had five thousand stands of arms aboard. It was brought here by the gunboat Lexington and anchored close to us, with a large Rebel flag at the flag staff.” Also with discussion of the gunboat General Price, recently reclaimed by Union forces at Memphis.

Metcalf, Francis (1843-1905). Private, Signal Corps Regiment, United States Army. 5pp, 5 x 7.75 in., “Signal Camp near Fortress Monroe, Va.” August 3, 1863. Addressed to his father, Nehemia Fitch Metcalf in Oneida, New York. Written shortly after Metcalf’s transfer to the Signal Corps from the 117th New York Infantry, the letter contains detailed descriptions of his living conditions and the organization of his unit, including the ranks and salaries of his comrades.

“Jud,” a ship’s carpenter. 4pp, 5 x 7.75 in., “U.S. Gunboat ‘Naiad’ / Off Tunica Bend, Miss. River.” August 22, 1864. Addressed to his friend Georguis.  Humorous letter teeming with French and Latin phrases, idioms, and unique syntax. Chief among the author’s concerns is the lack of whiskey onboard the ship: “We are dwelling in a grand time of paucity, of rum bereft, of the drought, droughty, wasting away of whisky-famine. . . One good a sufficient sup of liquid whisky nourishment would seem like the shadow of a great. . . rock in a dry & thirsty land.” Regarding his military service, Jud writes in part, “For hath not Uncle Sam, who dictates vocations, who doth (ex officio) all things well – whose fiat is old justicia in person, hath not Federal Infallibility elected to consider me a Ship Carpenter! . . . A man who might be Dominie, Squire, Professor, Doctor, Mister. . . to settle down among the shavings, mere chips. Mais toute le meme chose.” His descriptions of engagements with the enemy are equally flowery: “We have been at quarters to administer a few shell & shrapnel to some shore rebs in castigation of their placid impudence in firing on a transport. Rebelry refuses to reply, and we sheer off & leave them in disgust.”

Clark, Oliver C. (1843-1914). Landsman assigned to the USS Sabine, a naval sailing frigate built in 1855 and one of the first ships to see action in the Civil War. 4pp, 5 x 8 in., “U.S. Ship Sabine / Norfolk Va.” January 31, 1865. Addressed to Clark's cousin James. The Sabine’s early wartime service included patrol along the east coast in search of Confederate raiders, but in August 1864 she was ordered to Norfolk to serve as a training ship for Navy apprentices. Clark enlisted that September and describes here his off-duty pursuits in Norfolk and Hampton Roads, including trips to the theater and a local church. He also describes his participation in “a negro prayer meeting which knocked anything I ever saw in the religious line higher than a kite. They roared like wild beasts at a menagerie and seemed to labor under the impression that the one that could make the most noise was the best Christian.” He also mentions a potential campaign for alderman in Saco upon his return and would go on to serve as mayor of the city (1878-1881).

Ruud, J.R. [?]. 4pp, 5.25 x 5.75 in., Hampton Roads, Virginia. November 23, 1868[?]. Addressed to his wife in Boothbay, Maine. The author describes his harrowing, hurricane-plagued trip from Annapolis, Maryland to Hampton Roads, noting that it “stormed and blew a gale or hurricane and it was so thick that I could not run and had to anchor and ride it out just to the northward of Annapolis. We let go one anchor. . . and we let go the second anchor and payed out all the cable and chain we had a fetched her up and I thought she would tear herself to pieces. She would go all under sometimes but she lived through it.”