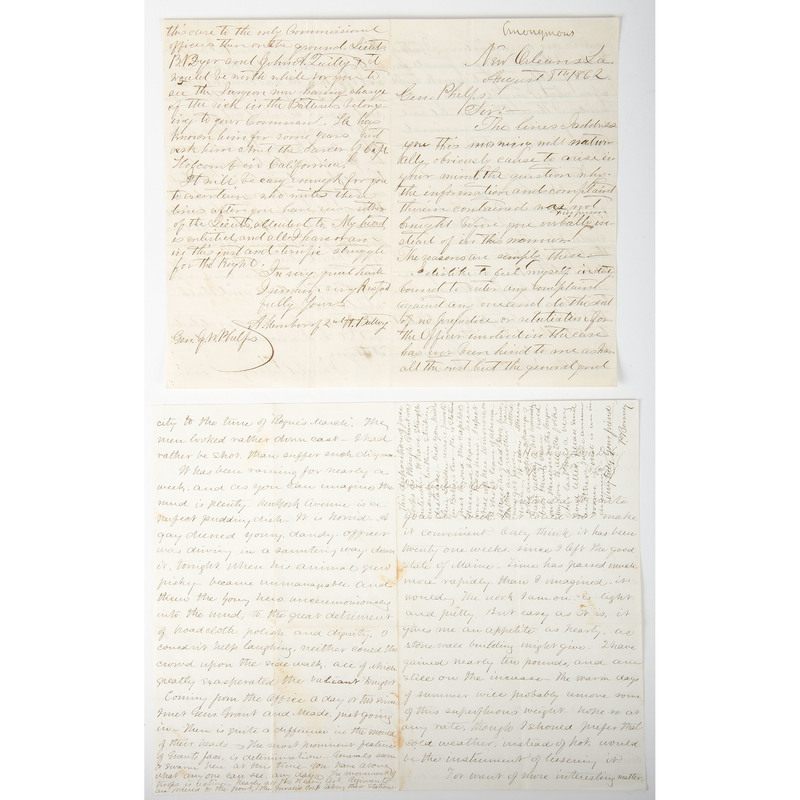 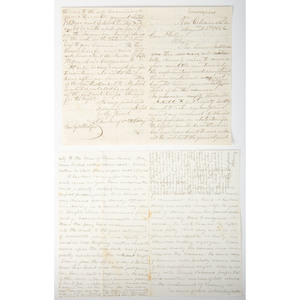 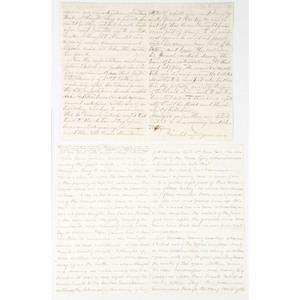 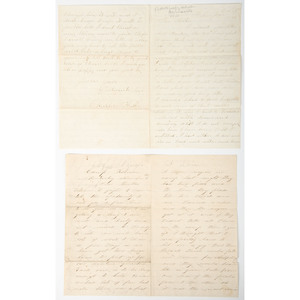 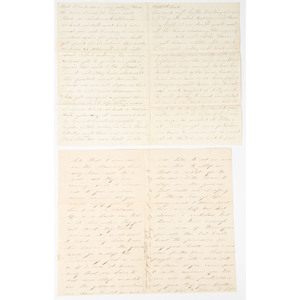 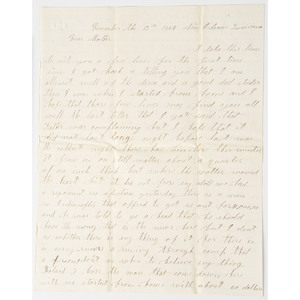 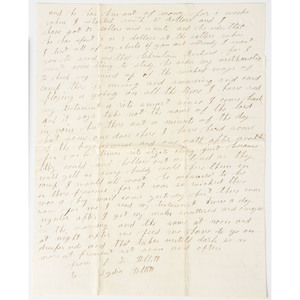 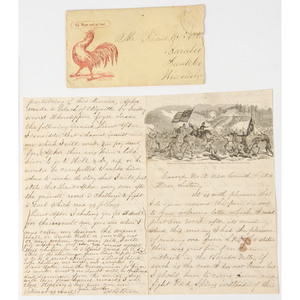 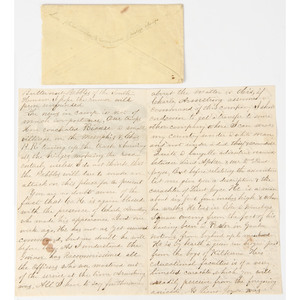 Lot of 11 war-date letters written by different authors, most of whom were Union soldiers. Letters span 1861-1864 and contain observations on camp life and hierarchies, including the inebriation of officers and the impact of General Ulysses S. Grant’s restructuring of the Union Army. Additional content includes a vivid description of soldiers dancing with a group of black performers at Camp Roberson, Kentucky, as well as commentary on the conduct of Union troops at the nation's capital by a Washington, DC businessman.

Austin, Isaiah William (ca 1833-1898). Private, Co. H, 4th Michigan Cavalry. 4pp, 4.75 x 7.75 in., Postmarked from Camp Dennison. April 4, 1863. Addressed to his sister, Delight Cornwell Austin. In his letter, Austin shares the details of an inflammatory encounter with Wilson, a member of his company and a “damned half-blood Irishman.” Given his boorish nature and affinity for spirits, Wilson “gets put in the guard house about every other day.” On one occasion, “he went out and got drunk...and the captain and he got into a quarrel...The captain drawed [sic] his saber and struck him over his shoulders and broke his saber. And then the colonel came up and ordered him put in the guard house.” Their handling of the incident has engendered great respect with Austin for his superior officers, and he tells Delight that he and his fellow men gifted their colonel, Robert Horatio George Minty (1831-1906) with “a sword that cost eighty dollars [from] Detroit City.”

Bonney, P. Native of Maine currently working in Washington, DC as a businessman. 4pp, 5 x 7.75 in., Washington, DC. April 4, 1864. Addressed to his cousin, Clive. Bonney tells of several wartime “street scenes” he has observed in the capital, including soldiers sleeping on church steps or on the steps of government buildings. Notably, and rather pitifully, he also describes “a blue coat in an unusual position – stretched out at full length, his feet at the middle of the sidewalk in the filthy vomit of the drunkard upon himself. . . people passed him in scores, but there he remained...I thought of some mother, wife, sister or children away off at the North in whose thoughts and dreams no such wreck was pictured.” Bonney also witnessed the drumming out of two soldiers accused of theft, the bucking of a “young dandy officer” from his horse “unceremoniously into the mud to the great detriment of...cloth, polish, and dignity,” and meetings with Generals Grant and George Meade: “There is quite a difference in the mould of their heads. The most prominent feature of Grant’s face is determination.”

Doughty, George (ca 1842-1915). Private, Co. E, 17th Maine Infantry. Two letters, each 4pp and addressed to his brother, Royal. The first, written at Camp Bullock, Virginia and dated March 30, 1864, contains further ruminations on Grant, most importantly his restructuring of the Union Army following his assumption of command of all United States armies on March 12, 1864. Doughty writes of his revisions, in part: “Gen. Grant is making quite a change in the army. He has consolidated the five Corps into three and some of the poorest meanest Generals he has sent to the rear and put new ones in their places, and is reinforcing the Army considerable. He is taking some of those Government beats around Washington, Baltimore and other places that have been in the service two and two and half years and never seen a fight or smelt powder and putting them into the field to share with us. If he keeps on we shall have a big Army to start with this spring and that is what we need.” Later, from Brandy Station o April 25, 1864, Doughty considers the implications of Grant’s whiskey ban and speculates on the eventual fall of Richmond: “[Grant] is a fine looking man. I like the looks of him very much. He don’t look as if he drank as much whiskey as most of the Generals do and best of all he has put a stop to all Commissaries and Sutlers bringing it into the Army. It is one of the best orders he has issued. I hope we shall not have so many drunken Officers now...Some [men] feel sure that we are going to hoist the Stars and Stripes over Richmond this summer. As for myself, I don’t prophecy, time will tell...[but] if Richmond is ever taken by our Army, I want to be one of the number.”

Fuller, Chares W. (ca 1838-1864). Corporal, Co. F, 7th Wisconsin Infantry. 4pp, 4.75 x 7.75 in., Arlington, Virginia. December 29, 1861-Janyary 1, 1862. Addressed to his mother, Lepha (“Leafy”) Handy Fuller in Harrisville, Wisconsin. Officer inebriation seemed to plague Fuller’s regiment as well, given his description of his captain’s drunkenness: “He has been drunk most of the time since we have been here, so we have proffered charges against him for drinking and neglect of duty and he will be court martialed.” He also shares with her an account of a division drill, staged by General McDowell: “We fought a regular battle, only we had blank cartridges and there was no enemy there. There was two men hurt in the Second Regt by the bursting of a gun. McDowell’s whole division was there.” Fuller was later taken prisoner at Haymarket, Virginia in 1863 and imprisoned at Belle Island and Andersonville. He died of disease during his confinement.

Porter, Albert B. (ca 1842-1910s). First Sergeant, Co. H, 17th Wisconsin Infantry. 4pp, 4.75 x 7.5 in., “Camp No 12 near Corinth.” September 12, 1862. Addressed to his sister. Porter discusses some personnel changes within his company, following the destruction and evacuation of Rienzi, Tennessee. Most notably, he writes passionately of his dislike for the newly recommissioned Captain Charles Armstrong, described as a “thief and scoundrel.” He also recounts a “laughable adventure” between his first and second lieutenants, wherein Lieutenant Samuel Apker “made a breach of etiquette by breaking wind” during dinner with Second Lieutenant Miles Joyce. Offended, Joyce challenged Apker to a duel, but, as a result of his quick temper, was placed “under arrest & no doubt will be cashiered and dismissed from the service.”

Zeigler, Philip. Three letters written prior to and just after his enlistment as a private, Co. H. 118th Ohio Infantry. Ziegler wrote the first two letters to his sister, Julia, while he was working on the farm of a family friend in Camp Paris, Kentucky. He speaks of his labor and his income, which he sends home to Julia and his mother. His third letter was written from Camp Roberson on November 4, 1862 just two months after his enlistment in a newly organized unit. He tells his brother, William, of a recent “fun night” at camp: “There was about a dozen Negroes in camp last night; they had two fiddles and the bones. They played till ten o’clock and we danced a while and then the Negroes got at it and if they didn’t take all down in the camp then I give up...[they] could take me down for shuffling and they would bounce like a gum ball from one side of the platform to the other.”

Anonymous battery clerk, Co. H, 1st Vermont Infantry. 4pp, 4.5 x 7.5 in., New Orleans, Louisiana. August 8, 1862. Addressed to General John Wolcott Phelps (1813-1885). This unnamed informant shares his concerns over the “use of intoxicating beverages to such excess” by Captain Pythagoes E. Holcomb that “he became entirely unfit to attend the duties resting upon him, and disgracing his command and the Noble Green Mountain State.”

Letters with creasing as expected, with scattered areas of spotting and staining. Penmanship varies, but ink is very legible.