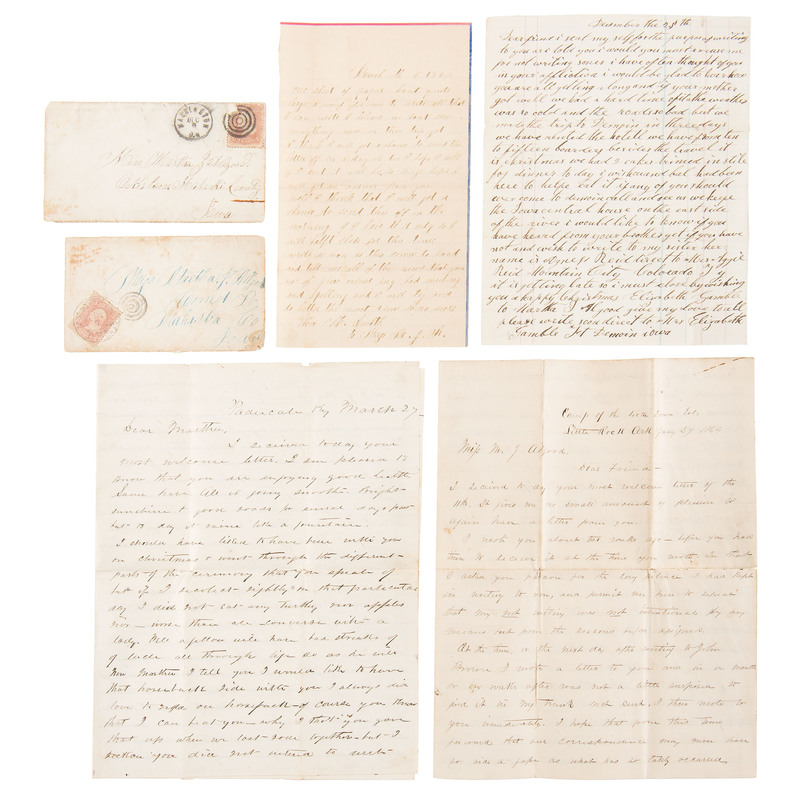 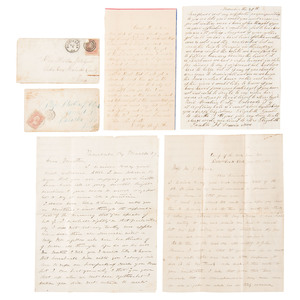 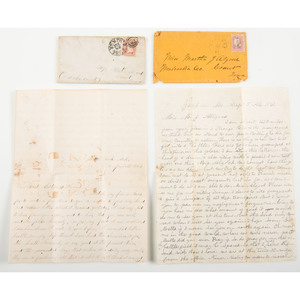 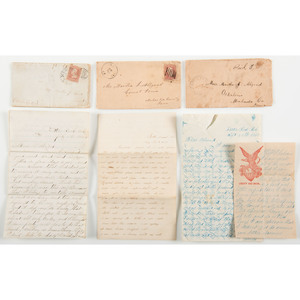 Lot of 9 letters and one envelope written to Comet, Iowa citizen, Martha Allgood, featuring six from Civil War soldiers, the rest presumably from friends and family, dating from September 1861 to May 1865.

In September of 1861, Private Washington Glass of the 7th Iowa Infanry writes to Martha Allgood from Jackson, MS, “I am about 437 miles from your place in a Strange Land+ the enemy around us thick but we Stand to our posts willing to die for our Country + nation.” He relates that his regiment had arrived at their current camp after a 100 mile march. He noted severely blistering feet. “We are at this time 10 miles from the Mis – River. Waiting for orders to march.”

W.H. Smith, regiment unknown, writes from Little Rock, AR, in September 1863. He states that “Some of our boys worked all night to fix down the pontoon Bridge so we could cross the river...” This letter discusses some of the movements made by Union General Steele and CSA General Price. “I heard the Cannon roar and old Price in full retreat they follow him for Seventy miles and captured considerable of prisoners and six peaces of artillery...” Smith also relates that the CSA had badly treated an elderly citizen because he expressed sympathy for the Federal cause.

From “Camp of the 40th Iowa Vols.,” Little Rock, AR, a soldier whose signature is difficult to discern, possibly "Custer" or "Houster," writes Martha in January 1864 that there are many Union people in that part of the state. He also states that the Rebels were not as chivalrous as he had been led to believe. “More women are dependent on charity than you would suppose...there are about 7000 rations given daily to the poor at this place.”

In July of 1864 Hank Smith writes from Little Rock, AR, to Miss Allgood...“Well I have a little over 18 months to serve in this little United States Army and then I think I can come home. You said that all of the girls was a getting married...I don’t think there is enny Rebbles near here only some Busch Whackers. There is some of them all through the country there was 15 or 20 captured out here the other day.” Smith also asks Allgood to write directly to the Pioneer Corps, First Division, Army of Ark., Little Rock when responding.