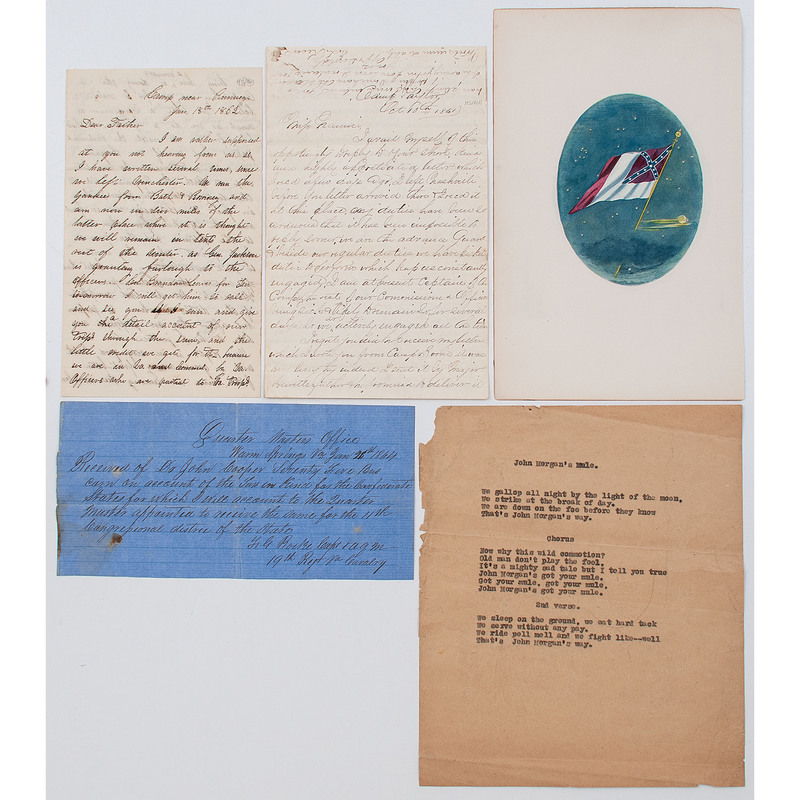 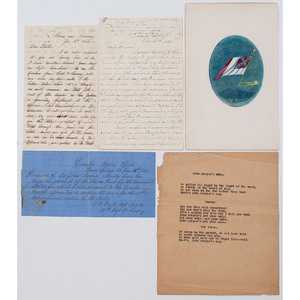 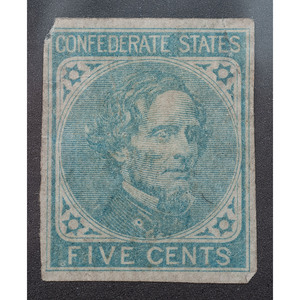 Hand-painted card of the Third Confederate National Flag, the so-called "Blood-Stained Banner," against a starry sky. Lower edge of oval has "The Warrior's Banner Takes its Flight to Greet the Warrior's soul." The 3rd National Banner was adopted March 4, 1865 - nearly the end of the war. On card 5.5 x 9 in.

ALS, Camp near Romney, Jan. 18, 1862, 3pp. From a J.H. Johnson, unit not specified. Mentions that they had just been through battles at Bath and Romney and would probably stay where they were through the winter in tents. He does mention a Col. Brandon leaving on furlough. The highest ranking Brandons we could find were Nathan (14th TN) and Stephen (10th TN). Nathan was promoted to Lt. Col. during the war. A likely candidate in the 14th TN is a James Hickman Johnson, who enlisted in June 1861 and surrendered at Appomattox CH. He achieved the rank of Major during his time of service. Another issue he addresses in his letter is that he feels that the command of Confederate forces favors Virginia troops, even though his unit was in the front of the battle at Romney. An easy-to-read Confederate letter.

A second letter, Camp Taylor, Oct. 10, 1861, 4pp+, signed E.L. Kient (?). He mentions that he is captain of a company, but there does not seem to be enough information to identify him. He mentions encountering people he knows in Nashville on several occasions, so he may be in a Tennessee unit.

Typed song lyrics, "John Morgan's Way." "We are down on the foe before they know / That is John Morgan's way." Two stanzas and a chorus.