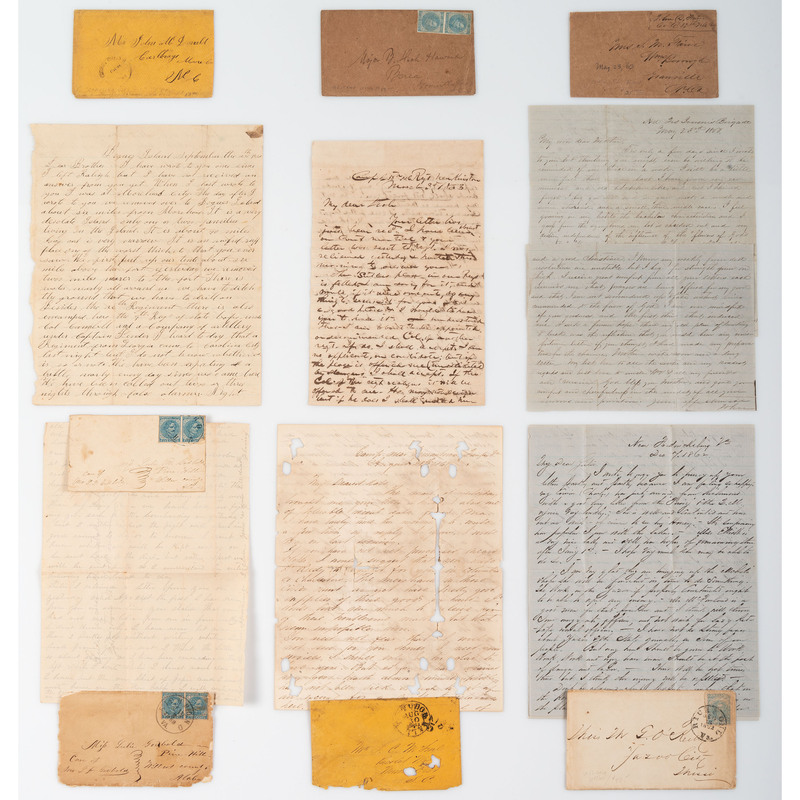 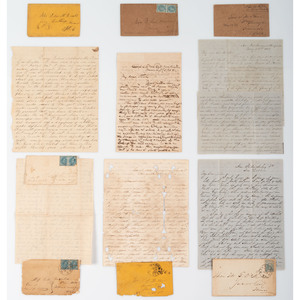 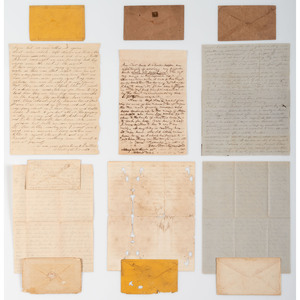 Lot of 16 letters and 2 documents.

Raleigh, Aug. 24, 1861. Retired attorney "as a matter of favor to you" addresses his client's concern about bonds he holds, presumably on northern interests. [illeg. name]

JONES, Thomas to John Payne, Trammville, VA, Feb. 3, 1864. He mentions "enlistment substitute men and the conscrips - some of them puts on long faces but I don't think it will do them much good.... I expect to be hoe in a few days on my way to North Caroliner. I will cawl to see you if you doanot lev before I get thar."

Ledger page of merchandise, some to confederates, such as Capt. J.C. Whitwell, Confederate States Naval Hospital; Genl. Breckenbridge (Breckinridge??); Presd. Davis. The Confederate President purchased household items from this merchant, such as chairs, an Ottoman, a table, a rocker.

Incomplete letter, 4 pages on legal-sized paper. Plantation news - what crops to plant, what repairs need to be made, etc. Written by an overseer or manager to the owner. Mentions that the slaves are working very slowly, and if they don't get better, he will recommend selling them.

WOLH (?), Theo? Short note from Greensboro, NC, Aug. 28, 1861. Not war-related, but the "home front" also had issues, not the least of which was disease. "One of the Edgeworth girls, a new one, died last night. Her body left on the train this morning for Virginia in charge of Prof. Sterling. Mrs. Albright, wife of the printer is very low, not expected to live."

McDONALD, Neill, 26th Regt NC. Enlisted Moore Co. June 1861, KIA Bristoe Station Oct. 14, 1863. To his brother, John. "After I wrote to you we removed over to Bogues Island...It is an awful ruff place, one of the worst thickets that you even saw. We first put up our tents about six miles above the fort. Yesterday we removed two miles nearer to the fort...Besides the 26th regiment there is also encamped here the 7th regt. of state troops under Col. Campbell and a company of artillery under Captain Pender. I heard that a regiment from Georgia came to Carolina City last night  but I do not know whether it is so or not. We have been expecting a battle every day since we came here. We have been called out two or three nights through false alarms.... There has not been a day passed since we came here that we have not seen some yankee vessel. Day before yesterday two were in sight. I do not believe that they will ever attack this place. It would be a dangerous undertaking for them to try to land here."

WORTHAM, George. Lieut. Col. 50th NC Infy. Camp of 50th NC Regt. near Kinston / March 3d, 1863.  To Major Dick? Howard. Part of it has to do with an application made for a staff position. He also mentions "Miss Ann," possibly the Major's daughter, in whom Mr. Wortham seems interested.

FAIN, John, Co C., 12th NC Infy, "Iverson's Brigade," May 23, 1863, 4pp. To his mother. "'Tis only a few days since I wrote to you but thinking you might even be willing to be reminded of me twice a week... I have grown very economical and old bachelor-like, and lest I should forget I beg you will send in your next a needle and some thread and a small, thin needle case I feel growing in my habits the bachelor characteristic, and I guess from the symptoms, my lot is chalked out and my destiny independent of the influence of the "flowers of god's creations," "Heaven's gifts to man," "help meets,"...

KIMBROUGH, Flavius F. Vo. I, 6th AL Infy. Cooking yard near Guinea Station, Va., May 2nd, 1863. To Julie Godbold(?) Talks about being sent to the cooking yard with Nat Lyon to cook for the troops. Cooked all night, then packed up and moved 8 or 10 miles, then cooked all night again. During the move his knapsack was stolen, so he had no clothes or writing supplies, etc.

O'Reilly, John (?). Near Fredericksburg, VA. Dec. 7, 1862. To Brother (maybe Thomas?). 3pp "I am very glad they are bringing up the "Mobile" & hope she will be finished in time to do something the works on the Yazoo if properly constructed ought to be able to repel any enemy....I hope you have re-engaged Mr. Kincaid We ought to be retained at any cost I should like to see the poor negroes in these times properly looked after by all means...We will scarcely  have a fight here. Burnside has had his game blocked before he got well started. Robert 9E.Lee) is too quick for him and he will never be able to cross the River hear here....." Most of the rest personal. Stamp on cover is rare. Light blue #2 with good Richmond, VA Dec. 13, 1862 postmark.

MENDENHALL, Joseph W. Co. K, 45th NC Infy. DOW received at Gettysburg, July 1. "Hospital near Gettysburg, PA, July 14th 1863. "I have called one of my friends to my bedside this morning to write you my last letter My Dear Wife, I have to die and that soon. I would be more than glad to see my little family and relations, "but the Lord's will be done not mine" I know I shall not be permitted to do so and I am at ease I was wounded the first day of July in the left hip and I have suffered intense pane [sic]. ...You know I have lived a miserable life in this world, but thank God I have prayed and my prayer has been answered and I shall die in hope of Glory...My Dear Dear Wife think of me and take good care of my Son. Farewell to all."

TAYLOR, W.E. Treasury Department, CSA, Second Auditors Office, February 1, 1862. To Lieut .D. Longstreet, 11th Miss Vols. "You have been charged on the Books of this Office with the sum of Six Thousand Two hundred and Sixty-Seven 67/100 Dollars, being the amount receipted for by you in favour of Gen M. McAfee, Quarter Master General of said State, July 2, 1861. You are requester to render vouchers to this Office showing a proper expenditure of the money so receipted for."

Partially printed enlistment form for John Shuttles, of Blairsville, Union County, Georgia. Enlistment on 23 Feb. 1861. In large paragraph, "...I will observe and obey the orders of the Governor of the State of Georgia, and the orders of the officers appointed over me according to the Rules and Articles for the government of the Armies of Georgia, so long as I remain under the control of Georgia, and should I be transferred by said State to the Confederacy of States, which have seceded, or may secede from the government of the United states, and may adopt a confederated Government, I will thenceforth, to the end of the term... bear the allegiance, and render like services to said Confederacy..."

ANTHONY, B.M. Co. B, 11th VA Regt. Two letters, one to brother John, one to sister, Cally. In both he voices opposition to Genl. Lee's "negro bill." Feb. 20th, to Cally. "Only six men in company B voted against it.... The idea of having negroes fighting to enslave their offspring is more than ridiculous.... I see in today's paper that the 15 negro men have got to come to the army and I am truly sorry as I think all at home in greater danger than before on account of putting the negroes in the army. " Feb. 22nd, to John: "I see from the papers that you will have to go in the army and if I was you I would go to Mosby immediately.... I wish I had gone the day I started to Camp Lee as a great many did but I was foolish and consequently I have got to tuff it out here."