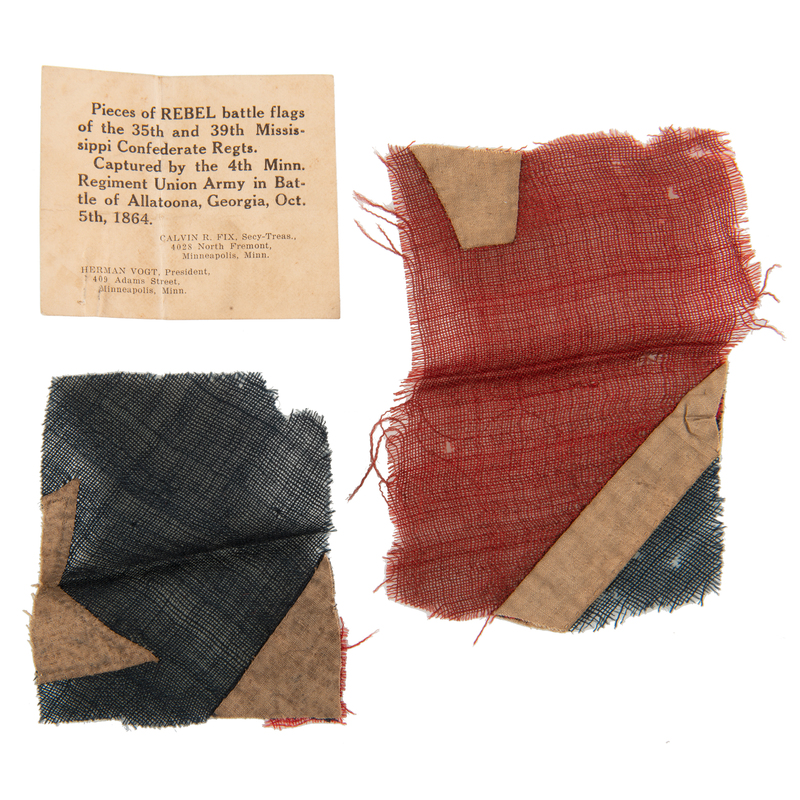 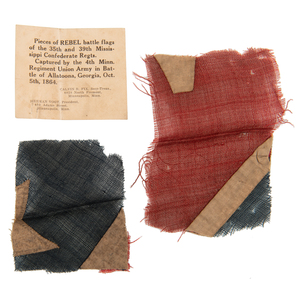 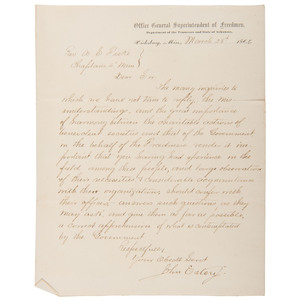 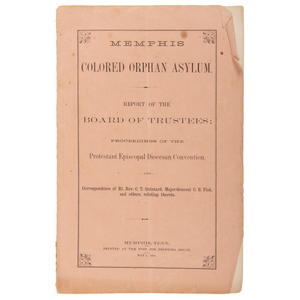 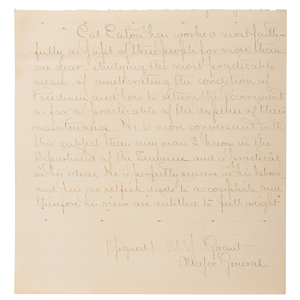 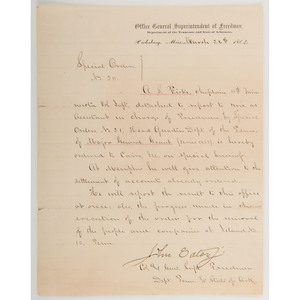 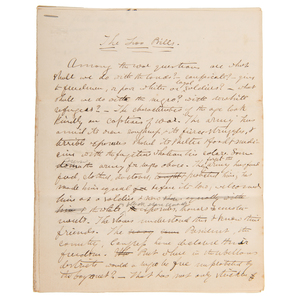 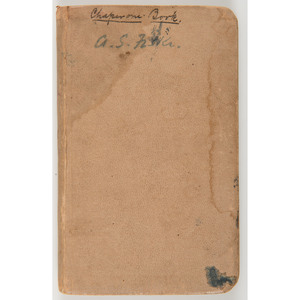 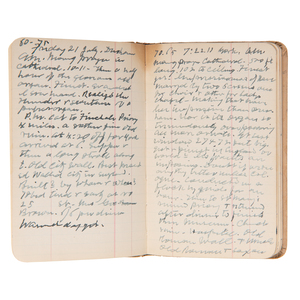 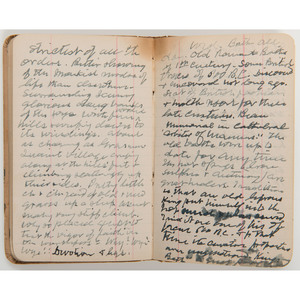 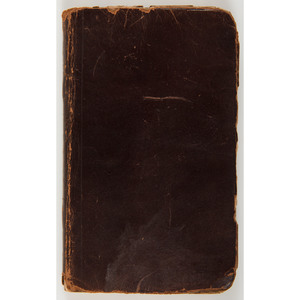 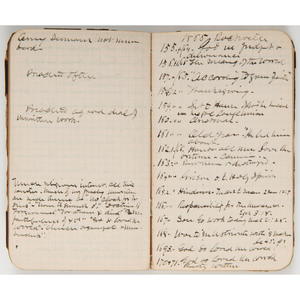 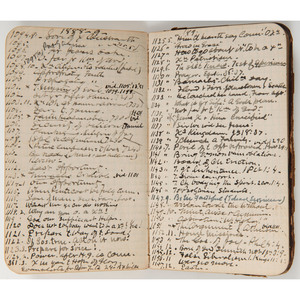 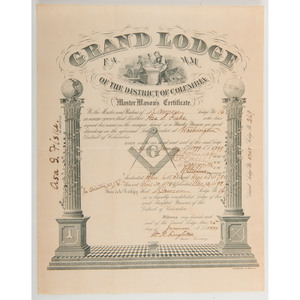 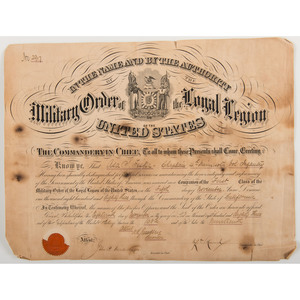 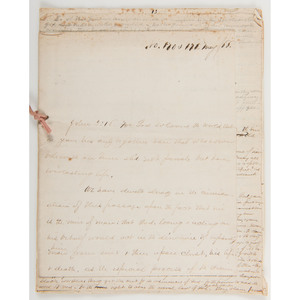 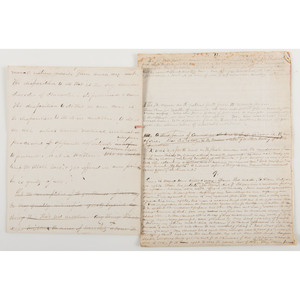 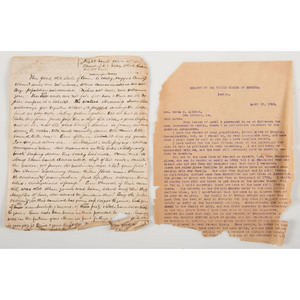 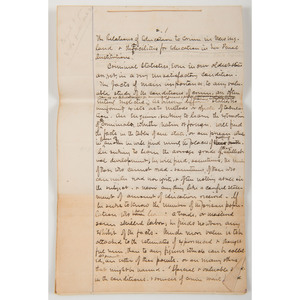 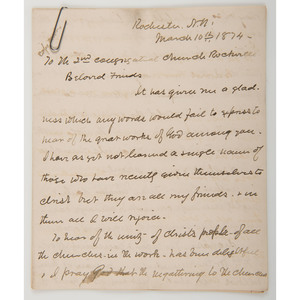 Large lot of items related to the ministerial and military career of Asa Severance Fiske (1833-1925). Highlights include Confederate flag remnants taken by the 4th Minnesota Infantry Regiment at the 1864 Battle of Allatoona, documents pertaining to Fiske's work with the Freedmen's Bureau, Fiske's handwritten sermons, and more.

Asa S. Fiske was a well-educated man and an experienced preacher by the time he moved to St. Paul, Minnesota, in 1859 to act as pastor at a new First Congregational Church. He enlisted as a chaplain on 1/30/1862 and was commissioned into Field & Staff for the MN 4th Infantry. Though initially stationed with his regiment, he was detached by Special Order of General Ulysses S. Grant to act as Assistant in Charge of Freedmen, reporting to Colonel John Eaton, Supt. of Freedmen Dept. of the Tennessee & State of Arkansas. In that capacity he served in Memphis with the Office of the Supt. of Colored Schools and advocated on behalf of the War Department in its efforts to officially establish the Freedmen's Bureau under the auspices of the War Department. He resigned his commission on 10/3/1864. Following the war he had a decades long career working in the field of education and continuing his ministry as a pastor in congregations across the country.

The entire collection descended directly through the family of Asa Severance Fiske to current consignor.  Included in this archive are the following:

Confederate flag remnants, one measuring 6.5 x 4 in. and the other 5 x 3.25 in. Note accompanying the fragments reads "Pieces of REBEL battle flags of the 35th and 39th Mississippi Confederate Regts. / Captured by the 4th Minn. Regiment Union Army in Battle of Allatoona, Georgia, Oct. 5th, 1864." The note, which dates ca turn-of-the-20th century, references "Calvin R. Fix, Secy-Treas." and "Herman Vogt, President" both of whom served in the MN 4th Regiment along with Asa S. Fiske and may have served as leaders in a Minnesota GAR veteran's organization.

Five letters related to Fiske's work with the Freedmen's Bureau. Two 1864 letters are written to Fiske by John Eaton (1829-1906), Col. and Genl. Supt. Freedmen Dept. Tenn and State of Ark. Written from Vicksburg on "Office General Superintendent of Freedmen" letterhead, Eaton directs Fiske to report to Cairo, IL, "on special business," to attend to the settlement of accounts of Memphis, and report on the removal of "the people and companies at Island No. 10, Tenn." In his second letter, Eaton discusses the role that Fiske is to have in establishing "harmony between the charitable actions of benevolent societies and that of the Government in the behalf of the Freedmen." Fiske's April 11, 1864, report from Memphis is also included as is a partial letter to Fiske discussing efforts by "a few wealthy aristocratic mulattoes in this city" to establish their own schools apart from the Colored Schools established by the Government. The final document relevant to the Freedmen's Bureau appears to be a draft letter of recommendation on behalf of Colonel John Eaton likely prepared for the intended signatory, Ulysses S. Grant.

"Memphis Colored Orphan Asylum. Report of the Board of Trustees; Proceedings of the Protestant Episcopal Diocesan Convention." Memphis, TN: May 1, 1866. 20pp, 5.5 x 9 in.

Envelope of newspaper clippings primarily related to the Civil War.

Dozens of sermons, with dates spanning 1866-1880s, which include references to locations in which he ministered after the war including the Second Congregational Church of Rockville, CT.

Grand Lodge of the District of Columbia, "Master Mason's Certificate,"  presented to Asa S. Fiske in 1899.

Military Order of the Loyal Legion of the United States, Certificate presented to Asa S. Fiske in 1883 for service to his country in the MN 4th.

AUCTIONEER'S NOTE: It has been called to our attention that the flag fragments are important pieces and that the only other known pieces of these flags that exist belong to the Minnesota Historical Society.

However, one of the two pieces, the larger of the two, is most likely from the flag of the 35th Mississippi Infantry. That flag and the 39th Mississippi's were taken at Allatoona Pass, GA in early October, 1864 by the 4th Minnesota Infantry. Rather than send them to the War Department, they sent them to St. Paul. In 1887, President Grover Cleveland sought to return the captured Confederate flags held by the War Department to the various Southern States and kicked over an anthill that he wished he had never kicked! The Grand Army of the Republic, the largest group of Union war veterans, went nuts (in particular the commander of the Ohio GAR) and slammed Cleveland and his Adjutant General (Richard C, Drum if memory serves), and while this would have only affected CS flags in Federal custody, some felt that those held by states would also have to be returned. About 1895 or so, at a reunion of the 4th Minnesota, the veterans of that unit took these two flags and tore them up giving out pieces to each of a group of members.

Thankfully, before this happened, both flags were painted by a local artist so that we know exactly what they looked like. Thanks to these paintings, it can be conclusively stated that the larger of the two fragments with what looks like part of a "V" or an "A" is definitely from the 35th Mississippi Infantry's flag. As you can see, this one is the only one that had battle honors and the bit on the fragment featured here fits either "Vicksburg" (if a "V") or "Iuka (if an "A"). This is very important as the other known fragments do not have this type of clue.

Our sincere thanks to Greg Biggs for this detailed information.

Provenance:Descended Directly in the Family of Asa Severance Fiske