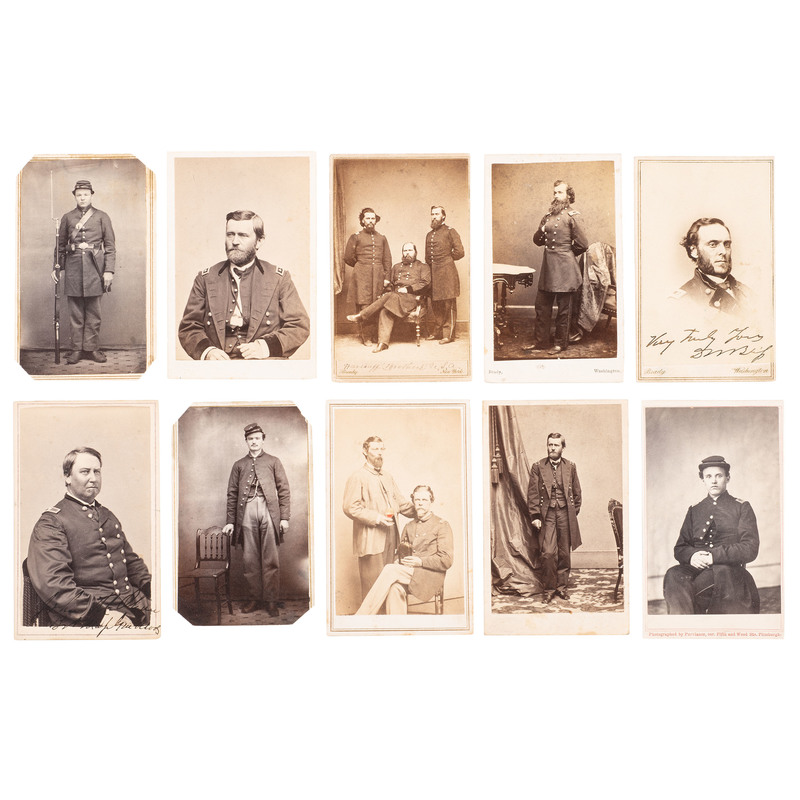 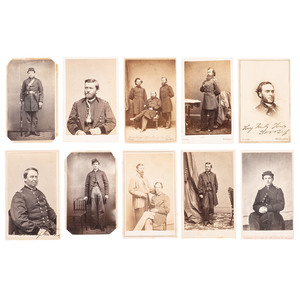 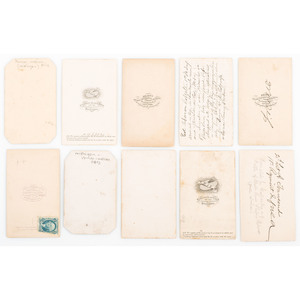 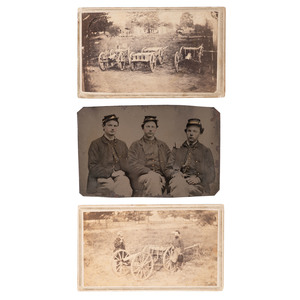 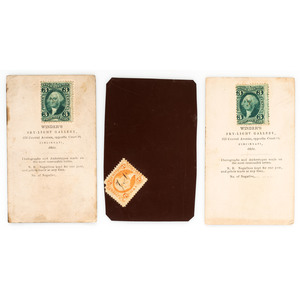 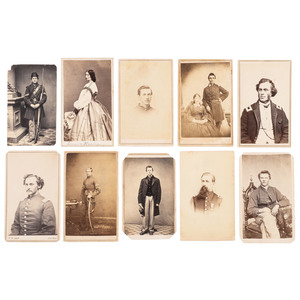 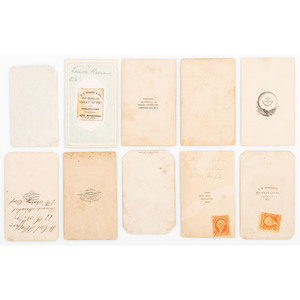 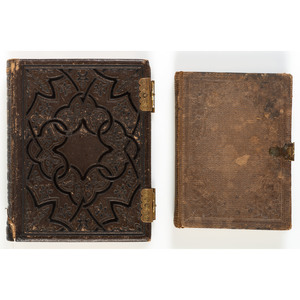 Leather album, 4.5 x 5.75 in., containing 25 CDVs of Union officers and enlisted soldiers, with the exception of one portrait of British stage actress Laura Keene, with D.C. Winans & Co., NY paper label on verso. A number of the images are credited to Mathew Brady.

Identified subjects include: 2 cartes of General U.S. Grant, each by Wenderoth, Taylor & Brown, Philadelphia, PA; Brady portrait showing General George L. Hartsuff and two staff members, including his brother, William Hartsuff, who would subsequently be brevetted brigadier general; autographed view of Brvt. Major General John M. Oliver, signed on print with rank, verso imprint of Goldin & Co., Washington, DC; autographed view of Brvt. Colonel Doctor Willard Bliss, signed below image and on verso, by Brady. A native of Grand Rapids, MI, Bliss enlisted as a surgeon and was commissioned into Field & Staff, 3rd MI Infantry 6/61, then commissioned into US Volunteers Medical Staff 9/61, raising in the ranks between 1861 and 1865 to colonel by brevet. Bliss was the attending surgeon for President Garfield after he was shot; Brady view of Colonel Horace S. Roberts, with detailed period inscription on verso recounting his Civil War service record and death at 2nd Bull Run. Roberts enlisted as a captain 4/61 and first served with Co. F, 1st MI Infantry, then was commissioned into Field & Staff, 1st MI, 10/61 as a lieutenant colonel. He was WIA, Gaines' Mill, VA, 6/27/62, and KIA 2nd Bull Run, 8/30/62. The verso inscription notes, "body never found, Rebs stripped all bodys, in retreat a sergeant of his Reg. recognized his body and took his watch and sleeve buttons home to the Cols wife..."; autographed view of Anson Heffron by C.K. Bill, NY, signed on verso, "Lt. Col Heffron, 79th NY / Provost Marshal, 9th Army Corps"; 2nd Lt. Alfred Townsend, by Purviance, Pittsburgh, PA, possibly signed on verso with rank. Townsend enlisted 5/61 and mustered into Co. H, 38th PA Infantry. He was severely wounded in the left leg at Bull Run, 8/30/62, which resulted in an amputation. Two months later, he was commissioned into the US Army 18th Infantry as a 2nd lieutenant, and rose in the ranks to captain by brevet by 9/63; and Corporal Albert J. Burgis armed with rifle, autographed on verso with rank. Burgis served with Co. F, 27th MI Infantry, raising in the ranks between 1862-1865 to 1st sergeant. Similar studio views of 4 other soldiers attributed as coming from Michigan are also enclosed. Accompanied by 8 cartes of unidentified officers and privates, including a studio view of a 1st lieutenant and friend sharing a drink, as well as a CDV-sized tintype showing three privates seated together.

The lot also features two outdoor views credited to Winder's Sky-Light Gallery, Cincinnati, OH. The first shows two officers standing beside a cannon in an open field, and the second shows three cannon together, with a split rail fence and homes visible in the distance.

Good to near excellent condition. Some with toning/spotting. Most mounts with corner/edge wear. Some with clipped corners.