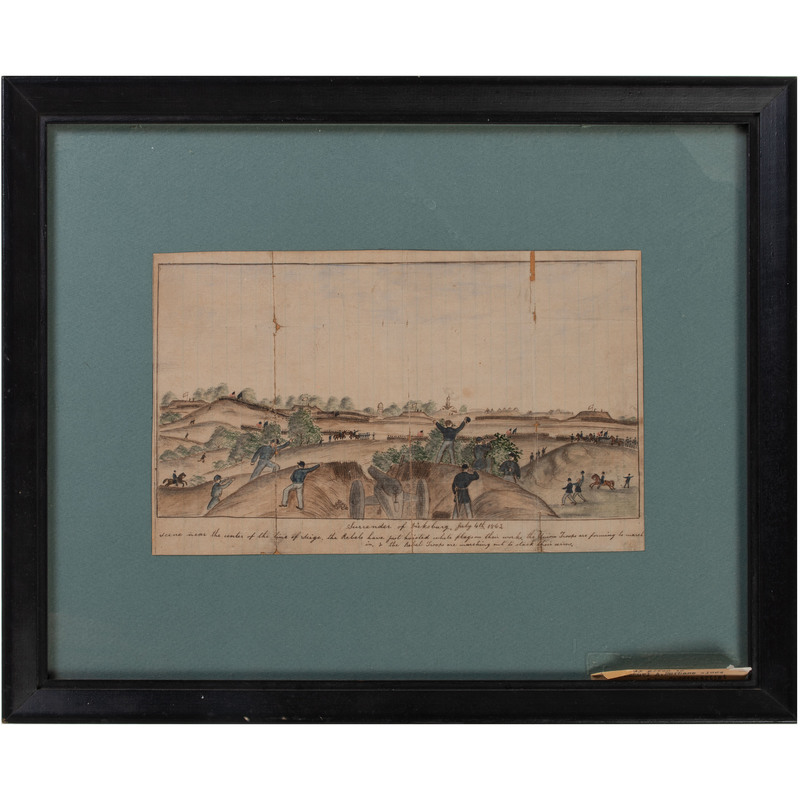 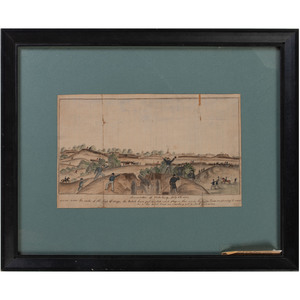 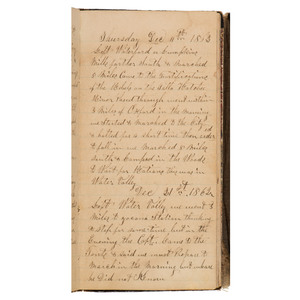 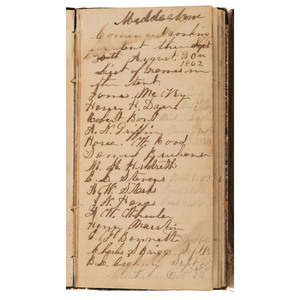 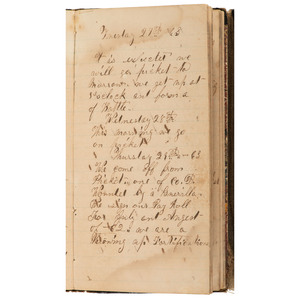 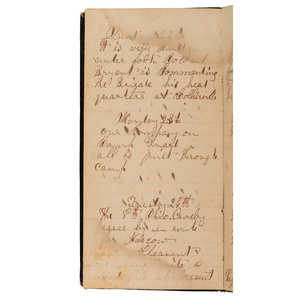 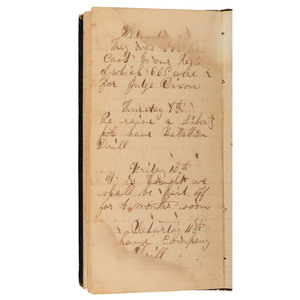 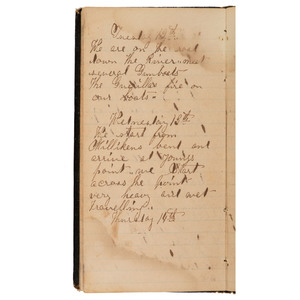 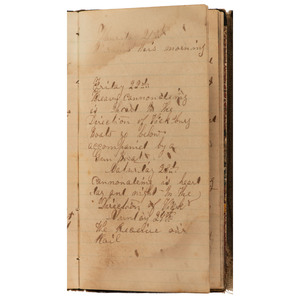 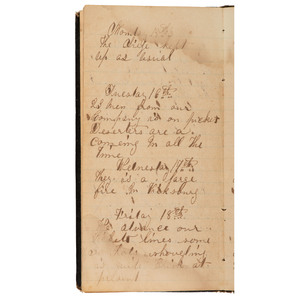 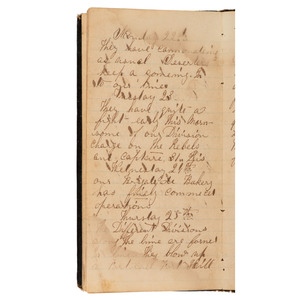 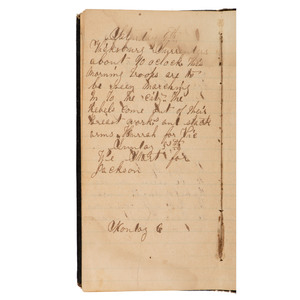 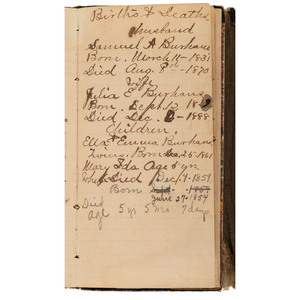 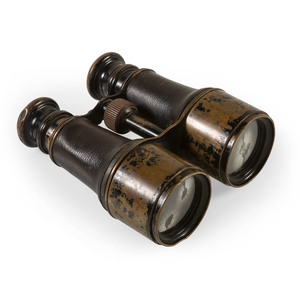 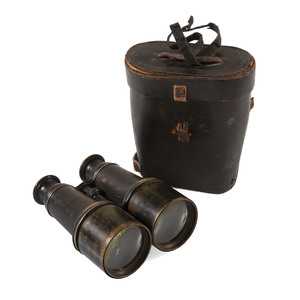 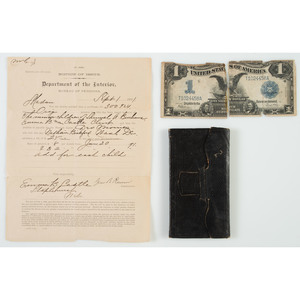 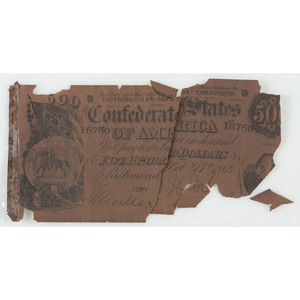 Samuel A. Burhaus (1831-1870, last name alternately spelled "Burhans" in some records), a resident of Delton, Wisconsin, enlisted as a private on August 14, 1862 and mustered into Company "E" of the 12th Wisconsin Volunteers that same day. The first page of his diary, dated four days later, consists of a list of names of his fellow company men including Henry H. Dyer, Robert Bond, and James McVey. His actual diary entries cover almost exactly a year of his life as an enlisted man, including many war experiences and personal tragedies.

One of the first major events mentioned in his diary is an election. On November 3, 1862, he writes, "Left Bollivar for the South we marched all day & camped at night & slept in the open air & in the morning as it was General Election the Poles was Opened and Part of the Men Voted then we had orders to Start so the Poles Closed & we Went to a Place Called La Grange on Wolef [sic] River…"

Burhaus continues describing details of daily life including snowfall and his regiment's discovery of rebel fortifications along the Tallahatchie River. He also mentions seeing the Memphis & Charleston Railroad, and hearing news of Logan's Division (Major General John A. Logan). In Burhaus's entries of early February, 1863, he writes of meeting the 12th Battery, and that regiment subsequently heading toward Memphis.

On February 11, 1863, tragedy strikes when Burhaus loses his thumb. He writes, strangely routinely, "We come off from picket. I shoot my thumb off accidentaly [sic]."

Burhaus continues, though wounded, to mention points of interest in each day. His entry of February 24th notes the passing by of the 8th Ohio Cavalry en route to Moscow, and Lieutenant Colonel Poole is mentioned in an entry four days later. Burhaus's company begins the month of March by having a dress parade, which coincides with a visit by a "Mrs. Harvey and Colonel Howe & his lady." And though there is no additional information about them, two iron clad steamers are spotted coming up the river on March 19th.

Things begin to heat up for the 12th Wisconsin and Burhaus's company in particular as the spring comes to a close. On April 18th, Burhaus and his regiment (along with at least two other infantry, one battery, and two cavalry regiments) march to Hernando, where more than ten prisoners are captured by cavalry.

The next day, Burhaus records action at Cold Water in his entry of April 19th: "We [indecipherable] our march to wards [sic] Cold Water. We arrive at Cold Water at 2 oclock Heavy Cannonadeing [sic] In our front they form a line of skirmishers 21st [?] on our left and the 33rd W.V. on our right. 8 of our companies are held in reserve but finely are orderd [sic] to the front and throw out skirmishers along the creek one of our company gets wounded C.F. we retire from the woods and start back."

Inching ever closer to Vicksburg, Burhaus almost daily mentions cannon fire heard from the direction of the city in late May. The 12th begins taking fire and coming into contact with deserters as the Siege of Vicksburg gets underway. In his entry of May 19th, Burhaus writes, "The Rebels undertake to shell us but does not amount to much. Lieut Bird of Co. G. wounded in the ancle [sic]." The next day, he records, "The cannonadeing [sic] was commenced this morning at 4 o'clock and kept up until 10 the whole length of the line they capture 2 forts on the right." After mentioning the capture of 31 more prisoners, the destruction of Fort Hill, the position held by General Herron's Division, and the death of one of his own company men, Burhaus is finally able to relay victorious news. His entry of July 3rd reads, "A flag of truce is to be seen on the Rebel’s earth works. The Rebs all come out of their Breast works and ours the same." The next day he continues, "Vicksburg Surrenders about 10 o clock. This morning troops are to be seen marching in to the city. The Rebels come out of their breastworks and stack arms. Hurrah for Vic.”

Burhaus's last entry is dated October 8, 1863. He writes about undergoing a grand review by Major Strong, formerly of the 12th Regiment, who noted that Company "E" had "the best looking guns."

Diary is accompanied by a number of items believed to have belonged to Samuel Burhaus, including a framed folk art drawing, 11 x 7 in. (sight), depicting the surrender of Vicksburg. Inscription below drawing reads, "Surrender of Vicksburg. July 4th. 1863. / Scene near the center of the line of seige [sic], the Rebels have just hoisted white flags on their works, the Union Troops are forming to march in & the Rebel Troops are marching out to stack their arms." This colorful folk art sketch, while unsigned, bears some resemblance to the style of Corporal John Gaddis, who served alongside Burhaus in Company "E" of the 12th Wisconsin Volunteers. Gaddis is known for his painted scenes from the war, fourteen of which make up a traveling exhibit curated by the Wisconsin Veterans Museum. It is possible that Gaddis gave this sketch to Burhaus as a gift before Gaddis was discharged for disability in November of 1864.

Also accompanying the diary are two pairs of field glasses, one of which is housed in leather case; a "housewife" sewing kit including a lock of hair and a note reading, "This kit made & presented to each soldier leaving Baraboo Wis. and was carried thru the Civil War by Samuel A Burhaus;" one fully separated United States One Dollar Silver Certificate (series of 1899 "Black Eagle," signed Speelman and White); one extremely worn reproduction Confederate States of America Five-Hundred Dollar note; and two documents:

Partially printed document from the Wisconsin State Treasurer's Office regarding a payment to Julia E. Burhaus from the Volunteer Aid Fund, 1p, 5 x 8 in., Madison, WI. January 22, 1864. Ink inscription on verso notes that Burhaus "lost his thumb at the battle of Vickburg [sic]," but never received any compensation from the U.S. government. Perhaps Burhaus told people he lost his thumb in battle rather than by accidentally shooting if off as his diary records.

Partially printed Notice of Issue regarding the pension owed to the children of Samuel A. Burhaus, 1p, 8.125 x 10.375 in., September 1, 1891. The notice specifies the rate of pension as eight dollars per month dated from June 20, 1871, and an additional two dollars per month for each child.

Various. Diary with wear and tear consistent with age and use in the field. Pages with water damage, some ink smudging/smearing, and wear to edges and corners. Drawing not examined outside of frame, but with visible discoloration and some separation/loss along creases, with wrinkles to paper.