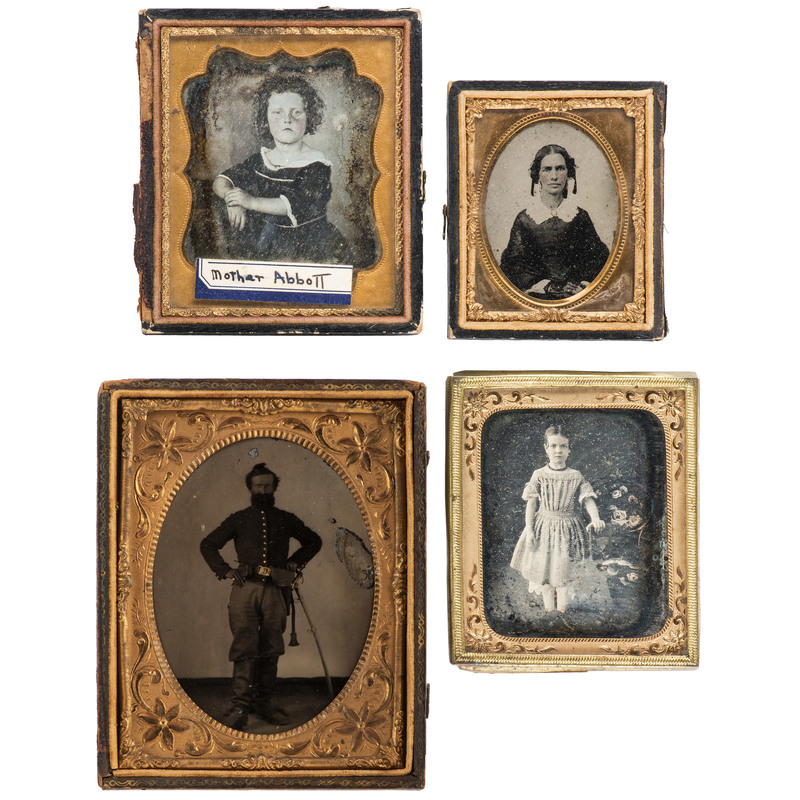 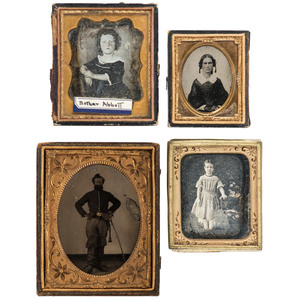 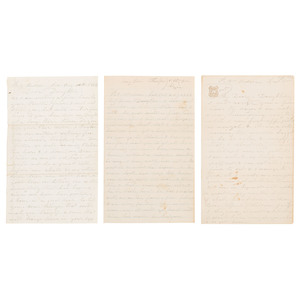 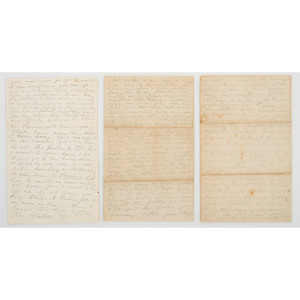 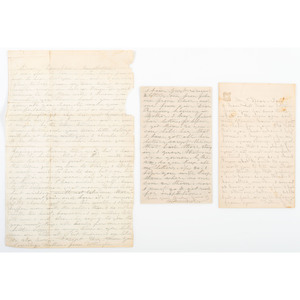 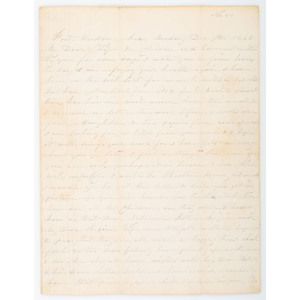 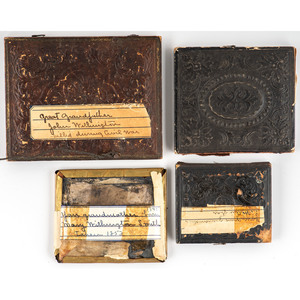 Lot of 18 letters and 4 photographs related to Corporal James Withington (ca 1815-1864) of Company B of the 3rd Massachusetts Cavalry. Enlisted on August 18, 1862, as a corporal, he was killed in action in Louisiana on May 15 or 16th, 1864, during General Bank’s ill-fated Red River Campaign. Most of the archive was penned at Port Hudson, Louisiana, during 1863.

This archive of letters tells a heartbreaking tale of a devoted father separated from his family due to the war. He enlisted in August 1862 with the 3rd Massachusetts Cavalry, destined to never return home. He writes often to his four children, even writing notes to his youngest children Olive (about age 10) and Lizzie (about age 3 or 4). Some of the letters are written to the family as a whole, a few to his son John (about 16) and most to his eldest daughter Mary Ellen (about 14 or 15). He writes with great fondness in a letter to John not long after his enlistment on November 21, 1862, “Tell Mary E to write me a good long letter...kiss my dear little Lizzie for me. Tell her if I should get hold of her I should hug her almost to death, I should like to see her. Tell Olive to be a good girl and I will bring her home a present from the South.” In an undated letter, he presciently writes, “if it should be my lot to be taken away from you, you will have the satisfaction of knowing that you have lost a loving Father, what ever his faults are in other respects.” Withington would tragically not survive the war, killed in action during the retreat of Bank’s disastrous Red River Campaign.

Withington writes frequently of foraging, commenting on the plentiful blackberries in a June 20, 1863, letter to Mary Ellen, “I wish you could see them. I never see so many in all my life” and the muscadines in his October 5, 1863 letter, “some of the men are out after them. They are nice & sweet. They say the ground is covered with them.” A later letter on December 9, 1863 details the relations between his foraging regiment and the Southern planters, “Our Regt is out after forage today...It makes the old secesh planters feel as savage as a meat axe to see us taking all the corn they have raised this summer & I don’t blame them for it is all they have to live on...After a while we know they hate us as bad as they can hate & if they could drown us in the river they would do it. We are getting corn now. When we see them plant it when we first came here & the most of them have taking the oath. The men lets them not to grumble for Uncle Sam will pay them for their corn but they say that money won’t pay them for they can’t buy more corn after theirs is gone. We tell them yes, after the Rebellion is over there will be plenty come down the River. The fact is they don’t want to starve nor they don’t want to see the South whipped. I don’t pity them one grain. Our folks don’t trouble them when we have feed come any other way but I am glad when we get out so we can take all they have, the sooner the better.”

Notably, Withington provides fascinating insight on the treatment of runaway slaves and other African Americans he encountered while camped in Louisiana. In a particularly moving letter on February 23, 1863, James writes to his children and recounts a story of an older African American woman who arrived in camp pursued by her former Mistress, “She came from Port Hudson. She brought her three daughters and their husbands & 6 or 8 grandchildren. They had to travel nights and hide in the woods at nights. She told me that her husband died since she came here. He was sick when they started and he took a bad cold laying out in the woods in the cold wet ground. She says that her Mistress has been here and stole 2 of the children. That was the first day she got here...She says that her Mistress has been here since she found out where she lives and wants to get more of the Children. She asked the old woman if she did not want to go back home. She told her no. Then she tried to frighten her. She told her the Yankeys would have to leave Baton Rouge before long and then she would have to go back and then she would make her smart for running away. Then she tried to make her give up 2 more of her children.” Wilkinson notes that as tragic as this story is, it is not uncommon, ”I think I have to you quite a story about one family of Darkes...That my Dear Children is only one case in a hundred.” He also candidly describes that she was treated poorly by the Union soldiers in his own camp, “The poor Old Slave is hooted at by a great menny that is in our army. Those that should be their friends. It is about all you can hear here. Get out you black ape.”

He relates another affecting scene in his letter of August 28, 1863, to Mary Ellen, “We have all moved in side of the entrenchments in the Fort, we left some 4 or 5 hundred Negroes out since & as soon as the Rebels found out we have left, they came down on the Poor Darkes and shot quite a number of them besides. Take on some of them it was a shame to leave them out to be taken by the Rebs.” Again, he discloses the hostile attitude taken by many of his compatriots, though he is sympathetic, "I expect some of them will fare rather hard there is so many of them coming in I don’t know what they will do with all of them. Some of our men abuse them as much as the Rebs do. But I will always use them well, if it is in my power."

The archive also contains a quarter plate tintype of “Great grandfather John Withington, killed during Civil War.” Withington stands in uniform, wearing a belt that has several pouches, with a sabre hanging at his side. His uniform buttons, belt buckles, ring, and sword hilt are tinted gold. Housed in half pressed paper case with brass mat and frame, lacking glass. Additional family photos include a sixth plate daguerreotype of a young girl identified as “Your grandmother born 1847 Mary Withington Smith, Taken 1853,” which is probably Mary Ellen Withington (b. ca 1847); ninth plate ambrotype of a woman identified as “Your great-grandmother Withington.” This is probably Elizabeth H. Withington; and sixth plate daguerreotype of a young girl, possibly one of Withington's daughters, identified as ”Mother Abbot.”

Letters in various condition. Most with toning, especially to creases, some brown spotting, some with splitting at creases. Three letters undated, a fourth undated appears to be a partial letter or belonging to another correspondence with no heading.