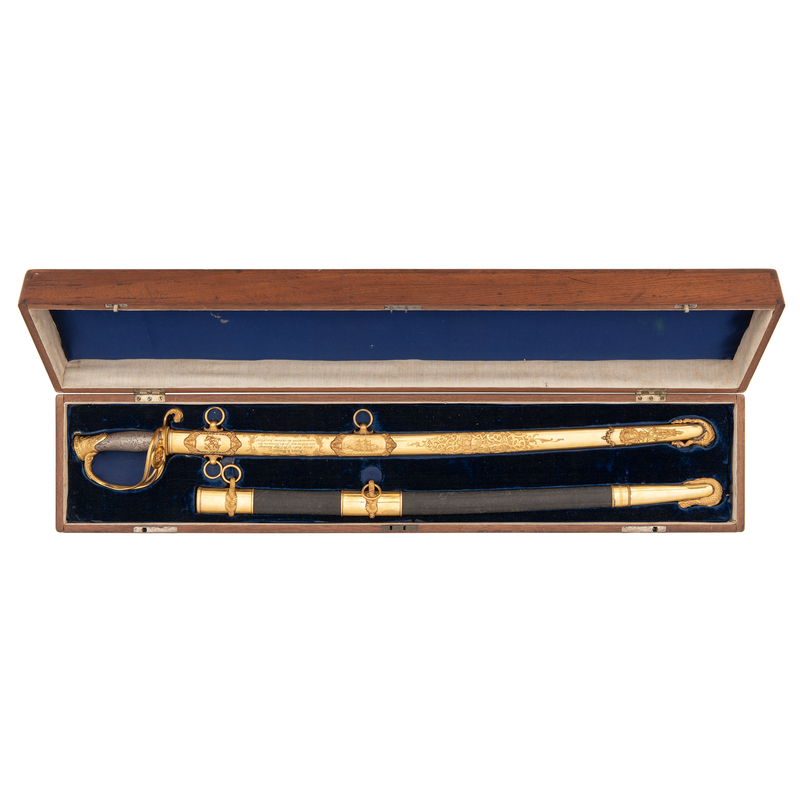 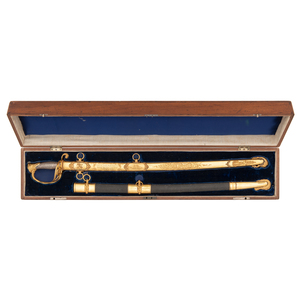 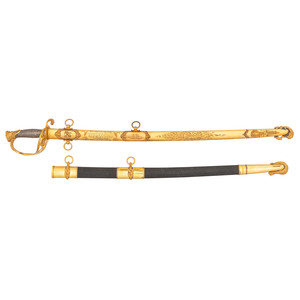 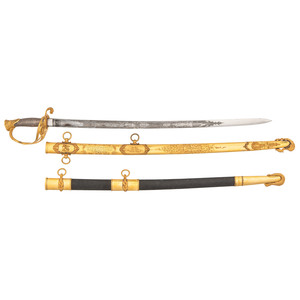 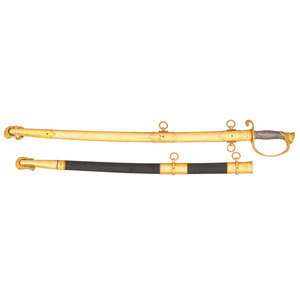 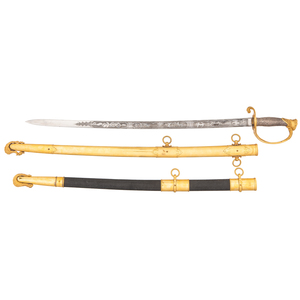 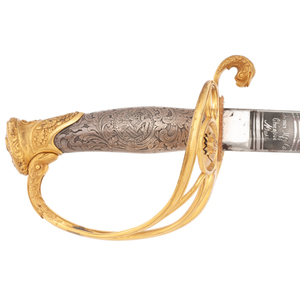 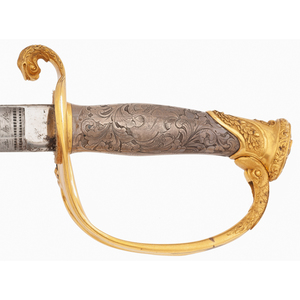 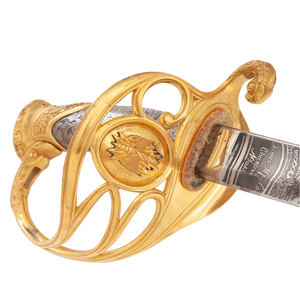 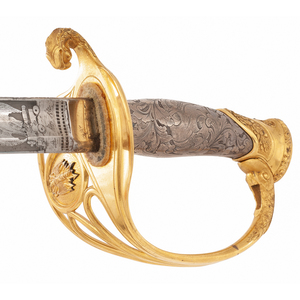 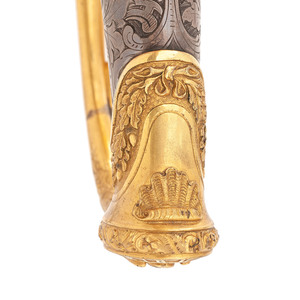 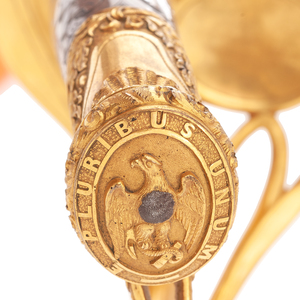 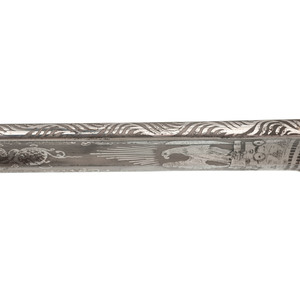 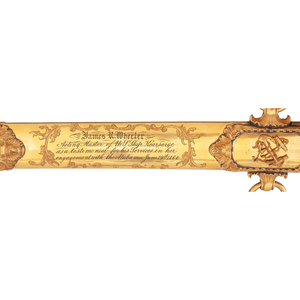 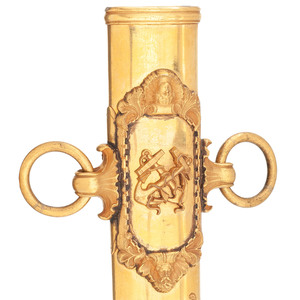 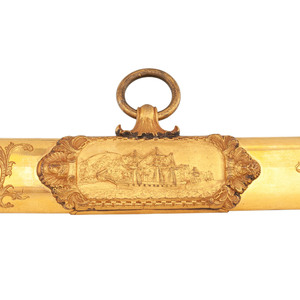 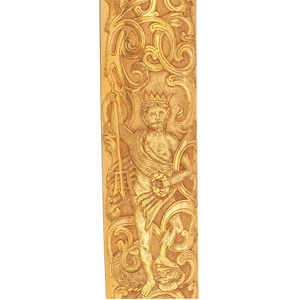 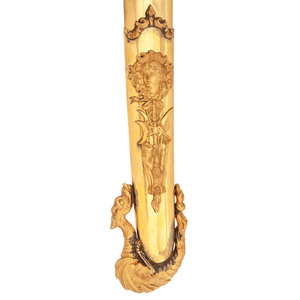 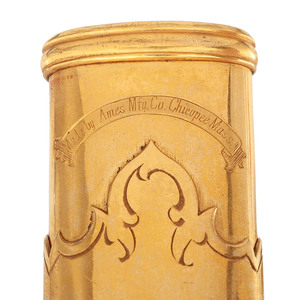 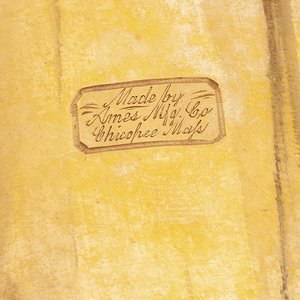 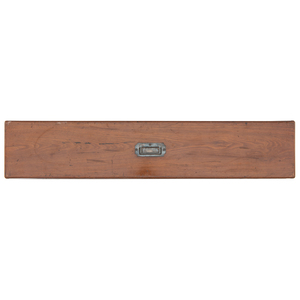 28.75" slightly curved, single-edged blade with 19.5" stopped central fuller. 5.5" gilt brass hilt with sterling grip and three-branch guard that terminates in a sea serpent at the pommel and another sea serpent as the quillon. Frosted etched blade marked Ames Mfg. Co / Chicopee / Mass above the obverse ricasso and with decorative panels running about there-fourths of the blade's length. The obverse images include panoplies of arms, flowing foliate and geometric themes and include a central image of an anchor surmounted by an American shield. The images on the reverse of the blade include a canon mounted on a naval carriage, and American Eagle, a fouled anchor and a central image containing the letters USN in a banner, along with the usual foliate scrolls. The sterling grip is engraved with tight, flowing feathery scrolls featuring a nautically themed panoply of arms as the central image on the obverse. Guard with an oval depicting a panoply of arms and the pommel cap with an eagle surmounting a fouled anchor, surrounded by the motto E PLURIBUS UNUM. Pommel cap is further decorated with flowing feathers and a shell motif in addition to the usual acanthus leaf motif. Sword is accompanied by a pair of scabbards, including a highly embellished gilt brass scabbard with highly detailed and stylized mounts, three suspension rings and a sea serpent drag. The obverse of the metal scabbard is engraved with the following presentation: James R. Wheeler / Acting Master of the US Ship Kearsarge / as a testimonial for his Services in her engagement with the Alabama June 19, 1864. Scabbard with relief engraved image of Poseidon within flowing scrolls and nautically theme mounts. Secondary scabbard of shagreen covered wood with gilt brass naval motif mounts with knotted ropes and a sea serpent drag. Sword and both scabbards are contained in a varnished wood case with silver washed brass fittings. The case has a form fitted interior with blue velvet and satin lining, with additional cream colored satin lining. This sword is published in a number of references including Colonel Rankin's Small Arms of the Sea Service. A truly spectacular Civil War naval presentation sword from one of the most storied Civil War naval battles, likely second only to the battle between the Monitor and the CSS Virginia (Merrimack) in terms of legend and lore.

On July 19, 1864 Acting Master James R. Wheeler was one of nineteen naval officers aboard the USS Kearsarge during the epic sea battle off Cherbourg with the storied Confederate commerce raider CSS Alabama. As spectators watched from the shoreline the visual drama of the unprecedented engagement between two steam warships played out lasting a little over an hour. The adversaries maneuvered on opposite courses in spiraling circles, attempting to cross the others' bow and deliver a full broadside. As the range closed, Alabama fired first without effect. Not unexpectedly the well drilled crew of the Kearsarge soon demonstrated superior gunnery skills and methodically scored at least six hits that holed the Alabama below the waterline. With the Alabama sinking Captain Semmes struck the colors and send his only surviving boat over to Kearsarge for assistance. Details of the broader fight are many, while Acting Master Wheeler in his official report of the battle - his only known eyewitness account - dated June 22, 1864 gave a rather brevet perspective:

In obedience to your order I respectfully report that during the recent engagement with the Alabama the men of the first division, comprising the 11-inch forward pivot gun and rifle upon forecastle, without a single exception, displayed coolness and fortitude to a degree not anticipated under the excitement of receiving an enemy's fire. Indeed, I can not sufficiently express my commendation of their performance of duty. While I render to every man a praise so justly merited, I would make special mention of James Haley, captain, John F. Bickford, first leader Charles A. Read, first sponger, Edward Wilt, second sponger, of pivot gun, for their deliberation and coolness during the discharge of their respective duties. The marine guard, stationed at the rifle gun openly exposed to the fire of the Alabama, showed great coolness and efficiency in the discharge of their respective duties.

A Boston native, Captain James R. Wheeler of the "Merchant Service" is said to have volunteered his services even before the Confederacy fired on Fort Sumter. An experienced civilian mariner who managed to navigate navy bureaucracy, he was duly appointed Acting Master on October 29, 1861 and was immediately ordered to report to the Commandant of the Boston Navy Yard for gunnery instruction. On December 20, 1861, Wheeler was ordered to Portsmouth for duty aboard the steam frigate USS Kearsarge as Acting Master. His first war patrol under Captain Pickering was to the Mediterranean in search of the marauding "Rebel Steamer Sumpter" [sic]. Thereafter, Wheeler was attached to Kearsarge from the time she left Portsmouth until she returned to Boston in November 1864 with the exception of "a short time he was ordered by Captain Winslow on secret service" previous to the engagement with Alabama. Presumably detached to Cherbourg (or possibly an English port), said service seemed to involve collecting local intelligence on "the movements of the rebel vessels Alabama, Georgetown, and Rappahannock," erroneously believed to be in the vicinity of the Kearsarge. We know that Acting Master Wheeling had returned to his ship by June 19 as his signature appears in the ship's log as "Officer of the Day." In the wake of the signal victory, Captain Winslow is his subsequent dispatches to the Navy Department mentioned, among others, Acting Master Wheeler for "meritorious conduct and services" laying the groundwork for future independent command. This exquisite presentation sword "as a testimonial" was forthcoming. Additionally, on December 20, 1864 all of the officers and men of the Kearsarge received the Thanks of Congress in a formal resolution praising their "skill and gallantry....in the brilliant action against the piratical craft Alabama."

Kearsarge finally returned to Boston in November 1864 and after several months of shore leave (Wheeler had married in 1854), James Wheeler was promoted to Acting Volunteer Lieutenant on February 7, 1865. He was given command of the fast steamer USS Preston, formerly a British built blockade runner named Annie that had been captured off North Carolina and subsequently acquired by the navy. The vessel departed New York in mid February bound for new Orleans where she arrived on March 9, 1865. Preston was assigned to duty as part of the West Gulf Blockading Squadron. On March 21 Preston sailed for Mobile with dispatches for Admiral Thatcher and then joined the 3rd Division of the West Gulf Blockading Squadron operating off the coast of Texas. Preston put into Galveston, the only major port still in Confederate hands, following the surrender and remained on station during the month of July until ordered to Philadelphia where she was decommissioned on August 8 and sold out of service. Acting Lieutenant Wheeler remained in limbo "awaiting orders" until December 18, 1865 when he was assigned to the USS Algonquin, a paddle steamer gunboat that rarely left New York Harbor due to poor engines. Wheeler was detached from the Algonquin on March 10, 1866 and went aboard the steamer Augusta on March 23 preparing to undertake a celebrated cruise accompanying the USS Miantonomoh, a revolutionary twin screwed double turret seagoing monitor conveying Assistant Secretary of the Navy Gustavus V. Fox to Imperial Russia on a goodwill mission bearing a Congressional Resolution of congratulations and thanks to Tsar Alexander II. A later report mentions that "Lieutenant Wheeler accompanied Secretary fox's party in receiving the hospitalities of Russia." The lengthy cruise left New York on May 5, 1866 and was a political gambit intended to show the flag and American naval technology. The two ships would be away for over a year and would visit nearly every port in Europe and the Mediterranean before returning home and anchoring in Philadelphia on July 22, 1867. Lieutenant Wheeler did not complete the extended tour. While visiting Lisbon in December 1866 Admiral Goldsborough commanding the expedition ordered a medical board for officers and crew. Along with others Lieutenant Wheeler "was condemned by the Medical Survey and ordered home" on December 5, 1866. Lieutenant Wheeler returned to Philadelphia in January 1867 and was honorably discharged from the navy on February 11, 1867.

Shortly after leaving the navy Wheeler applied for an invalid pension which was granted at the rate of ten dollars per month to date from April 1869 payable at Boston. Wheeler specifically cited in his application "a hernia of a permanent nature through injuries received while in the line of duty serving in the USS Kearsarge against the Alabama."The matter of Wheeler's pension would become manifest as part of his legacy. After a spell of unemployment Wheeler was appointed an Inspector in the Boston Customs House, afterwards being promoted to Storekeeper. In 1869 he applied for a consulship probably on the basis of his limited diplomatic experience in Russia, and in November was appointed by President Grant as Consul to Kingston, Jamaica, West Indies. Wheeler's notoriety stemming from his naval service probably having some bearing on the appointment. Wheeler arrived in Kingston on January 6, 1870 with his wife and two children to assume his new duties as consular officer. Shortly after taking the post Wheeler became stricken by the heat, his "health already poor by reason of the injuries received in the line of duty." After a short illness he died in Kingston on April 8, 1870 at which time his meager pension and annual government salary of $2,000 abruptly ceased. James R. Wheeler was buried in Kingston, the funeral and all other expenses paid from his estate. Tragically, Wheeler's wife, Sarah, and the two children were left nearly destitute, the administration of the estate in both Kingston and Boston "swallowed up everything" forcing them "to find their own means for returning to Boston." It is noted in later official pension correspondence with Sarah Wheeler that "the prize money received on account of the Alabama amounting to $3,754 dollars" was also "swallowed up in administering the estate." Periodically throughout the second half of the 19th century, the widow Sarah, then living in Roxbury, Massachusetts, petitioned the government with claims for a widow's pension. Sadly, Sarah was never able to provide the required documentation - her husband's death certificate was never located and her own first and middle names had been inverted resulting in a decade of mistaken identity - causing her multiple claims to be denied or disallowed. Sarah Wheeler died in 1890 without the pension. A determined son sought to redress the perceived injustice for as late as March 1920 correspondence exists between a William R. Wheeler and the pension office over back claims, by now filed as "abandoned."

Very fine. Blade retains most of the frosty etching and bright blade polish with some minor wear and loss, as well as some light scattered surface oxidation, most notably ion the obverse above the Ames mark. Hilt fine with much gilt remaining. Scabbards both fine. Wood case with some wears scattered scuffs and mars and a moderate chip out of the lower left corner. Interior with wear, some tearing of the lining and some fabric loss.