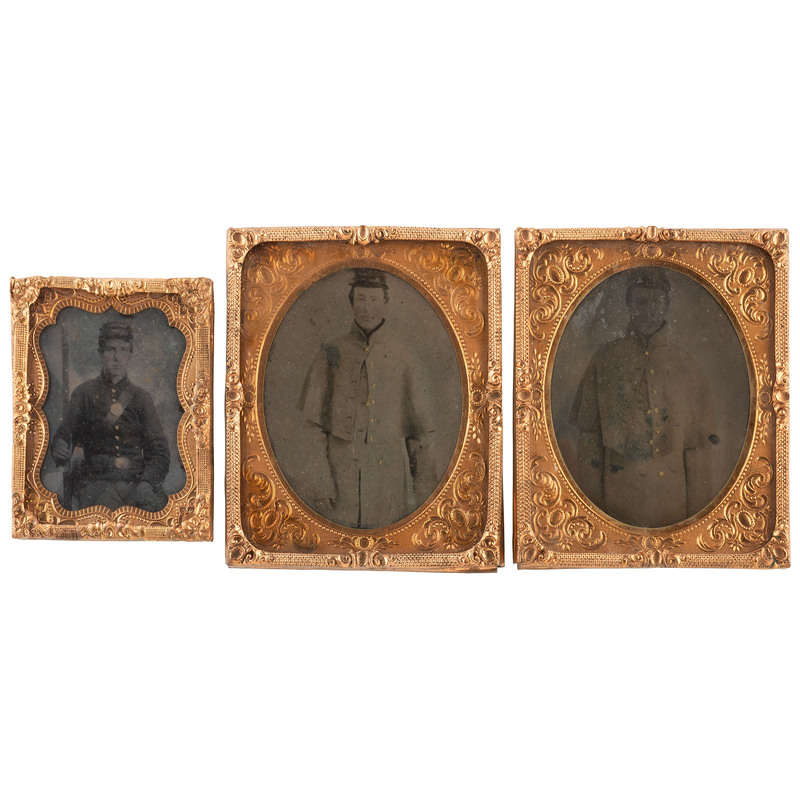 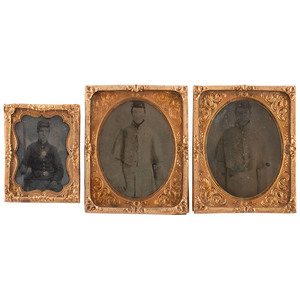 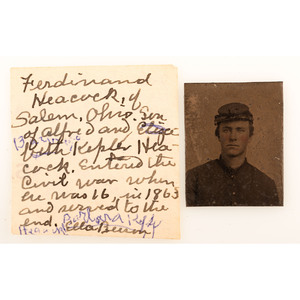 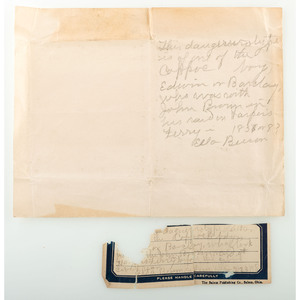 Sixth plate tintype depicting an infantry private in winter overcoat, the buttons tinted gold. (Contrast weak, surface spotting, surface wear.) Housed in half pressed paper case (surface wear, some loss near corners and edges). Accompanied by later, partial paper label with notation, "This is a daguerrotype [sic] of either one of the Coppock boys, [Edwin] or Barclay, who took [part in] the John Brown raid at Harper's Ferry before the Civil War [signed] Ella Beeson, Salem, Ohio, 7/23/48." -- Sixth plate tintype of an infantry private in winter overcoat, the buttons tinted gold. (Contrast weak, light scattered spotting, some surface wear.) Housed in full thermoplastic Union case with scroll design (soiling, edge and corner wear including chipping). Accompanied by later penciled note, "This daugerrotype [sic] is of one of the Coppoc boy, Edwin or Barclay, who was with John Brown in his raid in Harper's Ferry in 1857 or 8? [signed] Ella Beeson." -- Ninth plate tintype of an unknown infantry private wearing a regulation 9-button frock coat, holding a musket. (Contrast weak, some surface wear and discoloration, surface spotting.) Housed in full pressed paper case (separated at hinge, surface wear/loss). This may be the same subject depicted in the second tintype described.

[With:] 1 x 1 3/8 in. tintype of young soldier wearing kepi (image a bit dark, light surface wear). With remnants of paper label on verso with partial text, "[pho]tograph / Army of [Cu]mberlan[d]." Accompanied by later note identifying the subject as John Ferdinand Heacock of Salem, Ohio. HDS lists a John F. Heacock who enlisted at the age of 18 as a private and mustered into Co. B, Ohio 104th Infantry 8/30/1862. He was mustered out on 6/17/1865 at Greensboro, NC.

Consignor acquired the group of images from the Estate of Margaret Beeson of Washington, PA, approx. 20 years ago. Accompanying paperwork provides genealogical records indicating that Margaret Beeson was a descendant of Edwin and Barclay Coppock, although the identifications included with the images cannot be confirmed.

Born of Quaker parentage near Salem, Ohio, brothers Edwin Coppock (1835-1859) and Barclay Coppock (1839-1861) moved to Springdale, Iowa, where they met and became followers of John Brown. The Coppocks participated in Brown's raid on Harpers Ferry. Edwin was tried and convicted of treason, murder, and fomenting a slave insurrection for his participation in the raid and was hanged in Charles Town, Virginia [West Virginia after 1863] on 16 December 1859. Barclay escaped, returning to Springdale, and later joined the Union Army, serving as a recruiting officer. He was killed in action when Confederate sabotage derailed his train over the Platte River in an incident called the "Platte Bridge Railroad Tragedy."