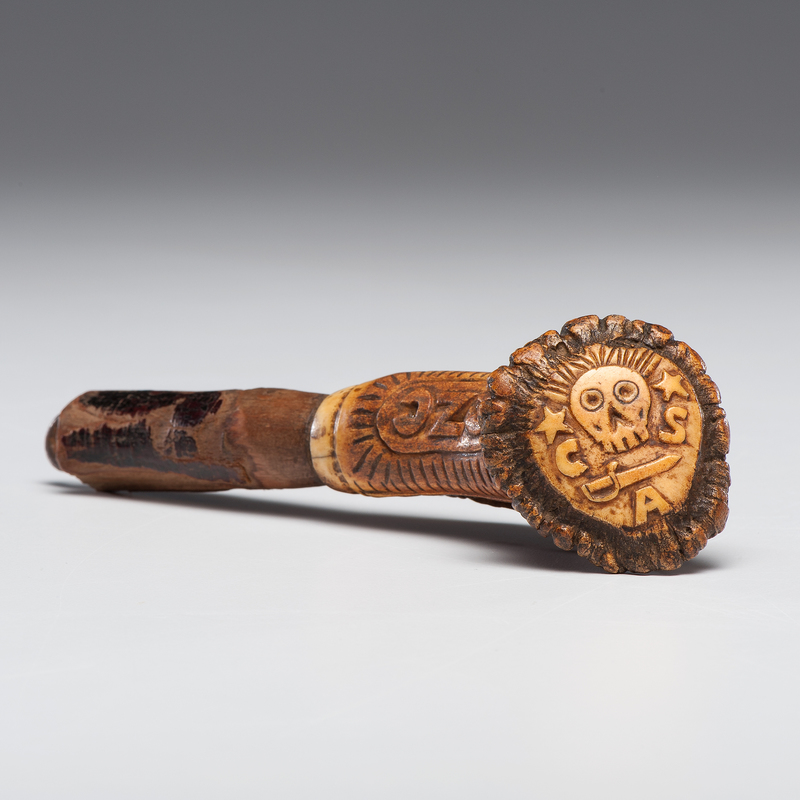 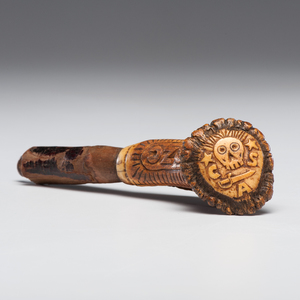 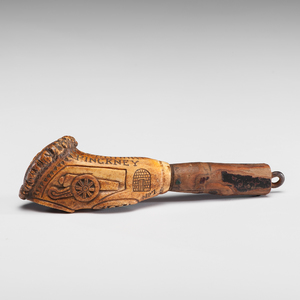 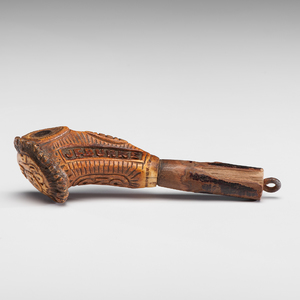 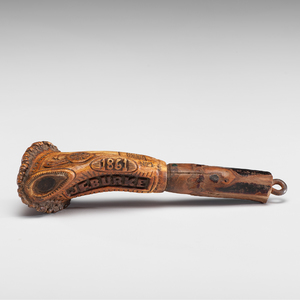 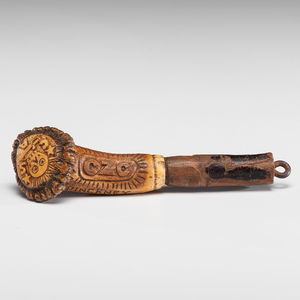 Exceptional, Confederate carved cane handle comprised of two parts, including a carved antler handle, height approx. 3.75 in., attached to a partial wooden shaft, height approx. 2.75 in. The top of the handle features a relief carved skull suspended over a Confederate D-Guard Bowie knife, flanked by two stars and CSA. The handle is identified to J.F. Burke in high relief along the left side (relative to the top); followed by a panel surrounded by a sun-burst like border, with CZC [Charleston Zouave Cadets] carved at its center; followed by Pinckney inscribed above a cannon and arched block structure, with No. 7 carved below the lower right edge of the structure; followed by oval panel with 1861 carved at its center. Overall height, approx. 7 in.; handle diameter 1.75 in.

Joseph F. Burke was born in 1845 in Charleston, SC. By the age of 16, Burke was a member (cadet) of the Charleston Zouave Corps at the Military Academy of South Carolina ("The Citadel"). As a member of the cadets, Burke was involved in firing the REAL first shots of the war. In late January 1861, The Star of the West, a civilian steamer hired by the Union, was attempting to re-supply Major Robert Anderson at Ft. Sumter (with food, ammunition and 250 soldiers). The cadets fired two 24-pound cannon across the bow of the Star. She was then hit as many as five times until finally turning around, failing her re-supply mission. History credits Beauregard's shelling of Ft. Sumter as signaling the start of the war, but had the fort been re-supplied, it might have resisted the attack - at least for a bit longer until more aid arrived.

Three days after the attack on Ft. Sumter the Zouave Cadets were garrisoned at Castle Pinckney, part of the ring of defenses of Charleston Harbor that included Forts Sumter and Moultrie. The fort was named for Charles (CC) Pinckney, Revolutionary War veteran and South Carolina Statesman, along with his son, Thomas. In September Pinckney received POWs from the Battle of Manassas, but was too small to serve as a camp for long. The prisoners were removed just six weeks later. We suspect this is the "Pinckney" reference on the cane handle, and likely the block structure on the cane is one of the fort's casemates, since it is opposite a cannon. Many of the lower casemates were turned into cells in which prisoners were held at Castle Pinckney.

Burke's actions during the war are a bit uncertain, but after the war, he moved to Atlanta, GA in search of business opportunities. He found not only business, but a wife, in Atlanta, marrying Louise Cotting, daughter of the Georgia Secretary of State. By the 1880s he was the chief partner in a company selling spices, tea, flavorings, baking powder, etc.

He also joined the Gate City Guard, a militia unit that had its origins well before the Civil War.  He became its commander by 1877. He undertook missions of peace, trying to heal the rift between North and South. In 1879 the Guard went to New York City, what he called a "peaceful invasion" of the North, and gave an eloquent speech in which he emphasized "We know that the war and its evil consequences to us are things of the past and should be forgotten. The past is buried, and now we must look to the future." (see http://oldguard-atlanta.org/history/the-story)

When Alexander Stephens, Governor of Georgia and former Vice President of the Confederacy, died suddenly in 1883, Burke was on his staff and took on the arrangement of the funeral. Stephens' remains were kept in the Burke family vault until a monument could be erected in Stephens' hometown of Crawfordville. Later Burke also had a monument erected to his 1879 "Peace Mission."

In 1893 during a dispute over control of the Guard and its resources, the older members, feeling they were too old to assume military duties should trouble arise, formed the "Old Guard Battalion" of the Gate City Guard. They continued their peace mission, and Burke became their commander. After serving the Guard for five decades, Joseph Burke died in his adopted city April 24, 1927 at the age of 81.

Wear consistent with age, fine patina. Appears shaft may have been painted black ("ebonized," a popular treatment in the 19th century), because it shows remnants of black paint or varnish. 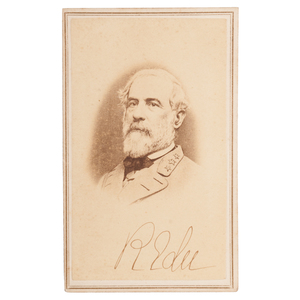 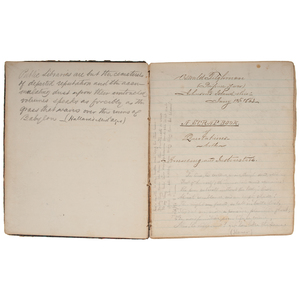