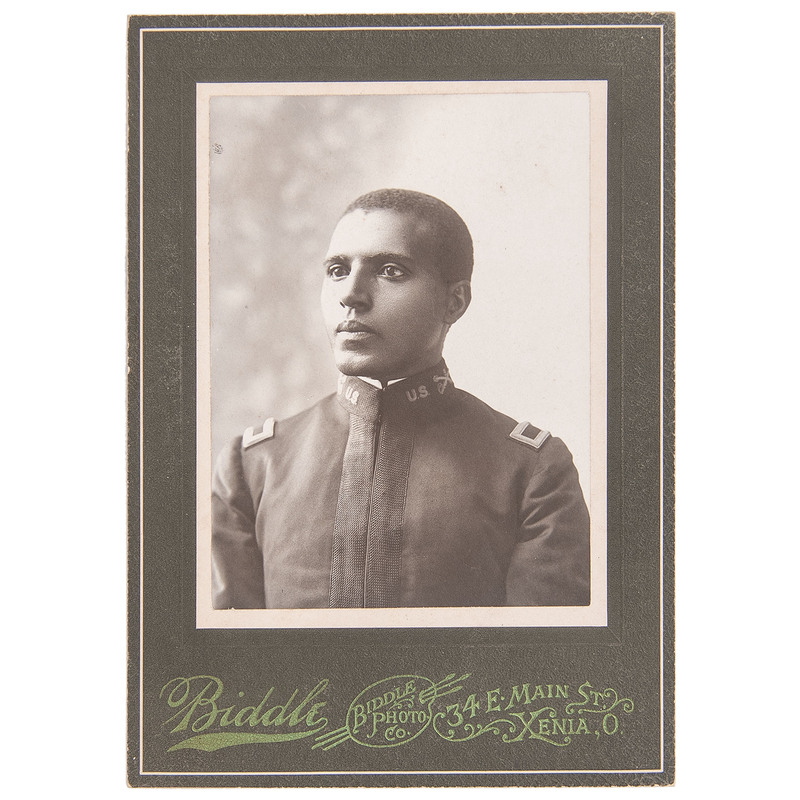 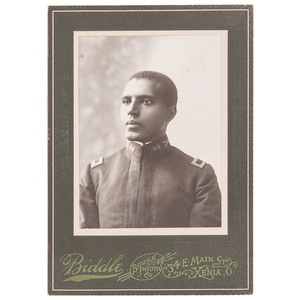 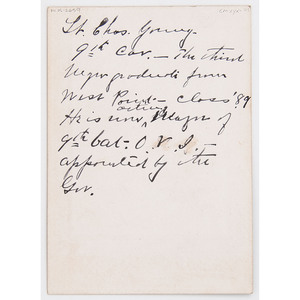 Cabinet card portrait of Charles Young. Biddle: Xenia, Ohio, n.d, circa 1894. 34 E. Main St. imprint on recto. Inscription on verso: "Lt. Chas. Young / 9th Cav. - the third / Negro graduate from / West Point.- Class '90. He is now active Major of 9th Bat. O.V.I. - appointed by the Gov." Though unsigned, the hand is the same as that of scholar William Sanders Scarborough (1852-1926). The same portrait of Young was used in Scarborough's 1899 publication Famous Black Regiment, The 10th United States Cavalry, sold as Lot 44 in Part I of The Road West.

Charles Young was the third African American graduate from West Point and he sat for this photograph wearing his 9th Cavalry uniform. The Xenia photographer's imprint suggests that the image was taken when Lieutenant Young was assigned to Wilberforce College in 1894, where he met W.E.B. Du Bois and William Sanders Scarborough. The inscription is almost certainly by Scarborough, who became the first African American professional Classics scholar when he became a professor at Wilberforce University. He led a distinguished career and though his primary focus was Classics, he held an interest in and wrote about West Point's African American graduates and the Buffalo Soldiers [see Lots 43-44 in Part I of The Road West].

In 1889, Charles Young graduated from the United States Military Academy, despite heavy racial abuse from his classmates and teachers. He was only the third African American to do so, after Henry Ossian Flipper and John Hanks Alexander. There would not be another Black graduate until Benjamin O. Davis, Jr. in 1936. Young was commissioned as a second lieutenant and served for 28 years, primarily with the Buffalo Soldiers in both the 9th and 10th Cavalry Regiments.

During the Spanish-American War, he was promoted to the temporary rank of major on May 14, 1898, commanding the 9th Ohio Infantry Regiment, a segregated unit with four companies. Although the unit did not ship overseas before the end of the conflict, his command was very important as it was the first time that an African American commanded a sizable unit of the United States Army. The volunteers were mustered out on January 28, 1899, and he reverted to his regular army rank of first lieutenant. The inscription appears to be from this time.

While Young was serving as captain of a Black company at the Presidio, San Francisco in 1903, he was appointed acting superintendent of Sequoia and General Grant National Parks, thus becoming the first Black superintendent of a National Park. Although it was only a temporary assignment, his men completed extensive road construction, accomplishing more at the underdeveloped park during his tenure than the three previous officers.

Young would eventually attain the rank of lieutenant colonel, the first African American to do so. Immediately prior to World War I, Young was removed from service reported due to health reasons, however, it was almost certainly to prevent Young from commanding white officers.