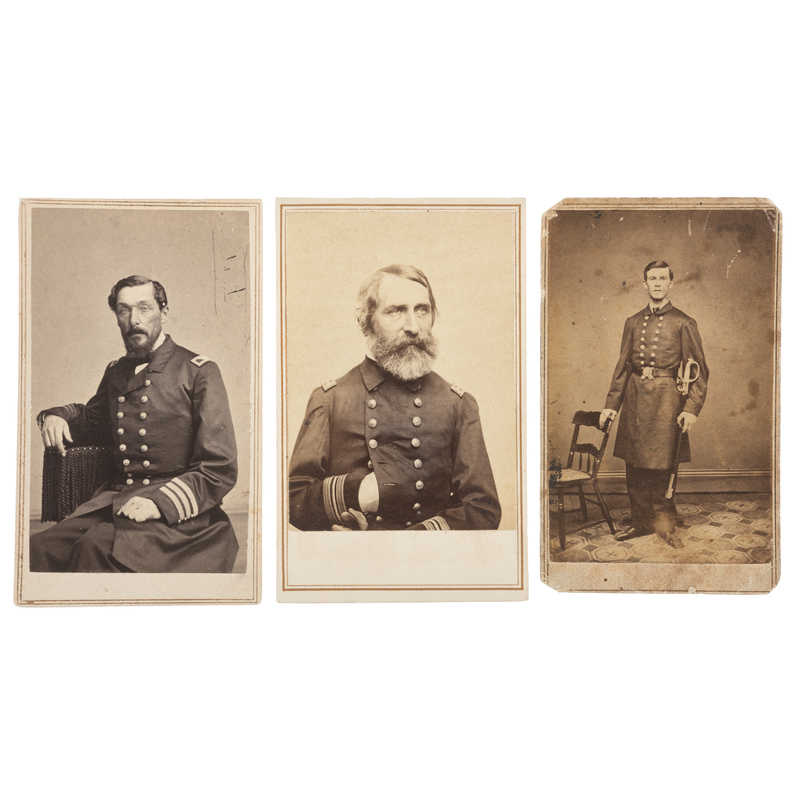 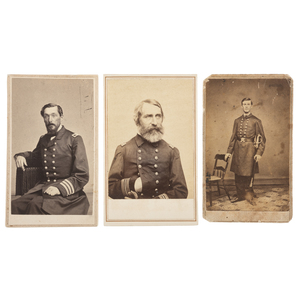 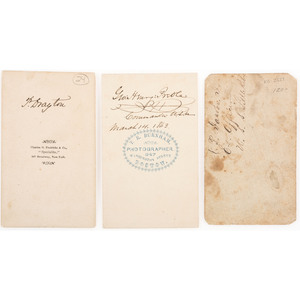 CDV of Officer Percival Drayton. Fredericks: New York, NY, n.d. Three-striper identified in ink on verso "P. Drayton." Percival Drayton: midshipman 12/1/27, passed midshipman 6/10/33, lieutenant 2/28/38, commander 9/14/55, captain 7/16/62, died 8/4/65. Drayton was given command of the gunboat USS Pocahontas in the fall of 1861 and participated in the capture of Port Royal, South Carolina, his native state. Drayton then took over the sloop of war USS Pawnee and throughout the summer of 1862 engaged in inshore operations from South Carolina to northern Florida. In September 1862, Captain Drayton became CO of the ironclad Passaic and engaged in the attacks on Forts McAllister and Sumter during the spring of 1863. Later he served as Fleet Captain under the ascendant Admiral Farragut in the West Gulf Blockading Squadron. Importantly, Captain Drayton commanded the flagship Hartford at Mobile Bay under Farragut's approving eye. Afterwards, Drayton was appointed Chief of the Bureau of Navigation, a important shore command, in April 1865.

CDV of officer striking a pose. T.R. Burnham: Boston, MA, n.d. Ink autographed on verso "Geo. Henry Preble / Commander USN / March 14, 1863." George Henry Preble (1816-1885): midshipman 10/10/35, passed midshipman 6/22/41, master 7/15/47, lieutenant 2/5/48, commander 7/16/62, captain 1/29/67, commodore 11/2/71, rear admiral 9/30/76, retired List 2/25/78, died 3/1/85. With significant naval pedigree, Preble first saw combat during the Mexican War and accompanied Perry to Japan and the Far East in 1853. Lieutenant Preble took command of the steam gunboat USS Katahdin early in 1862 serving under Farragut in the West Gulf Blockading Squadron. In July he was promoted to commander and given command of the steam sloop Oneida blockading Mobile Bay, but his career was soon derailed. The Confederate raider CSS Florida inbound from Cuba with a crew stricken by yellow fever managed to outrun the Oneida and her sister to the safety of Confederate guns at Fort Morgan. As a consequence Preble was ordered dismissed from the Navy despite considerable testimony that weighed of mitigating circumstances. Preble would ultimately be reinstated, serving later as commander of the Boston Navy Yard and the screw sloop of war Pensacola until 1870. After his retirement in 1878, Preble became an acclaimed writer, a bibliophile of both "naval and historical topics," and an early collector of Navy documents. Preble is also remembered as conservator and caretaker of the original "Star Spangled Banner" garrison flag of Fort McHenry fame. Admiral Preble died near Boston in March 1885.

CDV of young officer with sword. Uncredited, n.d. Identified in ink on verso "E. P. Jacobs , Jr. / Ex. Officer / USS Little Rebel." Nathaniel P. Jacobs: mate 12/10/63, dismissed 5/20/65. Little Rebel was a former Confederate cottonclad, captured and taken into Navy service in January 1863. She served primarily on the Mississippi River on patrol duty while Jacobs was aboard. In April 1865 she and other Union ships of the Mississippi Squadron were alerted to prevent the escape of Jefferson Davis. A ship's log kept by Jacobs during his service was passed on and retained by a descendant. A digital copy of the log is held by the Half-Shire Historical Society in Richland, New York.