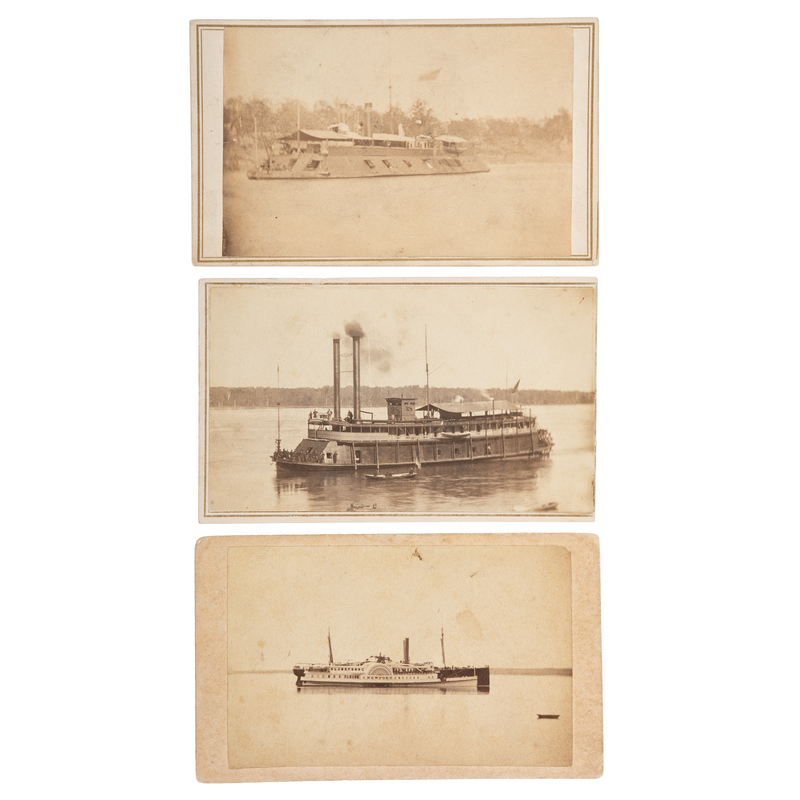 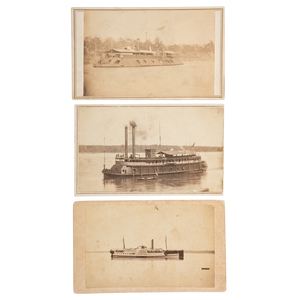 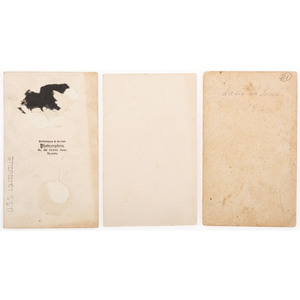 Lot of 3 CDVs. Brilliant view of an unidentified stern-wheel tinclad gunboat. Uncredited: n.d. Taken literally, the numeral "28" painted on the sides of her armored wheelhouse would suggest that she is the USS Silver Cloud, aka Gunboat No. 28. The vessel appears to have 4-5 gun ports per side with a single bow gun making her rather heavily armed for a tinclad, although given the extra weight not all of the armament would be mounted all of the time depending on draft and water levels. Here, a number of Navy tars can be seen congregating at the bow behind a tall pole which could be lowered into the water working as a primitive mine rake. On the forward of the twin funnels is an iron-wheeled boat howitzer. Silver Cloud was taken up from the civilian trade, converted at Cairo, and commissioned on May 4, 1863. She was assigned to the Mississippi Squadron and spent most of the war on routine patrol, interdicting small craft employed by the Confederates to move supplies. Silver Cloud was also employed as a swift transport to land raiding parties. On several occasions she broke up concentrations of enemy troops who had ventured within range of her guns. She once conveyed Sherman and staff from Memphis to Vicksburg in January 1864. Silver Cloud was decommissioned in July 1865 and sold at auction in August.

CDV identified as "USS Louisville" on verso. McPherson & Oliver: New Orleans, LA, n.d. Originally built for the Army, the City-class ironclad gunboat was one of the larger purpose built warships on western waters. Commissioned in January 1862, Louisville would participate in most of the major operations conducted by the Brown Water Navy. For more details of her service read elsewhere in catalog.

CDV showing profile of side-wheeler named Newport, having the name painted below her covered paddle box. The name "Addie A. Searle" is inked on the back. Taken at some distance from shore, Newport appears to be tied to a slightly larger vessel with a dark profile having twin funnels amidships. Under magnification a number of uniformed crewmen can be seen standing against the forward rails. Her white livery suggest that she is a civilian vessel. In fact, a Marine Insurance Policy dated January 1866 (Online) relates that the Boston, Newport and New York Steamboat Company built a fast vessel named "Newport" in 1865, but no other information could be found.

Carte of Silver Cloud with strong clarity revealing much detail.  The very edge of the right border has been trimmed slightly, otherwise VG.  The Louisville CDV is light due to overexposure and detailed are hazy.  Verso once had a revenue stamp now torn away causing damage, still G+.  Newport view with good clarity, mount toned and soiled with rounded corners, G+.