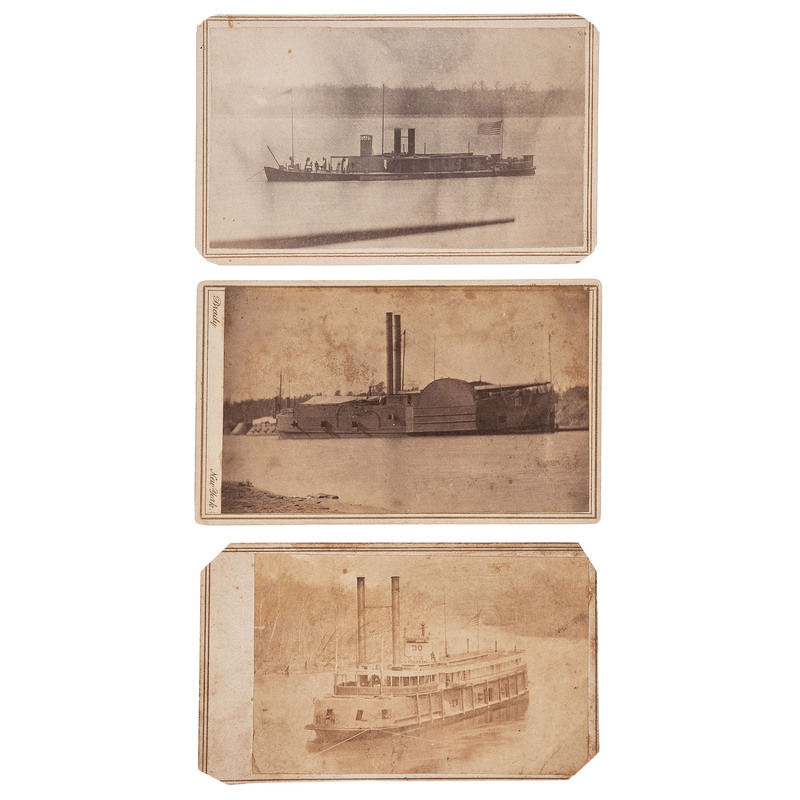 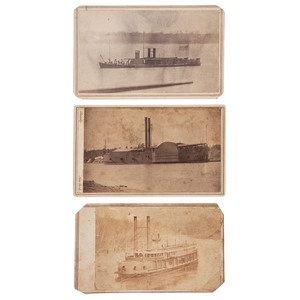 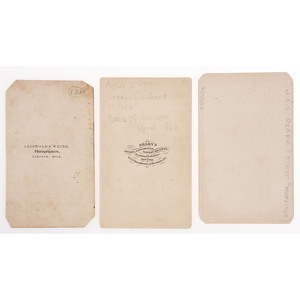 Lot of 3 CDVs. First carte pencil identified as the "Wooden Gunboat/Tyler" in modern hand. Brady: New York, NY, n.d. The A.O. Tyler was a commercial sidewheel steamboat (built 1857) taken over by the Navy and commissioned in September 1861 as the gunboat USS Tyler. The Tyler saw early service on the upper Mississippi transporting troops under U.S. Grant in the abortive attack on Belmont, Missouri, later joining in the bombardment of Columbus, Kentucky. She aided in the capture of Forts Henry and Donelson while simultaneously engaged in aggressive paroling on the Tennessee River that resulted in the capture and destruction of three incomplete rebel gunboats, notably the CSS Eastport on February 7, 1862.  During a desperate moment at the battle of Shiloh on April 6 the gunboats Tyler and Lexington were instrumental in securing the left of the faltering Union line, allowing Grant to stage a counter attack next day.  Wrote Grant, "in this repulse much is due to the presence of the gunboats." On April 19 Tyler captured a Confederate transport on the river and burned another.  For the next fourteen months she was engaged in various operations, both navy and army, that culminated in the capture of fortress Vicksburg. USS Tyler was noteworthy in operations underlying the capture of Arkansas Post and Haynes Bluff and well as Helena, Arkansas where she brought her guns "to bear on an attacking Confederate force."  At the end of the war USS Tyler, with a volunteers crew, assisted in the rescue of numerous survivors - many of whom were former Andersonville inmates - of the Sultana explosion that occurred north of Memphis on April 27, 1865.  Tyler was laid up in June 1865 and sold out of service in August.

CDV of the USS Ozark. Uncredited: n.d. USS Ozark was a single turreted monitor commissioned in February 1864. She spent the entirety of her short career on the Mississippi taking part in the Red River Campaign becoming trapped by low above the falls of Alexandria with the rest of Porter's fleet. Rescued by an incredible feat of engineering - a pair of temporary dams - she later patrolled the lower Mississippi for the duration of the war. Ozark was decommissioned in July 1865 and sold out of service in November.

CDV, birds-eye view of the USS Fawn. Griswold & White: Corinth, MS, n.d. Note the number "30" painted on her pilot house. The sternwheel gunboat USS Fawn (No. 30) was commissioned in May 1863 and carried six guns. She served primarily on the White River but also patrolled the Mississippi, Tennessee, and Arkansas Rivers escorting Union Army transports, ferrying troops and carrying dispatches. On several occasions she engaged Confederate shore batteries and bombarded enemy troop concentrations. At Clarendon, AR, USS Fawn was holed by Confederate shot but not seriously damaged. She was decommissioned in June 1865 and sold in August.

Tyler CDV shows mottling with average clarity, near VG.  The view of Ozark is somewhat hazy particularly in the left field with just average clarity.  Corners are rounded, G.   Fawn carte is light with notable surface wear and clipped corners  Shortened albumen is offset to right, about G.