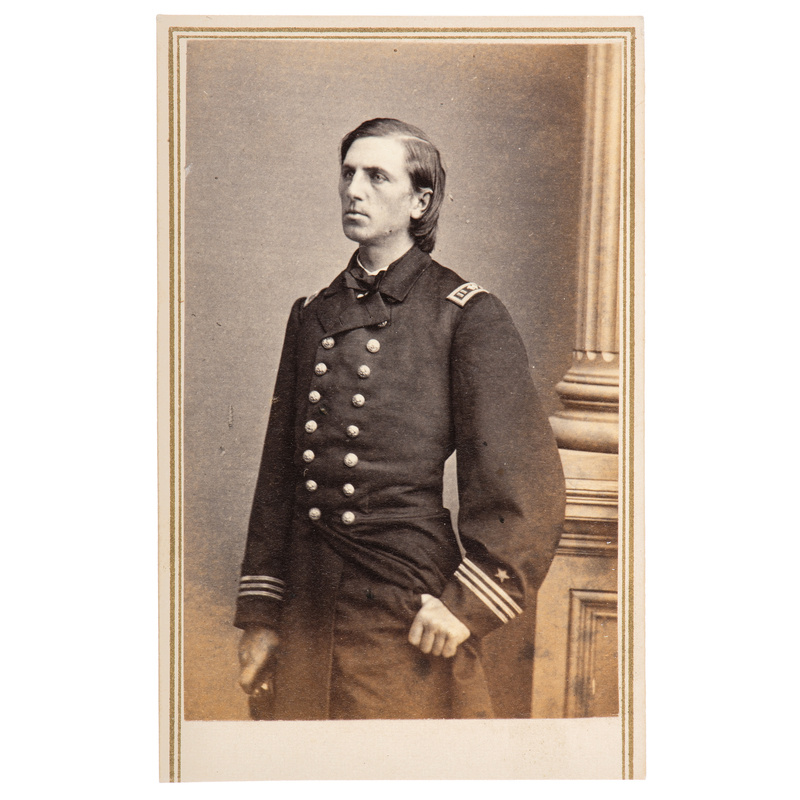 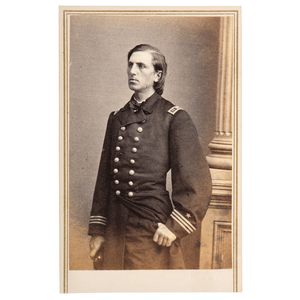 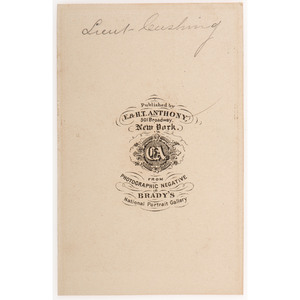 Born in Wisconsin, William Barker Cushing (1842-1874) moved with his family to Chicago, then Gallipolis, OH. Upon the death of his father in 1847, Cushing's mother moved the family to Fredonia, New York, supporting her family by running a school. Young William secured a position as a page in the House in Washington in 1856, and the following year was accepted to the Naval Academy as an acting midshipman (9/25/57).  He was not the student his mother surely hoped, and lack of study and aversion to discipline (a harbinger of things to come) resulted in his dismissal from the Academy and resignation from the Navy on March 23, 1861.  With war underway Cushing was reinstated as Acting Master's Mate later in 1861.  By the following July, serving in the North Atlantic Squadron, Cushing was promoted lieutenant (7/16/62).

Throughout the war, Cushing engaged in daring and dangerous actions characterized by stealthy attacks on Rebel installations with a handful of "volunteers," often under heavy fire. Miraculously he came out of these scuffles as the only one not killed, wounded, or captured. The destruction of the Confederate ironclad ram CSS Albemarle was a typical Cushing operation.  On October 27, 1864 Cushing crept up the Roanoke River at night with 21  "volunteers" in a cutter and small steam launch rigged with a spar torpedo and a boat howitzer.  He found the Albermarle protected by a log boom connected by chains meant to prevent approach by fire ships and thwart small boats with boarders. Cushing eluded lookouts most of the way upriver, but one alert sentinel on Albermarle spotted the raiders in the dark and sounded the alarm. Coming under a barrage of small arms fire, Cushing managed to ram the Albermarle at full steam, carrying the launch over the slippery logs, pulling the lanyard and exploding the spar torpedo under the Rebel vessel.  At the same moment, Cushing and his men were thrown into the water by the concussion, struggling survivors now separated from the group. Cushing swam downstream, attempting unsuccessfully to save one of his crew who was in mid-river, eventually climbing ashore on the other side some distance downstream. He then trudged through swamps until he came upon a Confederate shore post, and, seizing the first opportunity, commandeered their skiff, rowing to the safety of the Federal picket vessel, Valley City. For this daring deed he was immediately promoted to lieutenant commander to date from October 27, 1864.

Suffering the ill effects of worsening health, Cushing remained in Navy after the war and advanced to commander (at that time the youngest officer to hold the rank) on January 31, 1872.  Another incident occurred just before the end of his life that demonstrated another aspect of Cushing's modus operandi.  In 1873, upon learning that the Anglo-American crew of the Virginius, a ship hired by Cuban insurrectionists to land contraband munitions,  were being summarily executed at Santiago de Cuba, Commander Cushing took the USS Wyoming, of which he was commander, and without orders steamed for Santiago.  He then informed the Spanish governor that if he intended to execute any more of the crew (53 had already been shot), he had better remove all women and children from Santiago first.  The executions stopped but not before England and the United States were nearly drawn into a war with Spain.  During the summer of 1874 Cushing was sidelined from sea duty and took up the post of executive officer at the Washington Navy Yard, a job that did not mesh with the daring officer's idiom.  Meantime, his health deteriorated at a rapid pace and doctors were unable to diagnose the cause of the severe pain in his hip.  By Thanksgiving he had become bed ridden and was given doses of morphine to ease the "constant and terrible" pain.  On December 8, 1874 he was removed to St. Elizabeth's Hospital and died comatose on December 17 in the presence of his wife and mother. His brilliant career cut short with accolades yet to be realized, William B. Cushing was buried on January 8, 1875 in Bluff Point, the Naval Academy Cemetery at Annapolis.

The Richard B. Cohen Civil War Collection Lots 133-162 Cowan's is pleased to offer the first contingent of an unparalleled assembly of Brown Water Navy images archived over a lifetime of study by consummate collector Richard B. Cohen, a familiar name to many in the field of Civil War photography. To those who knew him best, Richard B. Cohen will be remembered as a "disciplined collector who maintained a relatively narrow focus having built an important, perhaps unsurpassed collection in his area of specialization." Richard was particularly well read and his historical knowledge informed his collecting as reflected by the photography that follows. The array of carte-de-visites and albumen photographs gathered here include a number of identified naval officers - both famous and obscure - along with a handful of enlisted sailors and Mississippi Marine Brigade images, and, significantly, many views of unique Brown Water Navy sidewheel and sternwheel warships - no two vessels looking exactly the same. Subjectively, the most appealing aspect of the Cohen Collection are the photographs of these gunboats, transports, and impressed vessels quickly converted at St. Louis, Cairo, and Cincinnati for duty on the waters of the Mississippi River and its tributaries. The gamut of improvised warships range from the earliest types of steam powered vessels first taken up by the Army to create a small timberclad flotilla, to the several purpose-built War Department Ellet rams, and later, the more numerous classes of tinclads, some converted but all built for and crewed by the Navy. A few captured Confederate vessels impressed into Union service are also present. It is supremely evident that Richard B. Cohen's collecting instincts were always evolving, but uniformly refined. We trust that both advanced and neophyte collectors will find something to pique interest now that the time has come to inevitably recycle these exceptional images to a new cadre of aficionados.

Carte is near EXC. with strong clarity.  The double gold row of margin is trimmed away at bottom edge of mount.