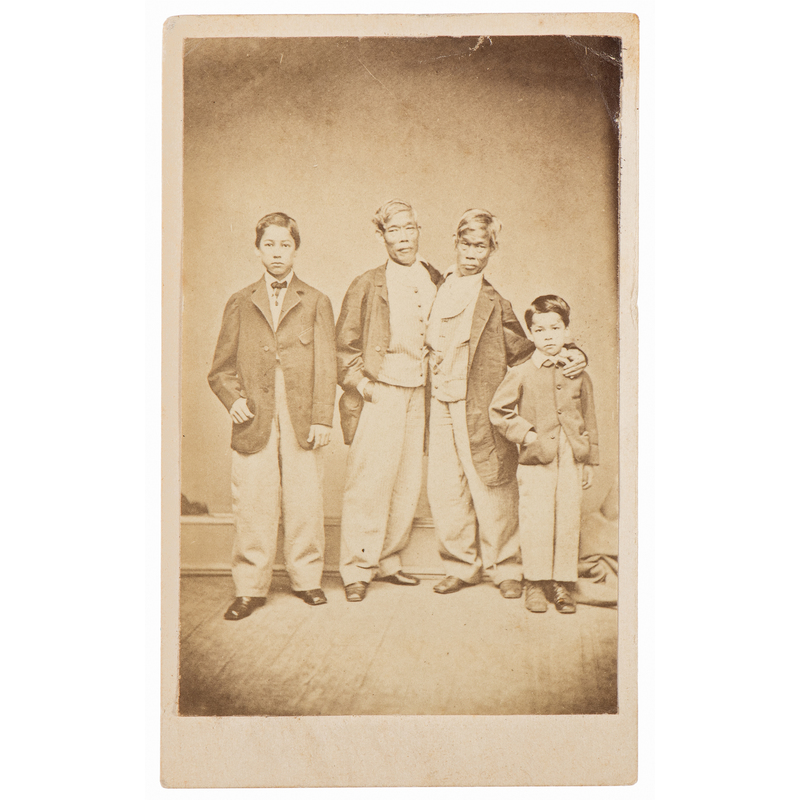 Unmarked CDV group portrait of conjoined twins Chang and Eng Bunker (1811-1974), posed between their two sons Patrick Henry Bunker (1850-1938, far left, next to his father Eng) and Albert Lemuel Bunker (1857-1944, far right, son of Chang). Although this CDV is uncredited, a copy at the North Carolina Collection Photographic Archives at the Louis Round Wilson Special Collections Library at University of North Carolina Chapel Hill is credited to Washington Lafayette (W.L.) Germon of Philadelphia at his 914 Arch Street address, which he operated from 1865 to 1872. A ca 1865 date for the image seems likely given the apparent ages of Patrick (about 15) and Albert (about 8).

The conjoined twins Chang and Eng were born in Siam, now Thailand in 1811. From their fame gained from extensive touring, they became the source of the term "Siamese twins," an now-outdated synonym for conjoined twins used by generations of westerners. The twins were "discovered" in 1829 by British merchant Robert Hunter, who paid their family to exhibit them on a world tour. Later, Chang and Eng went into business for themselves and after achieving great financial success, in 1839, they purchased a farm in Surry County, North Carolina as well as enslaved people to work the plantation. The same year they became naturalized Americans and took the surname "Bunker." In 1843, the twins married sisters, Chang to Adelaide Yates, and Eng to Sarah Anne "Sallie" Yates with whom they would each have many children, Chang siring 10, and Eng 11.

During the Civil War, the brothers supported the Confederacy with two of their sons, Christopher Wren (Chang's son) and Steven (Eng's son) reportedly volunteering for service with the CSA. At the war's conclusion, the Bunkers lost portions of their land after the war and the people they enslaved were emancipated. Facing financial hardship, they returned to public exhibitions, though with markedly less success than before.

Chang died rather suddenly in January 1874 of pneumonia. Although doctors were called to perform an emergency separation, Eng refused and died later the same day.

Patrick Henry often managed the plantation when his father and uncle were touring, and later moved west with his brother James Monroe, settling in Summer County and later Medicine Lodge, Kansas.

Albert Lemuel lived his whole life in the home of his birth in North Carolina. Notably, he attended the University of North Carolina from 1878-1880 and is recognized as one of the earliest Asian American students at the institution, possibly the first. 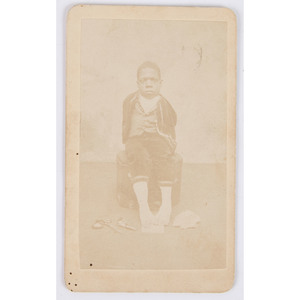 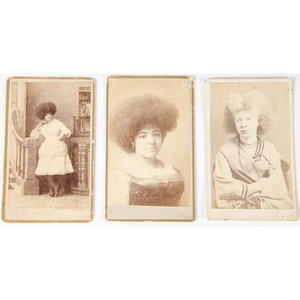 Circus and Sideshow Performers, CDVs of "The Albino," Helen Ann Windman Walker, and "Illavaro the Egyptian" 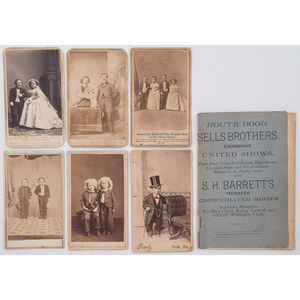 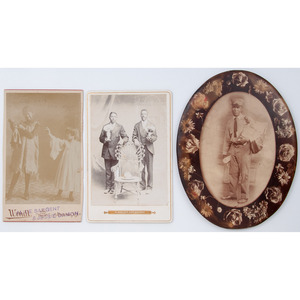