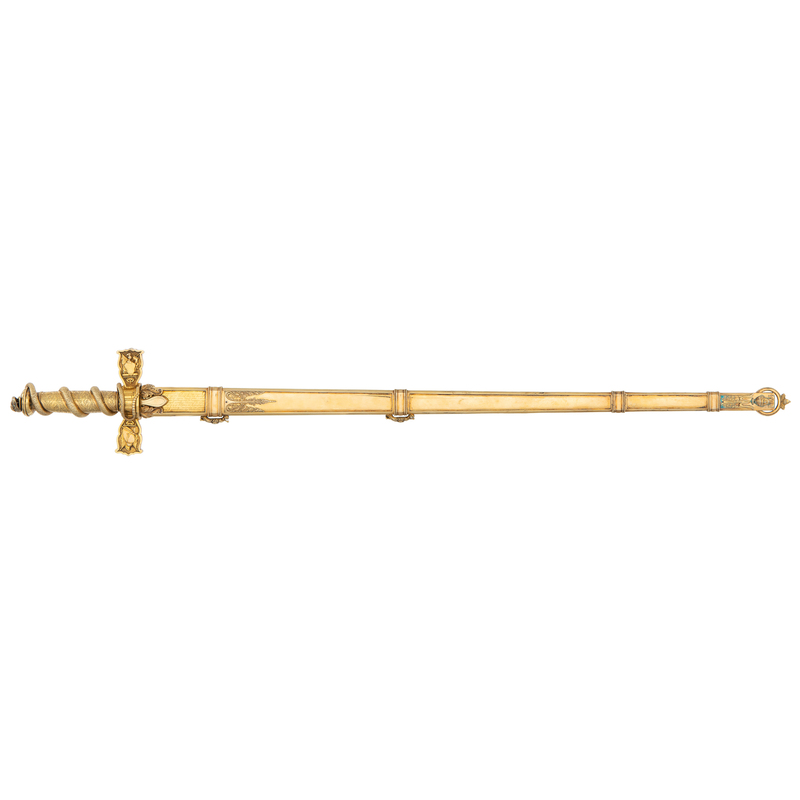 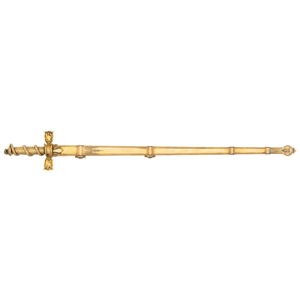 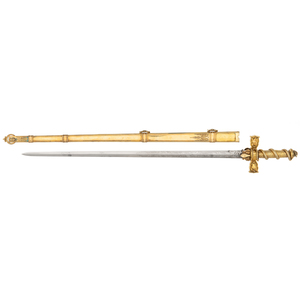 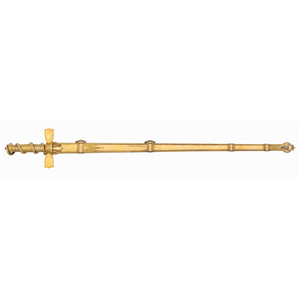 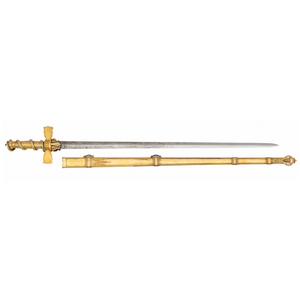 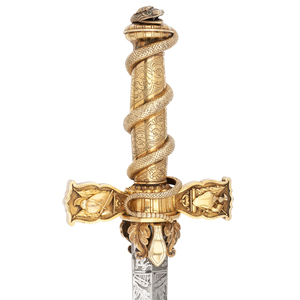 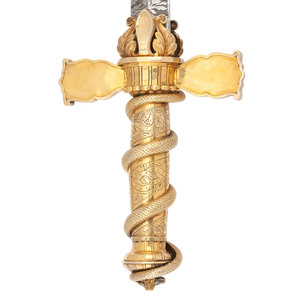 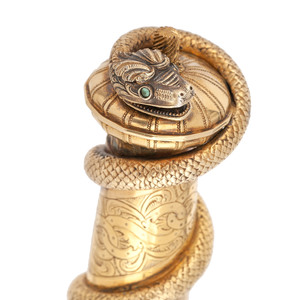 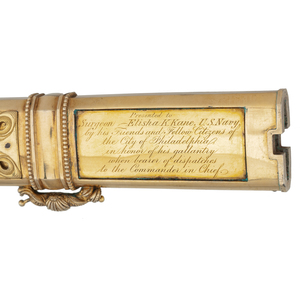 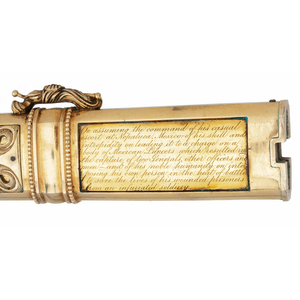 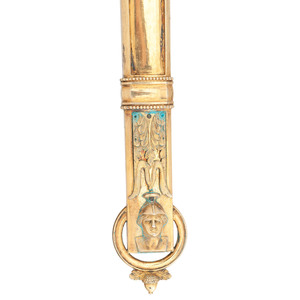 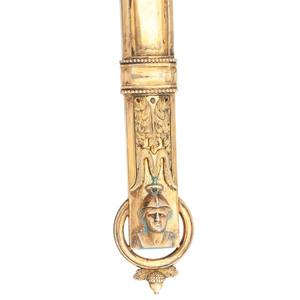 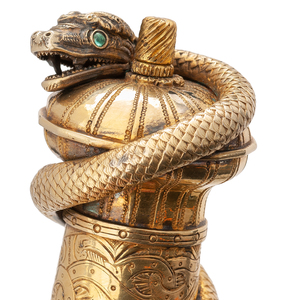 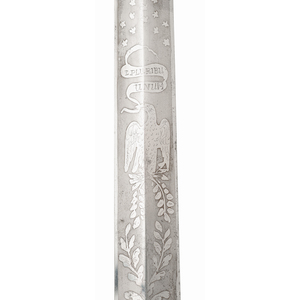 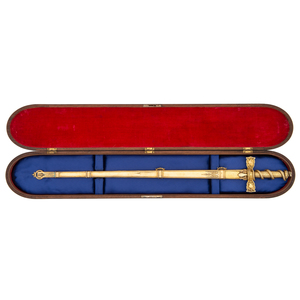 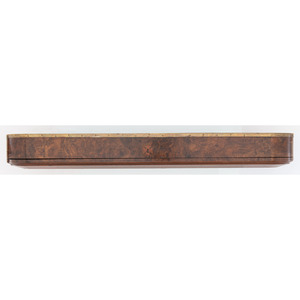 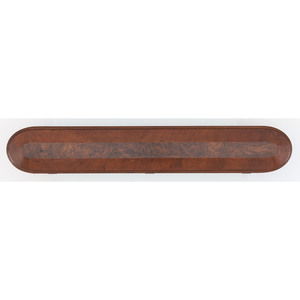 28.25" spear-point, double-edged blade with prominent median ridge. 5.75" cast gilt brass hilt with 5" cross guard cast with martial themes on the obverse and left plain on the reverse. Engraved grip further decorated with a highly detailed serpent with emerald eyes encircling the entire grip with the open mouth serving as the finial of the pommel cap. Blade with frosted etching showing flowing foliate scrolls, martial themes and panoplies of arms. Reverse with an American Eagle with a ribbon that reads E Pluribus Unum in its mouth as the central theme. Gilt brass scabbard with highly detailed mounts and decorations, including delicate beading, floral themes and classical imagery on the drag. The obverse of the scabbard throat is engraved with the following presentation: Presented to / Surgeon Elisha K. Kane, U.S. Navy / by his Friends and Fellow Citizens of / the City of Philadelphia / in honor of his gallantry / when bearer of dispatches / to the Commander in Chief. ;The reverse of the throat is engraved On assuming the command of his casual / escort at Napaluca Mexico of his skill and / intrepidity on leading it to a charge on a / body of Mexican Lancers which resulted in / the capture of two Generals, other officers and / men - and of his noble humanity on inter- / posing his own person in the heat of battle / to save the lives of his wounded prisoners / form an infuriated soldiery. Sword is continued in a highly figured oval wood case that may be circassian walnut with a red velvet lining and blue satin-covered padding.

Elisha Kent Kane (1820-1857) overcame rheumatic fever as a child and emblazoned his short life as an adventurous naval surgeon who survived the Mexican War and Arctic explorer before dying at just 36. Scion of a socially prominent Philadelphia family, Elisha Kane entered the University of Virginia in 1837 intent upon a career in civil engineering. The following year Kane was stricken by a severe attack of rheumatic fever that caused him to withdraw from school and return home to Philadelphia with a permanently damaged heart. Having sufficiently recovered by the fall of 1839, he began the study of medicine at the University of Pennsylvania and after a period of residency at the Blockley Almshouse hospital graduated in March 1842. Ironically, his father John Kintzing Kane, an influential Jacksonian politician and distinguished jurist, sought for his son an appointment as a naval surgeon believing that the young man did not have the stamina to endure the rigors of "a normal medical career." While awaiting word of the commission in May 1843, Kane peremptorily joined the diplomatic mission headed by the newly appointed Ambassador to China, Massachusetts statesman Caleb Cushing, as the expedition's physician. The lengthy sea voyage took Kane to Madeira, Rio de Janeiro, Bombay, Ceylon, Macao and Manila. In the Spanish Philippines Kane explored the recently active volcano of Taal where he was nearly overcome by noxious fumes, and barely escaped. While in the distant Orient Kane witnessed protracted negotiations that culminated in the Treaty of Wanghia (July 3, 1844), the first between the United States and Imperial China then seething in upheaval over concessions forced by the recent Opium War with Great Britain. Kane had taken leave of the legation in June 1844 and oblivious to the dangers traveled extensively while "conducting a hospital boat at Whampoa" for six months. Kane then made his way back home taking a rather circuitous route by way of India, Egypt, Athens and Paris followed by a transatlantic voyage that landed back in Philadelphia in September 1845, literally two years away traveling around the world.

Elisha Kane's navy appointment as assistant surgeon had been approved in July 1843 just as he had reached China. In his new role as ship's surgeon Kane then embarked upon two cruises including an anti slavery patrol to the West African coast during the early part of Mexican War 1846-47 that he found "stultifying" despite becoming seriously ill once more. Given leave to recover, the redoubtable Kane journeyed directly to the Washington, D.C. in October 1847 "seeking assignment to duty more stimulating than that of ship's doctor." More than he could have imagined his wish was to be realized. Surgeon Kane was duly given a most unusual and dangerous task which would later result in national accolades manifest by this very presentation sword given by "his friends and fellow citizens of Philadelphia" to their home town hero. With no military experience per se, Surgeon Kane, attached to the Marine Corps, was to deliver government dispatches including, it is said, "a secret message" to General Winfield Scott then occupying Mexico City following its capture by American troops on September 15, 1847. An excerpt from an Elisha Kent Kane Historical Society article relates that: "En route, Kane and the mercenaries hired to escort him became engaged in a skirmish with Mexican forces, commanded by Brigadier General Antonio Gaona, former Governor of Puebla. Although Kane's party got the better of Gaona's forces, Kane himself received a serious lance wound. In spite of his injury, he successfully restrained his men from murdering Gaona. He then saved the General's son by stitching up his wounds with the tine of a fork and thread. Gaona insisted upon hosting Kane at his estate for the duration of his recovery from the lance wound. When Kane returned to Philadelphia he was treated like a hero. Very little is recorded about the skirmish, also known as the battle of Nopalucan, but it occurred on January 6, 1848 about 115 miles east of Mexico City along the National Highway at the namesake town in Puebla province. Post-war, Kane resumed the dreaded routine of a naval surgeon afloat serving aboard the U.S.S. Supply and U.S.S. Walker which, given his prior sentiments, must have been onerous.

The best remembered part of Kane's short life commenced in 1849 when he petitioned the Secretary of the Navy to accompany a proposed expedition to the Arctic to search for the missing British explorer, Sir John Franklin, presumed lost in the Canadian Arctic since 1845. In May 1850 he received welcome orders to proceed to New York Harbor to join the First Grinnell Expedition as ship's surgeon. The expedition was composed entirely of navy personnel crewing the refitted whaling brigs Advance and Rescue commanded by Lieutenant Edwin J. DeHaven, USN. The two vessels got underway on May 22, 1850 bound for the Barrow Strait with instructions to search there and northward in the Wellington Channel and westward to Cape Walker. At Beechy Island in August 1850 traces of the Franklin's Expedition were found, including graves of crewmen, confirming that Franklin's ships, Erebus and Terror, had wintered there in 1845-46. Kane recorded in his journal on August 28 "that there were seven ships, under three different commands within hailing distance of Beechy Island with two more ships of another expedition trapped in the ice only 15 miles to the west." The Grinnell Expedition spent the winter of 1850-51 embedded in the Arctic ice, breaking free only in early June to reconnoiter northward through the ice-pack before turning for New York where the ships docked in September 1850. Kane spent a portion of the next two years writing a detailed narrative of the voyage and speaking before large public audiences as well as lecturing at scientific societies and the Smithsonian. As his expertise became more widely known he began to advocate for another expedition to search the "Polar Sea" for Franklin. A second smaller expedition reached fruition in 1853 thanks to wealthy benefactors and the navy who put Kane command of the civilian brig Advance with a mixed crew of just eighteen men.

The Advance left New York on May 30, 1853 bound for Greenland. The expedition proceeded northward up the west coast of Greenland into an uncharted Peabody Bay (so named by Kane) where, by the end of August, the Advance was stopped by ice. Kane had taken sledge dogs planning to use this method of travel to extend the northern search range during the depth of the Arctic winter. Localized expeditions in small boats were also utilized to explore and gather scientific data. During the winter months of 1854 temperatures plunged as low as minus 70 below as intolerable conditions turned deadly. Scurvy, malnutrition and severe frost bite took its toll. While small detachments split up and continued to survey, two men died in March 1854 after most of the dogs had already been consumed. By mid-summer Kane was alarmed that Advance would remain ice-bound and so on July 12 he and five volunteers attempted to reach Beechey Island by small boat. Kane's small contingent was forced to turn back. On August 28 another party of desperate men (reported as seven or nine) then set out overland to reach Upernavik to the south in defiance of Kane who now counseled that the expedition remain together. This attempt also failed as the group of dead men walking staggered back to Advance in early December. thanks to the aid of native Inuit people. Morale plummeted, isolated and trapped for twenty one months - facing a third winter on the ice - it was decided to abandon the Advance in May 1855 and make for Upernavik in small boats. A harrowing eighty-three day trek traversing at least a thousand miles of Arctic ice was successful with the loss of one man. The sixteen (or seventeen depending on the source) survivors were taken aboard a Danish ship which made its way to Godhavn on Disko Island. While the expedition did nothing to solve the mystery of the lost Franklin, Kane had started early on to record meteorological data, notes on the Inuit people, and had charted the western coast of Greenland with detailed topographical observations that no explorer had done. Despite being in extremely poor health upon returning to Philadelphia, Kane threw himself into penning an account of the lengthy arctic ordeal entitled, Artic Explorations: The Second Grinnell Expedition in Search of Sir John Franklin, 1853, '54, '55.

Invited to lecture in London, Kane once more crossed the Atlantic and visited England in late 1856. Kane must have known that his time was short and he determined to make what would become his final journey, this time the destination was to the warm clime of the southern hemisphere --Havana, where he hoped to restore his vitality in the face of decades of chronic illness. After suffering two severe strokes he died there in on February 16, 1857 at age 37. As a measure of esteem the Spanish Governor of Havana accompanied Kane's remains back to New Orleans. Kane's final sojourn to Philadelphia took seven days while all along the route - from New Orleans to Cincinnati - the banks of the Mississippi were lined with mourners. The train cortège from Cincinnati was slowed by an outpouring of the public wishing to pay their respect at every town and city. Kane was solemnized by an elaborate public funeral in his native Philadelphia and was buried in Laurel Hill Cemetery. Kane had experienced more travel and adventure, accomplishing more in thirty-seven years than many do given a longer life. Kane's body of authorship, two books "that still rank high for literary merit" and numerous scientific articles, became an enduring legacy and barometer for later 19th century Arctic exploration. Elisha Kent Kane's Mexican War presentation sword for "skill and intrepidity" is solidified by his later Arctic adventures for which he is remembered today.