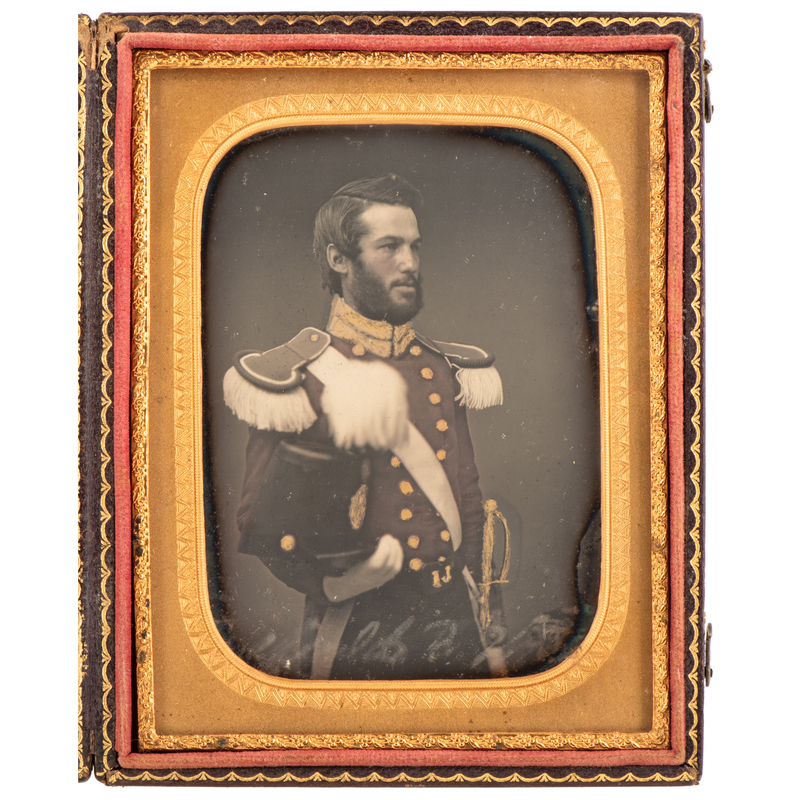 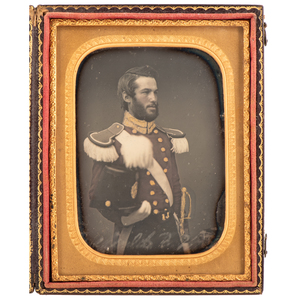 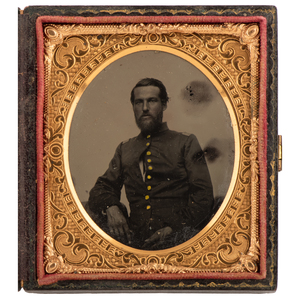 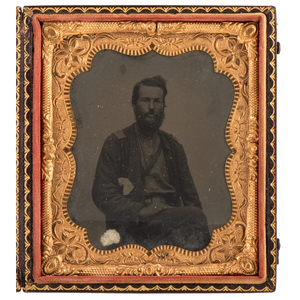 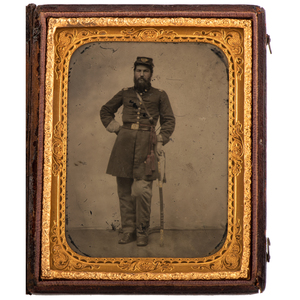 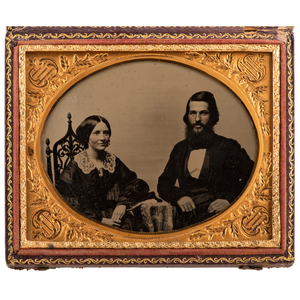 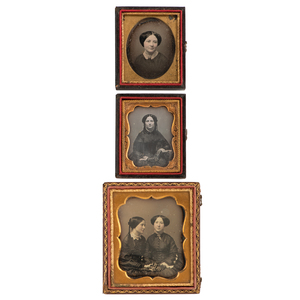 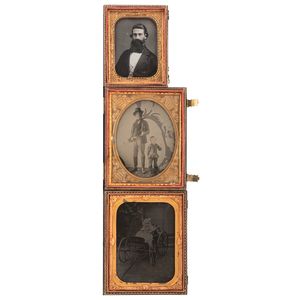 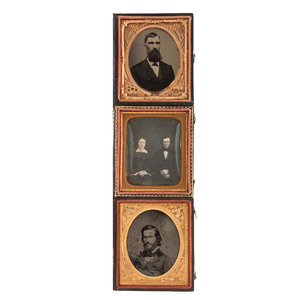 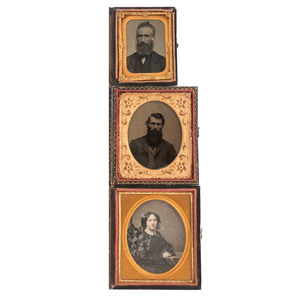 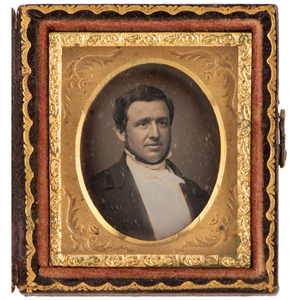 Lot of 18 cased images, many identified to the Wiggin Family of Bangor, Maine, most notably, Captain Rinaldo B. Wiggin. Each image is housed in full leather or pressed paper case, and many include an inscribed note identifying the subject of the portrait.

Rinaldo B. Wiggin (1827-1864) was a native of Bangor, Penobscot County, Maine and had served in the pre-war Portland Light Infantry militia company before joining Company A of the two-year 2nd Maine Volunteer Infantry as 1st lieutenant on May 28, 1861. Wiggin was promoted captain on August 30 and evidently served in command of the company (without mention) in "eleven bloody and hard-fought battles" including First and Second Bull Run, Hall's Hill, Yorktown, Hanover Court House, Gaines' Mill, Malvern Hill, Antietam, Fredericksburg and Chancellorsville before mustering out with the distinguished regiment on June 9, 1863. The 2nd Maine was initially assigned to Porter's Division before the army was reorganized, and then briefly to the 3rd Corps before joining the 5th Corps, Army of the Potomac in May 1862 for the duration.

At home in Bangor for the summer, the stalwart New England patriot procured an early government disability pension but still saw fit to reenlist in the Veteran Reserve Corps commissioned as captain, Company A, 24th Regiment VRC on December 26, 1863. Captain Wiggin later died in service "of inflammation of the stomach and bowels" at Wisewell Barracks, Washington, DC on August 1, 1864. The captain's widow, Fannie S. (Patten) Wiggin, applied for and received a wartime pension (#62072) found online at Fold3.com, comprising a voluminous 42 pages of the usual affidavits and testimonial documentation. Other than confirming the birth of a daughter and a son before the war, Ancestry.com related nothing of Wiggin's early life in Bangor. The soldier's premature demise at age 37 is recorded in Find A Grave.com and commemorated by a spiraling Victorian obelisk in Bangor City Cemetery (Plot 3PG).

Dating around 1858 the splendid tinted quarter plate daguerreotype signed "Rinaldo B. Wiggin" across the bottom of the plate shows the letters "LI" applied in gilt on the belt plate by an unknown artist. Aside from the designation of "Light Infantry," there is nothing else in the portrait (or otherwise) that would indicate which militia company Wiggin might have been a member of before the war. By 1860 the organized Maine militia was much reduced following a brief surge in interest during the mid 1850s corresponding to the Crimean War. Wiggin most likely served in a venerable company known as the Portland Light Infantry, first organized in 1803. Period newspaper descriptions of Maine militia uniforms are virtually non-existent while the larger organization of the state militia companies underwent intermittent changes. Prior to 1860 the Portland Light Infantry was part of the 1st Regiment Light Infantry of the 1st Division, later in 1860 transferred on paper to the 2nd Division. With the outbreak of the war it is certain that Wiggin was no longer an active member of the Portland Light Infantry as he is not listed on the company roster for 1861 nor is he mentioned anywhere in Major John M. Gould's linear History of the "First-Tenth-Twenty Ninth Maine Regiment" (Portland, 1871). Without state mandated dress regulations the varied nature of Maine militia uniforms is underscored by Frederick P. Todd who wrote "...most adopted blue tailcoats, but three of fourteen we have clear record of agreed on grey coats, and one each on black, scarlet, buff and green" (Volume II, State Forces, p.867).

Wiggin's rank at the time of the daguerreotype cannot be established. The cloth epaulettes as opposed to bullion would strongly suggest that Wiggin was an enlisted man rather than an officer. The otherwise plain, straight-bladed militia sword with urn shaped pommel and cross belt attachment is more comfortably suited to an NCO or private but there are no chevrons noted in the photograph. The shako appears to be a derivative of the US M1851 Dress Cap having, presumably, a brass plate incorporating the state seal topped with a plume of flamboyant white feathers.

The war had taken its toll on Rinaldo B. Wiggin as his appearance across the progression of this incomparable military archive attests. In the daguerreotype we see a younger man still with the transient vitality of youth. Two of the later wartime tintypes (quarter plate and sixth plate) depict a mature soldier with jaunty confidence and steely demeanor. The last wartime image, a sixth plate tintype, portrays a somewhat disheveled officer now choosing to sit - thinner and resigned - probably suffering from as yet unseen symptoms of disease contracted "in the line of duty" - a scourge that would ultimately claim two thirds of the approximate 660,000 deaths during the Civil War. A sixth plate ambrotype (in poor condition) of Wiggin in civilian dress is also enclosed, along with a sixth plate portrait of an older, bearded fellow identified as "R.B. Wiggin," although he doesn't appear to be Rinaldo.

Additional images of note include four daguerreotypes (two sixth plate, two ninth plate) of Rinaldo Wiggin's wife, Fannie S. Patten, as well as a quarter plate ambrotype of the husband and wife seated together in a studio setting. The artfully posed daguerreotypes of Fannie depict the young woman between the ages of 16 and 18, one of which is a lovely portrait of Fannie seated with her sister Helen. A sixteenth plate daguerreotype of noted American silversmith, Zebulon Patten, presumably Fannie's father, accompanies the lot.

Remaining images include a sixth plate daguerreotype of a young couple identified as Samuel Plummer Jr. and his wife, Mary Plummer, ca 1843; quarter plate daguerreotype, sixth plate ruby ambrotype, and ninth plate tintype of unidentified gents sporting long beards; half plate ambrotype of an identified infant seated in a carriage; and half plate ambrotype showing an aged man wearing a patterned vest and tall boots, with a cigarette hanging from his mouth. He holds a long stick in both hands. A young child stands beside the curious character. Housed in full case with imprint of Newcomer's Gallery, Philadelphia, PA on velvet interior. See also Lots 26 and 280 for additional photos from the Wiggin Family of Bangor, Maine.

Quarter plate daguerreotype of Wiggin extremely clear, minor tarnish along perimeter of plate. As noted above, Wiggin's name (possible signature) can be seen on the cover glass. Perhaps it is original to the piece.

Tintype of Wiggin in sack coat, some type of white mark/remnant of paper? on plate at lower left. Image resealed so not removed from seals. Image is a bit dark.

Quarter plate tintype of Wiggin in uniform, some nicks/few scratches throughout plate, including along perimeter where plate meets mat.

One sixth plate of Fannie Wiggin shows scattered spotting on plate. Others with minor spotting, some tarnish along perimeter. Ambrotype of Fannie and Rinaldo is very clear.

Half plate ambrotype of man and child, damage to emulsion and varnish.