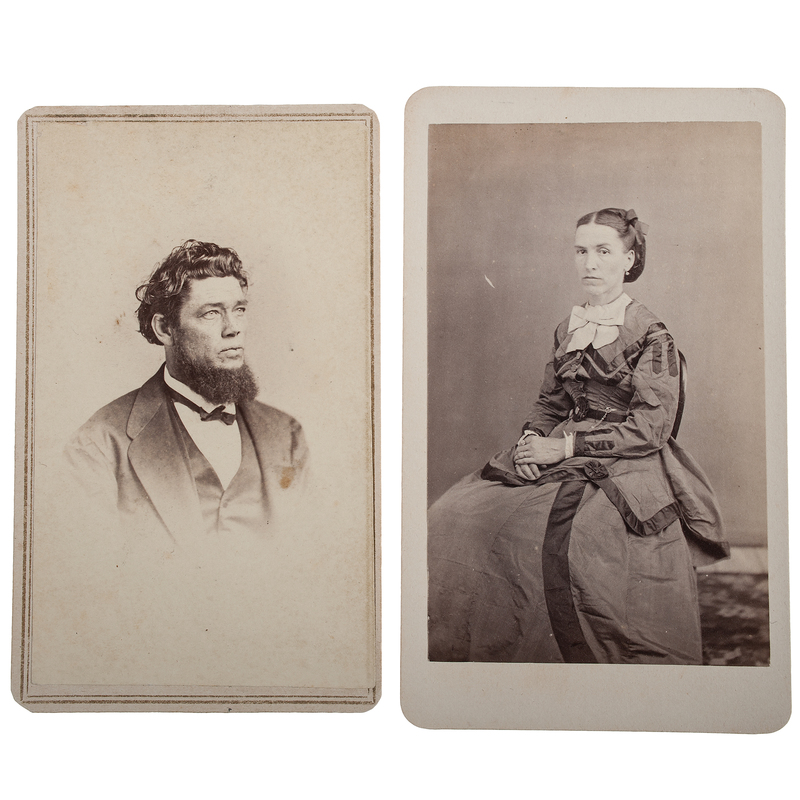 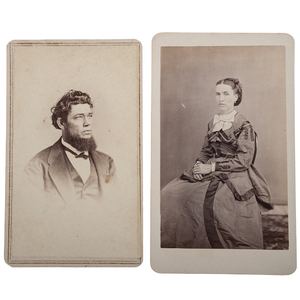 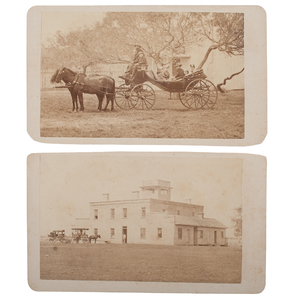 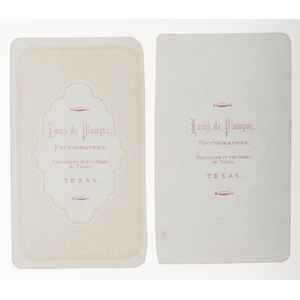 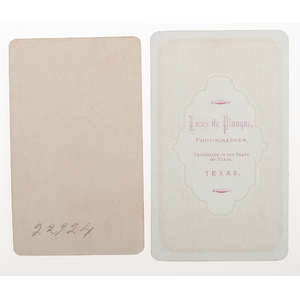 Lot of 4 CDVs, all but one with Louis de Planque, Travelling in the State of Texas backmark. Images include: portrait of Captain Robert King, no backmark but attributed to de Planque, and a portrait of his wife, Henrietta, with de Planque backmark; outdoor view of King Ranch with a horse and two carts parked near the large home; and view of Captain King's family seated in a horse-drawn buggy at their ranch in Kingsville, TX, verified by the King Ranch.

Richard King’s personality was almost as big as the state of Texas, and his personal narrative reads like a Western folk tale. Born on the other side of the United States to poor Irish parents, his parents indentured him in New York as a jeweler's apprentice. He escaped and stowed away on a river boat bound for Alabama. Sympathetic boat captains Hugh Monroe and Joe Holland discovered King, made him a “cabin cub,” and taught him the art of navigation and life on the river. At the onset of the Seminole War in Florida, he enlisted in the army but did not abandon his career on the river. Instead, he transported troops down river during the Seminole War and the Mexican War.

King entered business at the United States/Mexico border, and became a principal partner with his war buddy Mifflin Kenedy, in the steamboat firms of M. Kenedy & Company and King, Kenedy & Company. The firms dominated the Rio Grande and made the men a considerable amount of money. Diversifying his portfolio, King entered land speculation, railroads, and, like many Texas entrepreneurs, ranching.

King Ranch began after a formal land purchase in 1853. He and his wife, Henrietta originally settled in a mud and stick jacal, but eventually replaced it with a grand house overlooking Santa Gertrudis Creek. The ranch operated on the Hispanic legacy of patrón-peón "feudal" rule. Its foundation stock was in Long Horns, but included other grazing animals. Its breeding program produced the Santa Gertrudis cattle, which were more resistant to heat and disease making it an important Texas cattle breed. After King's death in 1885, Henrietta and her son-in-law Robert Justus Kleberg continued to expand its land holdings, reaching a size of 1,173,000 acres by 1925. The King Ranch still exists today and covers nearly 1,300 square miles, an area larger than the entire state of Rhode Island.