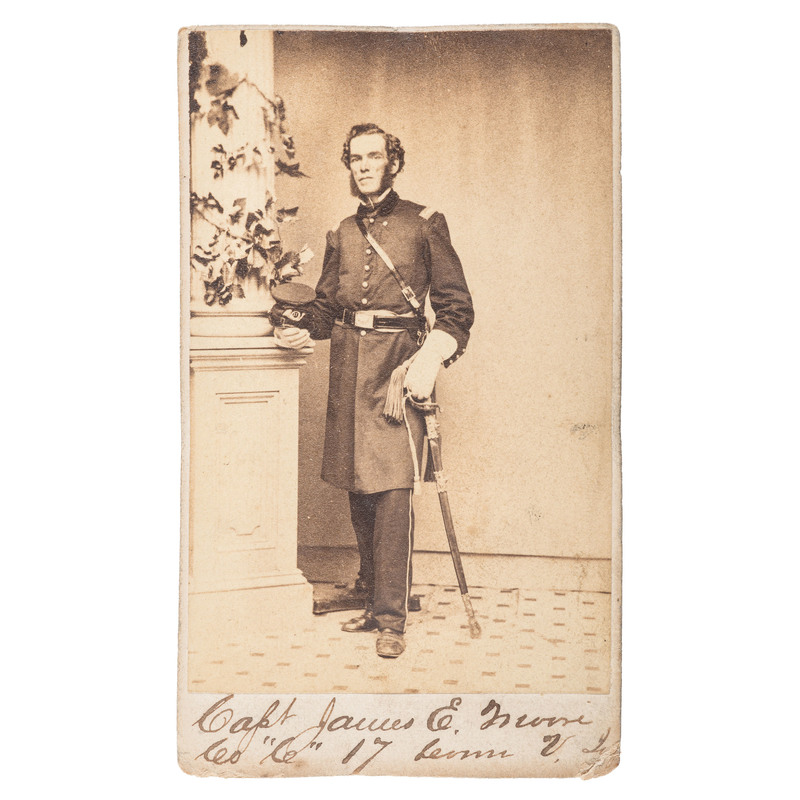 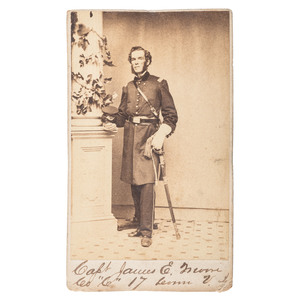 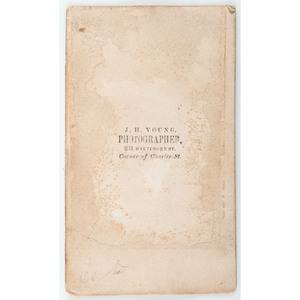 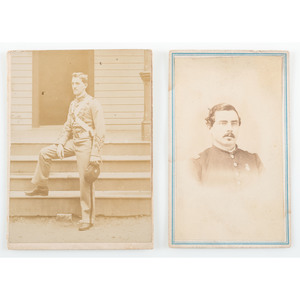 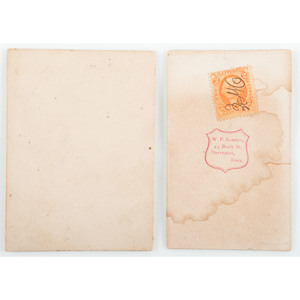 Lot of 3, featuring CDV of Captain James E. Moore, plus CDV of unidentified officer with W.P. Emery, Davenport, Iowa backmark, and post-war, full-length outdoor image of a young man in what appears to be a USMA (or other military school) cadet uniform, his breast plate with "A" and belt plate with "R."

Forming part of the 11th Corps at Gettysburg, the 17th Connecticut numbering 386 officers and men was rushed into the chaotic first days' fighting being almost immediately attacked and overwhelmed by General J.B. Gordon's Georgia brigade. It seems to have been in the frenzy of this battle, and the fall-back to Cemetery, that Captain Moore lost his life. The 17th CT suffered 198 men killed, wounded, and missing before retreating to Cemetery Hill. The regiment was transferred to the 10th Corps, Department of the South in August 1863 and subsequently fought at Fort Wagner during siege operations against Charleston.

The 17th Connecticut was formed during the summer of 1862, primarily of men from Fairfield County. Company C consisted of men primarily from Danbury. The regiment was mustered into Federal service at the end of August 1862. As the regiment headed out to connect with Gen. Sigel, they had to pass through Baltimore. They found the city on edge because of raids by rebel cavalry, so Gen. John Wool had them fortify the garrison at Fort Marshall. When little came of the threat, they requested to continue on their way to Sigel's Corps, which enraged Wool, who gave them less than 24 hours to leave Baltimore. They proceeded to Washington and were sent to Fort Kearney where they remained for a couple more weeks before finally meeting up with Sigel in Gainesville, VA. The 17th was assigned to the Second Brigade, First Division of Sigel's corps, along with the 25th, 55th, 75th and 107th Ohio and 157th New York. These men were together throughout the remainder of the war.

With Sigel's 1th Corps they marched to Fredericksburg, but were held in reserve. They spent most of the winter camped along the Potomac River and the railroad from Aquia Creek to Falmouth. In April they fought at Chancellorsville, their first real experience under fire. They were inactive until Lee began his advance north toward Gettysburg.

The 11th Corps reached the battlefield in mid-day on the first, and were sent to the extreme right. Overwhelmed, the 11th Corps retreated to Cemetery Hill. It seems to have been in the frenzy of this battle, and the fall-back to Cemetery, that Capt. Moore, along with Lieut. Col. Fowler, lost their lives. The 17th CT ended up posted to the northern foot of the hill, where it remained for the next two days of the battle. On the 6th it joined the rest of the army in pursuit of Lee's fleeing army, where it came close to the pickets and once even the breastworks, but never caught Lee's forces. It briefly rested to repair tattered clothing and equipment before heading for Folly Island, then Morris Island. It was under constant fire from the many forts in the harbor - Wagner, Moultrie, Johnson - as well as land-based batteries in Charleston. They even volunteered to make a night assault on Sumter, but the navy claimed that honor. The division remained on Folly Island until near the end of Feb. 1864.

It was then sent to Florida, where various segments of the Corps were scattered about - the 17th went to St. Augustine, the Ohio boys to Jacksonville, etc. The corps had a number of men captured and sent to Andersonville during this time - it seemed that any small group of Union soldiers moving between forts were picked off by rebel guerillas. It was mustered out at Hilton Head in July 1865.