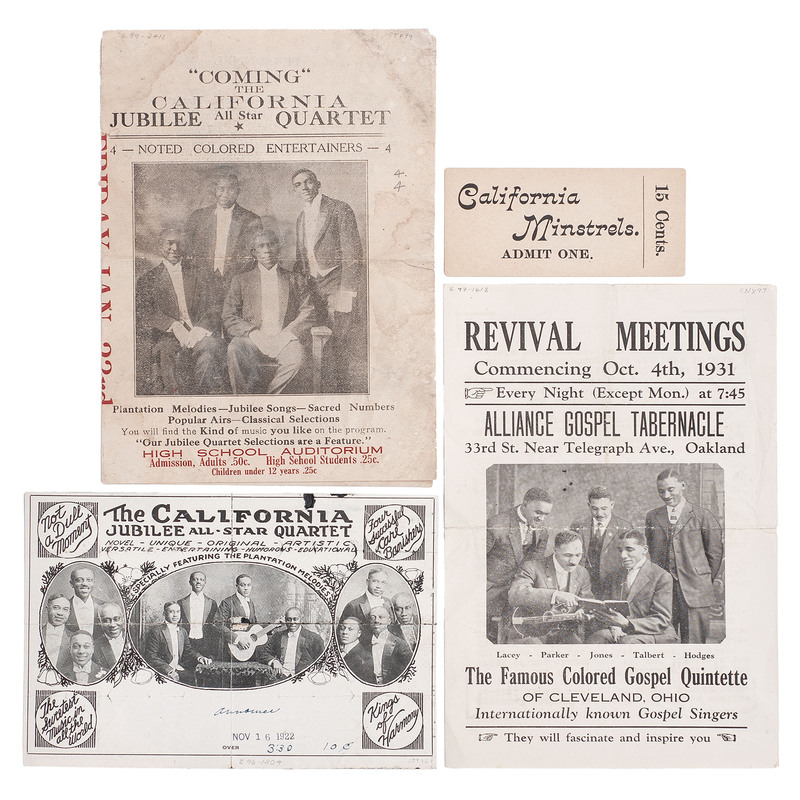 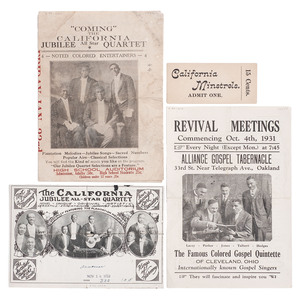 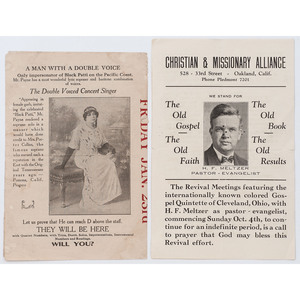 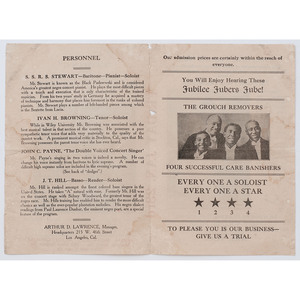 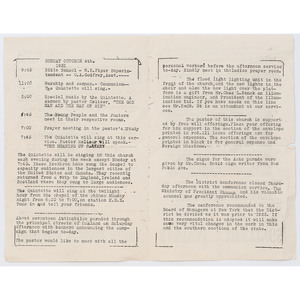 Promotional pamphlet, 5.5 x 8 in., 4pp, heralding a coming performance of "Noted Colored Entertainers" the "California Jubilee All Star Quartet." Includes short biographies of the four performers, S.S.R.S. Stewart, Ivan H. Browning, J.T. Hill, and John C. Payne. Payne, promoted as "The Double Voiced Concert Singer," was notable for his ability to change his voice from baritone to lyric soprano, a talent he utilized for his impersonation of American soprano Sissieretta Jones, aka "Black Patti" in reference to Italian opera singer Adelina Patti. Alongside a photographic image of Payne dressed as the opera singer, the pamphlet notes that the evening's performance would include Payne "appearing in female garb, imitating the celebrated 'Black Patti.'" Two additional photographic images appear in the pamphlet, both of the quartet in performance attire. Pamphlet likely dates to circa 1912.

Another promotional for the California Jubilee All Star Quartet, 6.75 x 4.75 in., features a trio of oval photographic images embellished with floral accents, each corner with an endorsement including "Kings of Harmony," "The Sweetest Music in all the World," "Not a Dull Moment," and "Four Successful Care Banishers." A handstamp indicates a date of November 16, 1922. The paper promotional was mounted on black cardstock at a later date which obscures verso.

Accompanied by a pamphlet, 5.5 x 8.5 in., 4pp, for an October 4, 1931, revival meeting held at the Alliance Gospel Tabernacle in Oakland, California. Revival meeting featured a performance of the "The Famous Colored Gospel Quintette" of Cleveland, Ohio. Interior of pamphlet states that "These Brethren have sung the Gospel to capacity audiences in the largest cities of the United States and Canada."