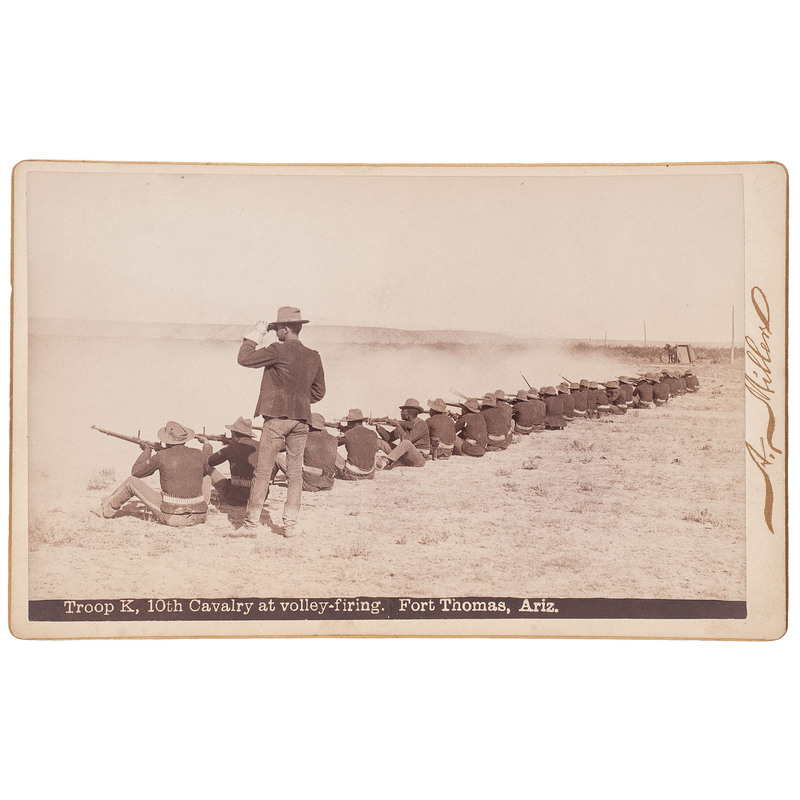 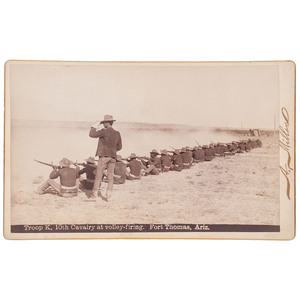 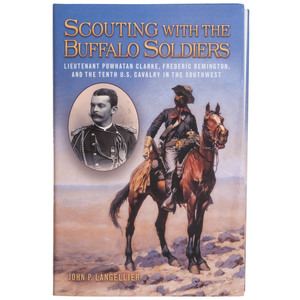 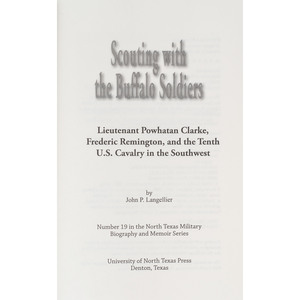 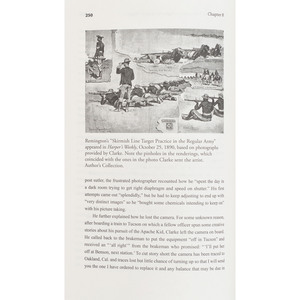 Congressional Medal of Honor recipient Powhatan H. Clarke is shown overseeing target practice at Fort Thomas, Arizona’s firing range—now an open expanse of desert on private ranch. Standing behind his men from Troop K, Tenth US Cavalry, the lieutenant peers through field glasses toward the targets to judge the accuracy of his command. Just to his left, a soldier blazes away with an experimental rifle Springfield “trapdoor” rifle-carbine. We are not aware of any other image that shows Buffalo Soldiers training with their weapons in such a realistic manner - members of the unit are practicing volley-firing, a military tactic of firing in unison that was designed to shock and rout the opposing troops.

An illustration by a then obscure, upcoming artist named Frederic Remington covered the front page of Harper’s Weekly August 21, 1886. The foundation for what might be considered to be the work that changed his life emerged from a trip to Arizona Territory. During a time when the US Army hotly pursued the illusive Apache leader, Geronimo, Remington set out to experience and capture these halcyon times.

Arguably the highlight of his Arizona adventure took place on June 10, 1886. On that day the roving reporter-illustrator recorded in his journal: “Got up late after a good night rest at Palace Hotel [Tucson] took camera went to the detachment of 10th Colored Cavalry—took a whole set of photographs.

At the Palace Remington met “Lieut Clark[e] … a young slim manly man” who in many ways the artist would come to consider as his military and frontier guide, as well as a kindred spirit. Remington wrote that the shavetail, Powhatan Henry Clarke, who had graduated dead last in his Class of 1884 at West Point, told the troop’s first sergeant, William H. Givens, “to do anything for me.”

During the course of Remington’s introduction to the black troops, whom he would come to call “Buffalo Soldiers,” he stood Givens to a brandy. Over drinks, the seasoned non-commissioned officer recounted to Remington “a gallant action by Lieut Clark[e] in rescuing Corp Scott who was shot through both legs, under fire—by going to the front and dragging him under cover—a man summoned accompanying him—bullets passed between his arms & legs as he stooped in the heroic act.” For his bravery in the face of death Clarke would receive the Medal of Honor.

Also, Clarke occasionally supplied more than words. Armed with his camera, or at times purchasing images from local photographers, Clarke sent Remington visual evidence of the daily life of troops serving on the West. Among these images was the example offered here, which features Clarke overseeing Troop K, 10th Cavalry engaged in target practice at Fort Thomas, Arizona.

In his latest book, Scouting the Buffalo Soldiers: Lieutenant Powhatan Clarke, Frederic Remington, and the Tenth US Cavalry on the Southwest, historian John Langellier contends the subject matter of this suburb sepia toned boudoir photograph was one of the images Clarke supplied Remington for his Harper’s Weekly October 5, 1890 rendering “Skirmish Line Target Practice in the Regular Army” (p. 250.) In addition to the photograph, a copy of the book is included with this lot. A boudoir photograph showing Buffalo Soldiers from the 10th Cavalry and Apache Scouts from a detachment Clarke commanded in operations to capture the Apache Kid and Massai was offered at Cowan's, February 2020, The Road West: The Steve Turner Collection of African Americana, Part I, Lot 38.