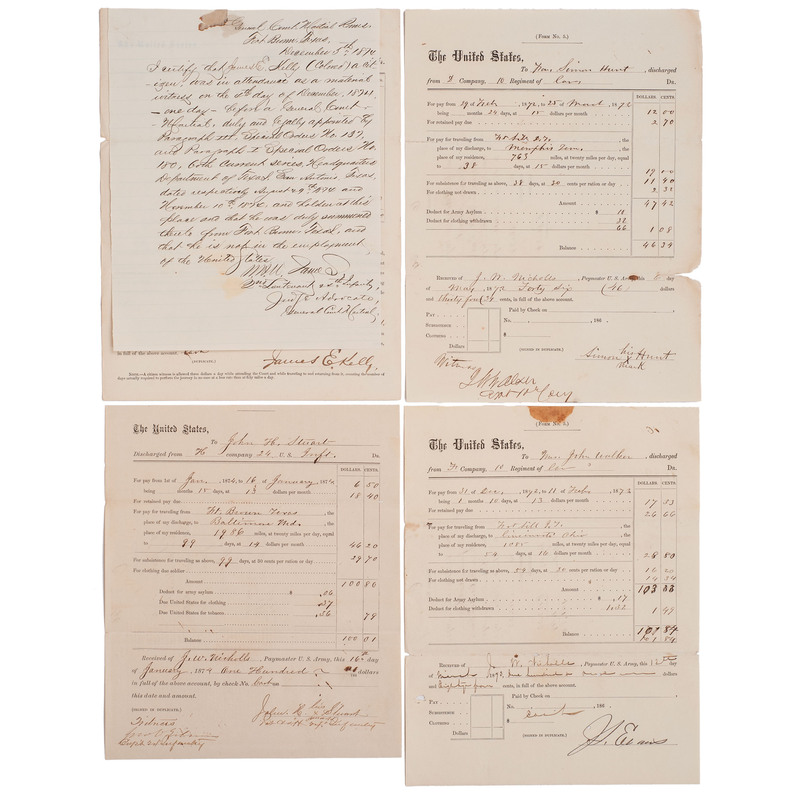 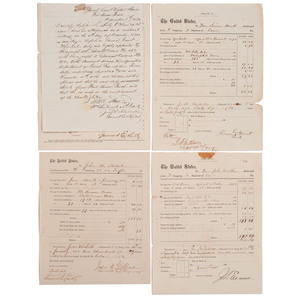 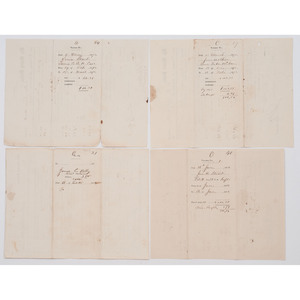 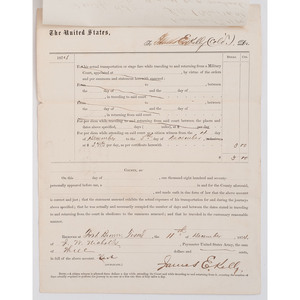 [BUFFALO SOLDIERS]. Group of 5 documents associated with the 10th US Cavalry and 24th US Infantry, comprising:

US Army Form No. 5 discharge document for farrier Simon Hunt, 10th US Cavalry, Company D. Fort Sill, Indian Territory (Oklahoma), 6 May 1872. 8 1/2 x 11 in. partly printed document (creases, small losses). Signed by Hunt by his mark, witnessed by Captain James W. Walsh. Simon Hunt was born in Georgia in 1851 and enlisted in the 10th US Cavalry on March 25, 1867, in Memphis, Tennessee. Captain James William Walsh was born in Ireland and served in the Regiment of Mounted Riflemen from 1850 to 1860. He was commissioned as Captain of the 3rd Pennsylvania Cavalry in 1862 and subsequently promoted to major and lieut. colonel. He was brevetted lieut. colonel of volunteers for “gallant and meritorious service during operations resulting in the fall of Richmond, Virginia, and the surrender of the insurgent army under Gen. R.E. Lee.” He was commissioned 2nd lieutenant in the 5th US Cavalry on May 4, 1866, and appointed Captain of the 10th Cavalry on July 28, 1866.

US Army Form No. 5 discharge document for musician John Walker, 10th US Cavalry, Company F. Fort Sil, Indian Territory, 12 March 1873. 8 1/2 x 10 3/4 in. partly printed document (creases, a few small losses, brown stain at top edge). Signed by post trader J.S. Evans acknowledging receipt of funds due to Walker, including his final pay and allowances and travel to Cincinnati, Ohio. John Walker was born in Kentucky in 1849 and enlisted in the 10th US Cavalry on February 11, 1868, at Cincinnati, Ohio, serving as a trumpeter in Company F. Walker signed over his claim to the $101.84 in pay and allowances due to him to Fort Sill post trader John S. Evans, who was also a licensed trader at the Kiowa Agency.

[US Army Form No. 5] discharge document for private John H. Stuart, 24th US Infantry, Company H. Fort Brown, TX, 16 January 1874. 8 1/2 x 10 in. partly printed document (creases, top edge trimmed). Signed by Stuart with his mark, witnessed by Captain John C. Gilmore. John H. Stuart, born in Calvert County, MD in 1851 and enlisted in the 24th US Infantry on January 2, 1871, in Baltimore. Captain John Curtis Gilmore was born in Canada, but with the outbreak of the Civil War, he was commissioned as Captain in the 16th New York Volunteer Infantry in May 1861 and promoted to Major in September 1862. He was mustered out in May 1863 and commissioned as a lieutenant colonel in the 193rd New York Volunteer Infantry. He was brevetted as Colonel of Volunteers on November 14, 1865, for “gallant and meritorious service during the War.” He entered the Regular Army as a 2nd lieutenant in the 12th Infantry in May 1866, transferring to the 30th Infantry in September 1866. He was promoted to captain in the 38th Infantry in January 1867 and transferred to the 24th Infantry in November 1869. He was subsequently promoted to major in August 1890 and lieutenant colonel in November 1896. With the outbreak of the Spanish-American War, Gilmore was appointed brigadier general of Volunteers in 1898. After the war, he served as colonel and assistant adjutant general and retired in 1901. Gilmore was recognized for conspicuous gallantry during the Civil War and was brevetted as a major for “gallant and meritorious service” at the Battle of Antietam and lieutenant colonel for “gallant and meritorious service” at the Battle of Fredericksburg. Gilmore was also awarded the Congressional Medal of Honor for “distinguished conduct” at the Battle of Salem Heights, Virginia, on 3 May 3 1863 for “seizing the colors of his regiment and gallantly rallying his men under a very severe fire of the enemy while serving as a Major of the 16th New York Infantry volunteers….”

US Army Form No. 13 1/2 Court Martial Service Citizen Witness. Fort Brown, TX, 11 December 1874. 8 1/2 x 11 in. partly printed document (creases). Listing the payment of expenses to "James E. Kelly (Colored)" of Brownsville, Texas as a citizen witness in a court martial at Fort Brown. Signed by Kelly acknowledging that he has been paid the amount of $3 by Major James Nicholls, US Army paymaster at Fort Brown. James E. Kelly, a citizen of Brownsville, Texas, was called in appear as a witness in a General Court Martial convened at Fort Brown December 4th through the 5th, 1874. The Court was convened by Special Order No. 137 and Special Order No. 180, of the Department of Texas, San Antonio under the authority of Brigadier General Christopher C. Augur. [With]: Autograph document signed ("W.H.W. James"). Fort Brown, TX, 5 November 1874. 7 1/2 x 9 1/2 in. (creases, light stains), attached at top edge to US Form 13 1/2. Signed by Lieutenant William Henry Williams James who writes certifying that “James E. Kelly (Colored) a citizen, was in attendance as a material witness on the 4th day of December 1874…before a General Court Martial….” James graduated from West Point in the class of 1872 and was assigned as a 2nd lieutenant in the 24th Infantry at Fort Brown. James was promoted to 1st lieutenant in 1878 and became regimental adjutant in 1879. He was promoted to captain in 1890 and major in 1899, transferring to the 23rd Infantry. He was promoted to lieut. colonel in 1902.