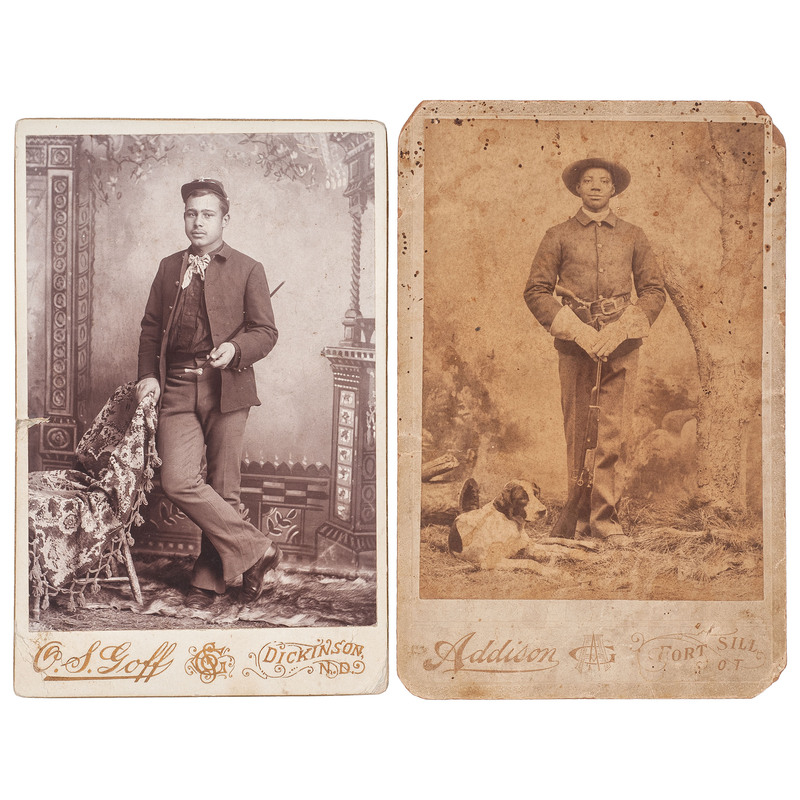 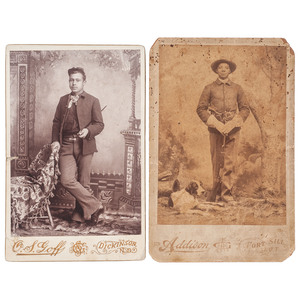 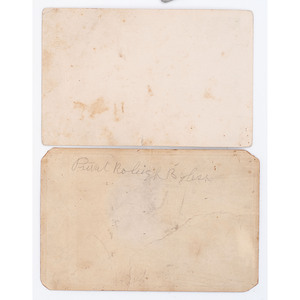 Cabinet card of a proud private of Troop H, 10th US Cavalry at Fort Buford, ND. Dickinson, ND: O.S. Goff, ca 1896. The subject dons a well-tailored garrison uniform with 1886-pattern forage cap. Although the piece of headgear is tilted back, the stamped brass 1872-pattern cavalry crossed saber insignia and brass regimental number "10" are evident. The tie is non-regulation while the dapper trooper has paid for extra ornamental stitching around the placard of his 1883-pattern pullover blue flannel campaign shirt. The unit arrived in 1892 at this post from Arizona, and noted photographer O.S. Goff took this studio full-length portrait prior to 1896 as the forage cap was replaced with a distinct new design in 1895. (corner/edge wear to mount including tear along left edge that extends into print, creased corners, soiling on verso).

[With]: Cabinet card of a young Buffalo Soldier from the 10th US Cavalry pencil identified on verso as "Private Raleigh B. Hess(?)." Fort Sill, Oklahoma Territory: Addison, ca 1899. The private wears much the same uniform as this regiment wore in Cuba during the Spanish-American War, where it participated in assaults on San Juan and Kettle Hills. He carries the .30-40 caliber Krag cavalry carbine and has staged his revolver for the photographer to emphasize he is ready for action. Gauntlets, a drab campaign hat, and dark blue wool 5-button blouse served him well while briefly posted in 1899 to Fort Sill, Indian Territory (Oklahoma) to watch over Apache prisoners of war held there, including Geronimo (toning and fading to print, scattered spotting, some creasing, corner loss to mount).

Following the Civil War, the United States Congress authorized the formation of two cavalry regiments and four infantry regiments (which were soon reduced to two) composed of African-American soldiers. These regiments, the 9th and 10th Cavalry and the 24th and 25th Infantry, were stationed throughout the West, including early on at Fort Sill, Indian Territory (Oklahoma). Thereafter they saw action in countless battles and skirmishes during the Indian Wars, the Spanish-American War, the Philippine Insurrection, and the raids against Pancho Villa. They built forts, escorted wagon trains, mail stages, and railroad crews, drew maps, located sources of water, and were largely responsible for opening millions of square miles of western land to settlement. Twenty of these stalwart black soldiers received Congressional Medals of Honor. Among their diverse deployments from Cuba where they played a major role on the assault of San Juan and Kettle Hills alongside the Forts Volunteer Cavalry (Rough Riders), which gained them laurels as well as helped usher in Theodore Roosevelt to the US Presidency. Shortly after their return to the United States, these so-called Buffalo Soldiers scattered to posts in the American West. In fact, for a short time one troop of the 10th Cavalry took up station as their old home base, Fort Sill, where, as the Boston Daily Advertiser reported in early 1899 as guards for Apache prisoners of war held there including Geronimo.