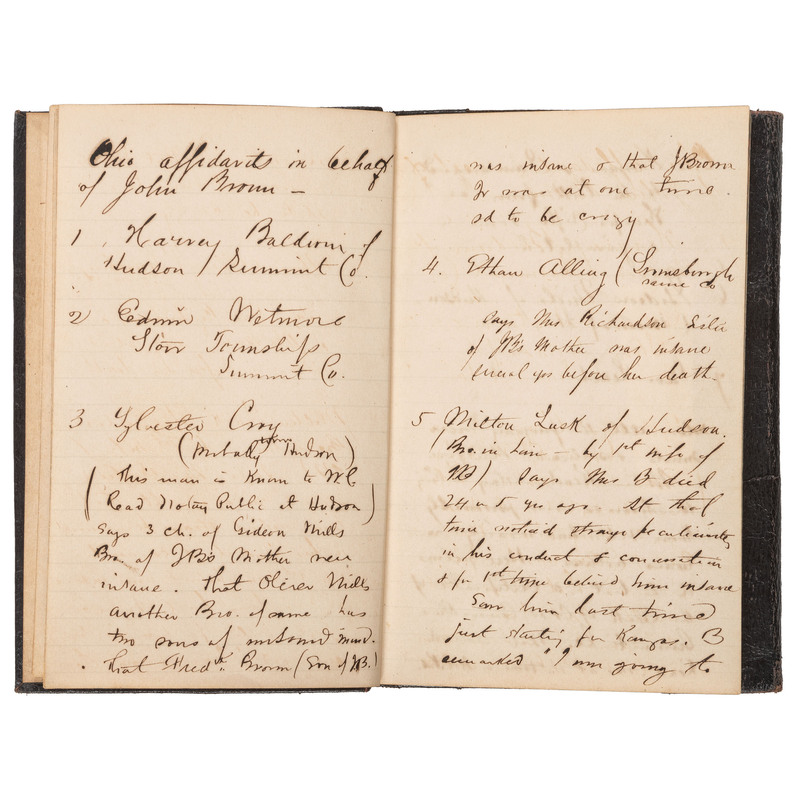 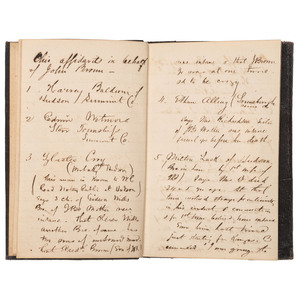 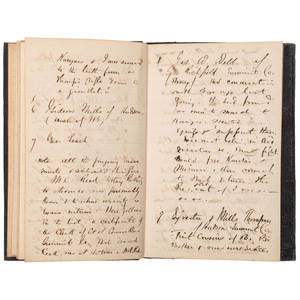 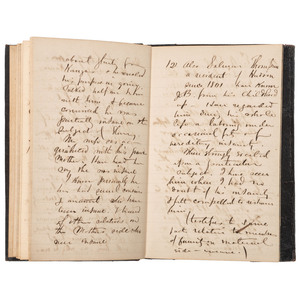 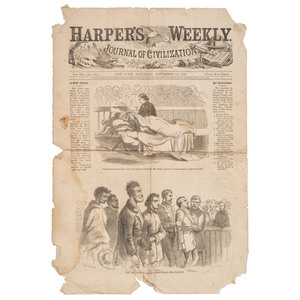 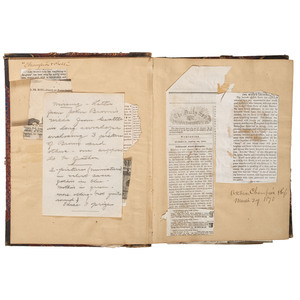 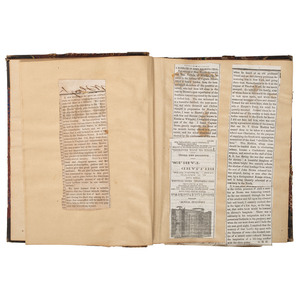 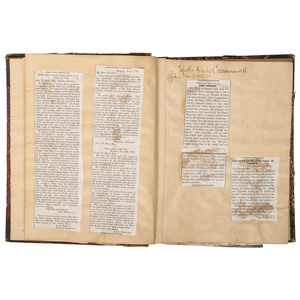 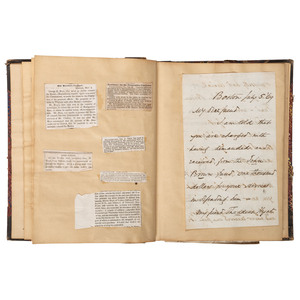 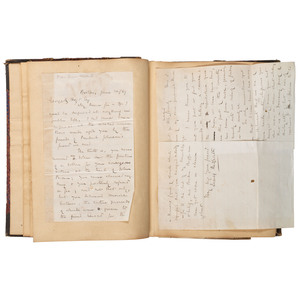 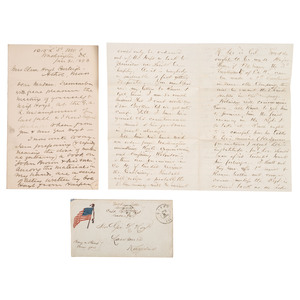 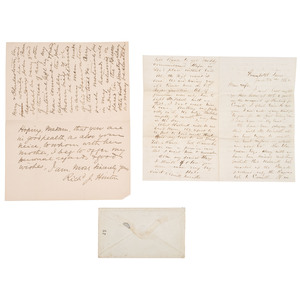 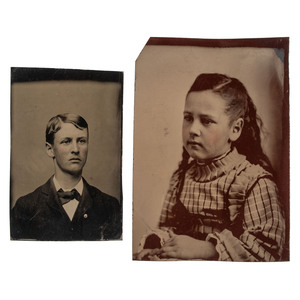 3 7/8 x 5 5/8 in. leather bound journal (1 1/4 in. tear in leather flap, wear to leather surface). 28 pages feature writing in Hoyt's hand, of which 21 contain "Ohio affidavits in [sic] behalf of John Brown." Testimonies range from single sentences to multiple pages, attesting to the insanity of Brown and his family members. The final written page contains a list of names of conspirators in the raid on Harper's Ferry along with their respective fates, including "J Brown -  Hung" and "Owen, escaped."

GEORGE H. HOYT became involved in John Brown's trial when working as an attorney in Boston. Some sources say that abolitionists in the city sent him to join Brown's defense team, while others report that his main mission was to help devise a plan of escape for the prisoner. Regardless of his true intent, the 21-year-old abolitionist arrived at the county courthouse in Charles Town, WV on 28 October 1859, the third day of the trial, and was sworn in as counsel for the defense. After the resignation of Brown's appointed attorneys, Hoyt was joined by experienced lawyers Samuel Chilton and Hiram Griswold, who were admitted the following day.

While it is unclear whether the evidence was presented during the trial or after, in seeking an appeal, Hoyt recorded affidavits from Brown's former neighbors and relatives residing in and around Akron, OH in support of an insanity defense. Many of the witnesses reported knowledge of people in Brown's family having been insane, while others remembered specific conversations with Brown in which he appeared to be disturbed. In his journal, Hoyt recorded the following encounter between Brown and his former brother-in-law, Milton Lusk of Hudson, OH: "Mrs. B died 24 or 5 yrs ago. At that time noticed stranger peculiarities in his [Brown's] conduct of conversation & for 1st time believed him insane. Saw him last time just starting for Kansas. B remarked 'I am going to Kansas & I am armed to the teeth from a Sharp's rifle down to a gimlet.'" Another recorded account from one of Brown's neighbors, Daniel D. King, reads, in part: "...became convinced he was crazy on the subject of slavery. He was armed to the teeth & remarked 'he was instrument in the hands of God to free the slave.'" During the trial, Brown harshly objected to the idea of an insanity plea, and his counsel had to devise another strategy to persuade the jury not to convict him. In the end, they were unsuccessful, and Brown was executed on 2 December 1859.

Through Hoyt's work on the Brown case, he developed a close relationship with Brown's son and namesake, John Brown, Jr. Their friendship is made evident in the letters Hoyt received from Brown even years after the trial, in which Brown detailed how glad he and his family would be "to receive a visit from yourself, Mrs. Hoyt and the children." The two served in the Civil War together under prominent Kansas General Charles "Doc" Jennison, in the 7th Kansas Cavalry regiment, also known as "Jennison's Jayhawkers." It is from his position as captain of Company K of this regiment that Hoyt wrote to his wife on 30 June 1862, revealing that his abolitionist views had remained firm: "We have been playing the devil with Mr. Mitchell who has been trying to make us hunt negroes - which we won't do."

After the Civil War, Hoyt served as Kansas Attorney General from 1867-1869. It was just after he left office that rumors circulated accusing him of receiving compensation for his work on the Brown case. This appeared to deeply trouble Hoyt, as he wrote asking colleagues and friends, including Brown, Jr., to counter these claims. In Brown's second letter to Hoyt, dated 25 June 1869, Brown obliged, and signed a statement dismissing the claims and affirming Hoyt's pro-bono work, countersigned by Brown's brother, Jason Brown, and sister, Ruth B. Thompson. Several other parties, including noted abolitionists James Redpath and Wendell Phillips, and John Brown biographer Richard Hinton, wrote letters in Hoyt's defense. Phillips, who was in charge of funds raised for John Brown, wrote: "We never paid you one dollar...Your services to John Brown were, as we all know, freely given...." Many of these letters were published in the Topeka Daily Commonwealth to refute the charges against Hoyt. See CASKIE, George E. "The Trials of John Brown." In: The Annals of Iowa, Vol. 9. 1910.

A RARE AND REMARKABLE ARCHIVE THAT SHEDS NEW LIGHT ON THE HISTORIC JOHN BROWN TRIAL, GEORGE H. HOYT'S PARTICPATION IN THE CIVIL WAR, AND THE ABOLITIONIST MOVEMENT.