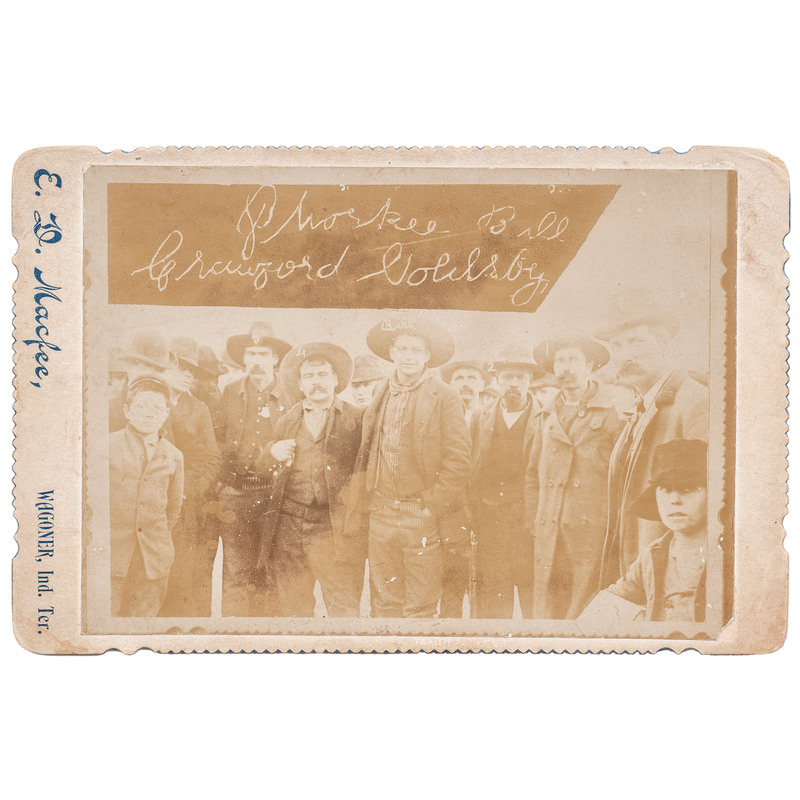 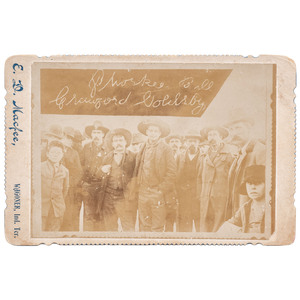 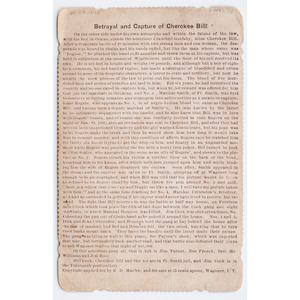 Cabinet card featuring Crawford "Cherokee Bill" Goldsby and the US Deputy Marshals responsible for capturing him, taken moments before Goldsby tried to escape. E.D. Macfee: Wagoner, Indian Territory (Oklahoma), n.d., [1895]. Imprint on recto, and printed story of capture on verso. Image with Goldsby's signature and identification numbers written in the negative above subjets. Included in the image are US Deputy Marshal Bill Smith, Deputy Marshal Isaac Rogers, Clint Scales, Deputy Marshal Dick Critendon, and Deputy Marshal Zeke Critendon. Story featured on verso, titled "Betrayal and Capture of Cherokee Bill!" reads, in part, "After a desperate battle of 30 minutes with two strong men and one woman; the desperado was bound in chains and his hands cuffed, but like the man whose name was 'Legion,' he plucked the hand cuffs asunder and threw them at his captors, but was held in subjection at the muzzle of Winchesters until the door of his cell received its own."

Crawford Goldsby's (1876-1896) father, George Goldsby, had served as a Buffalo Soldier in the 10th Cavalry Regiment, being promoted to sergeant major in 1872, four years before Crawford was born. His mother was a Cherokee freedman of mixed African, Indian, and white heritage. Crawford himself was sent to Indian school in Cherokee, Kansas at the age of seven, to return home to Fort Gibson at the age of twelve. It was during this period at home that he began to develop some habits that foreshadowed his life of crime, including drinking alcohol, rebelling against authority, and associating with less-than-reputable personalities.

He began his crime spree at the age of 18 when he shot a man over a dispute with Goldsby's younger brother. When confronted by lawman outside of Tahlequah, Oklahoma, he shot and killed a deputy by the name of Sequoyah Houston. A cold-blooded killer, he joined another outlaw, Bill Cook, and formed the Cook Gang that terrorized Indian Territory for two years. He was finally caught during a robbery and turned over to the authorities. After failing to escape prison and the death sentence, he was hanged on March 17, 1896, in front of hundreds of spectators. Allegedly, when asked if he had any last words the 20-year-old said, "I came here to die, not make a speech."