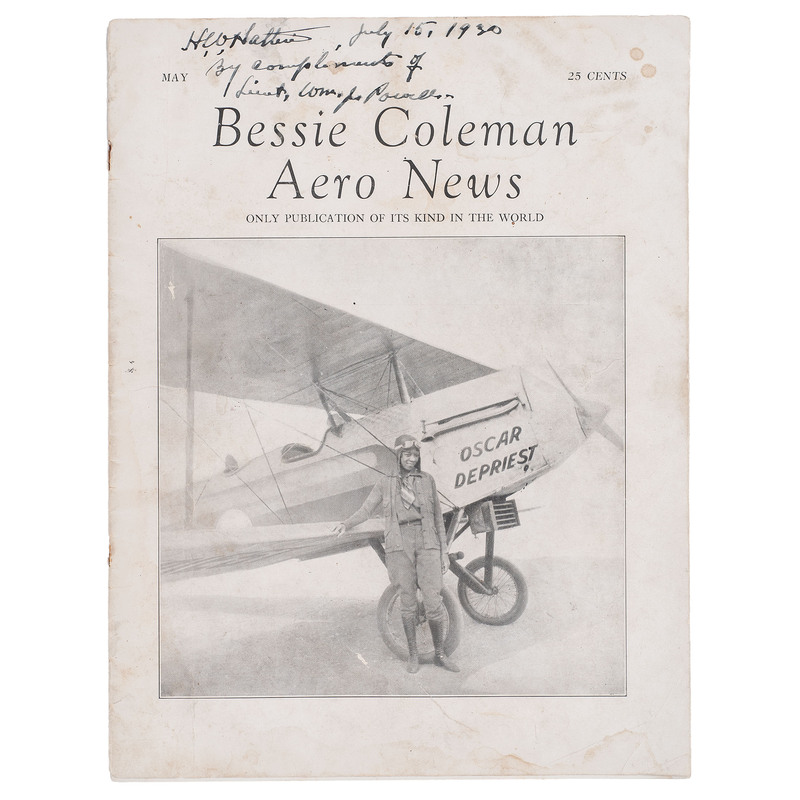 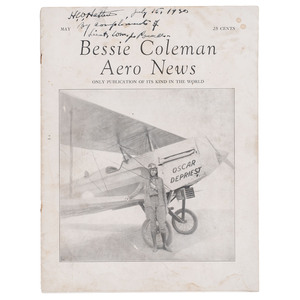 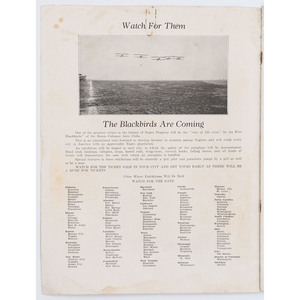 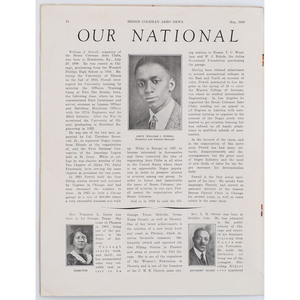 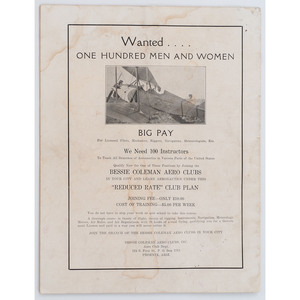 William J. Powell (1897–1942) grew up in a middle-class African American neighborhood in Chicago before serving in World War I and earning a degree in electrical engineering. He then opened several successful automobile service stations, but inspired by Lindbergh’s transatlantic flight, decided he wanted to learn to fly. After being rejected from numerous flight schools because he was Black, Powell moved to Los Angeles where he gained admission to a flying school. By the early 1930s he had organized the Bessie Coleman Aero Club to promote aviation awareness in the Black community and named it after the pioneering African American aviatrix who had envisioned opening an aviation school for African Americans before her untimely death in 1926. Powell organized the first all-African American air show in 1931; he published the Bessie Coleman Aero News, and in 1934, he authored Black Wings, a fictional account of his own life [sold as Lot 52 in Part I of The Road West].

The cover image is of aviatrix Marie Dickerson (1906-1993) standing in front of the Oscar De Priest biplane. The plane was christened by Susan Hancock, an investor in Bessie Coleman Aero and Booker T. Washington's mother-in-law, in honor of Illinois representative Oscar S. De Priest (1871-1951), the first African American to be elected to Congress in the 20th century and the first to be elected from a northern state. In each of his three terms, he was the only African American serving in Congress. He was a member of the Aero Club and visited Los Angeles in 1929 and was treated to a flight in the eponymous plane. An image of De Priest posing in front of the biplane is housed in the White House Historical Association.

Powell was an enthusiastic advocate, anticipating a future where African Americans were the nation's leaders in aviation. On page 5, Lieut. Powell address "the Negro Youth of America," encouraging them to consider aviation: "Today, another great industry is just beginning - aviation - and there is more than a job and a future for you in aviation. There is a better job and a better future for you in aviation than in any other industry."

Exceedingly scarce, OCLC locates no copies, no records of any copies ever selling at auction, and only one copy located at the Mark E. Mitchell Collection of African American History.