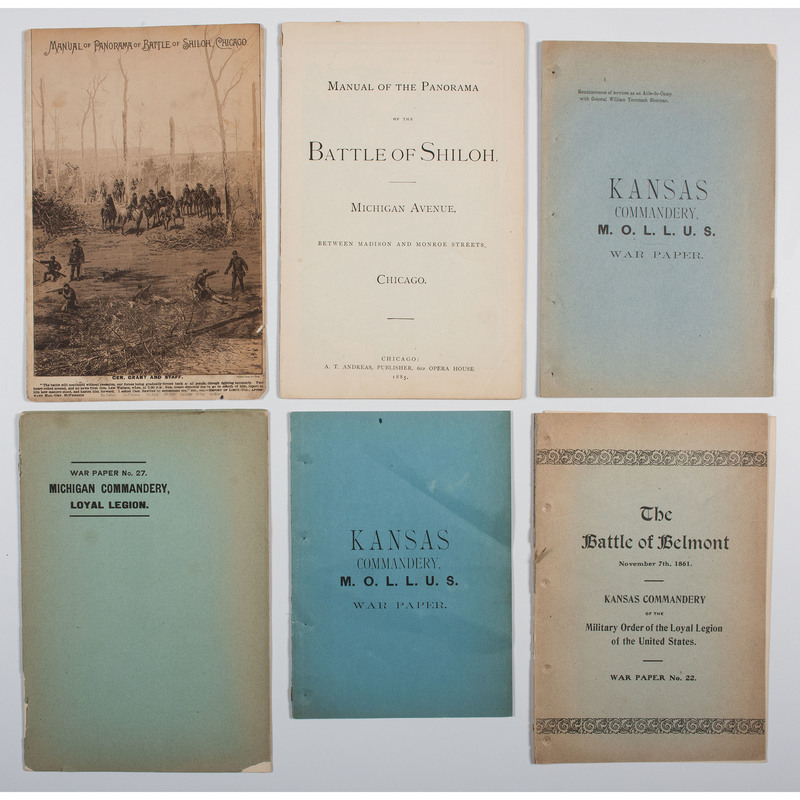 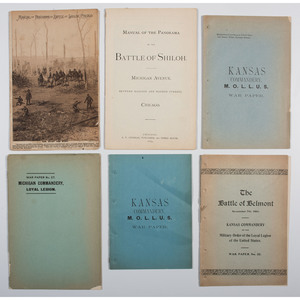 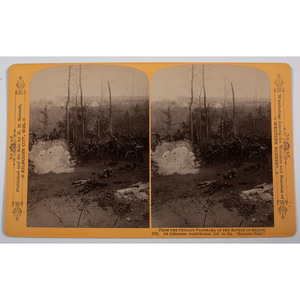 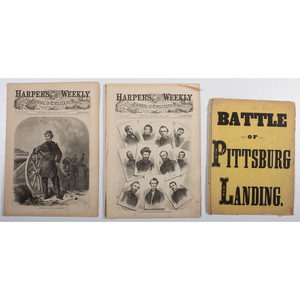 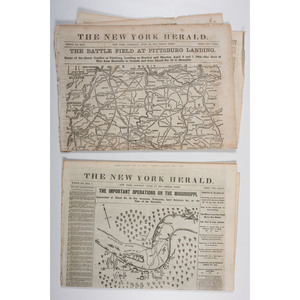 Battle of Shiloh Collection of Booklets, Imprints, Newspapers and More, Lot of 12

The Daily Telegraph. London, England: April 24, 1862. No. 2132. 8pp. Approx. 17 x 23.5 in. British newspaper announcing the “Battle Near Corinth. / [and the] Capture of Vessels By The / Merrimac.” Inside pages reproduce a telegram dispatched on April 11, 1862 concerning the Battle of Pittsburg Landing: “. . . after the second day’s fight, the Confederates fell slowly back, keeping up a fire of artillery as they retreated. The Confederates were driven beyond the Federal lines and pursued by cavalry. The loss of Federal officers was very large.” Additional reports indicate that “a fierce civil war is raging in the interior counties of Tennessee, between the Union men and the Secessionists. Neighbours were daily killing each other in casual rencontres.” Later telegrams detail the Battle of Hampton Roads, with descriptions of the engagement between the two key naval vessels: “The Merrimac, with several gunboats and tugs. . . captured three small vessels. . . and the Monitor fired four shots at the Merrimac.” Also with commercial intelligence, including British trade implications. Brittleness and creasing as expected, with some small tears at edges and fold lines. Larger rips/tears and discoloration to front cover.

Harper’s Weekly. A Journal of Civilization. New York, NY: April 26, 1862. Vol. 6, No. 278. Cover features full-length standing portrait of Major General Halleck standing beside a cannon in the field, holding a pair of binoculars. Brittleness and spotting, with several small tears at binding. Inside illustrations depict Big Bethel and its fortifications and the initial attack at Yorktown, both as rendered by an officer of the Topographical Engineers, as well as sketches of the Battle of Pittsburg Landing, engagements at Island No. 10, and a view of Fredericksburg, Virginia. Cartoon on back page presents a satirical interpretation of the conflict between Commodore Foote and General Beauregard, captioned, “Commodore Foote’s Game of Ten Pins with Beauregard.”

Harper’s Weekly. A Journal of Civilization. New York, NY: May 3, 1862. Vol. 6, No. 279. Cover features an assemblage of bust-length portraits of relevant officers in uniform, including Sherman, Nelson, Prentiss, Crittenden, Sweeny, Grant, Buell, Rousseau, McClernand, Wallace, and McCook, captioned “The Heroes of the Battle of Pittsburg Landing,” with inside pages containing biographical accounts of the aforementioned figures, as well as full-page illustrations of General Buell’s army crossing the Duck River, the Merrimac at Fortress Monroe, camp scenes at Yorktown, the bombardment and capture of Fort Pulaski, Island No. 10 after the surrender, and a map showing the position of General McClellan’s Army, many of which were sketched by soldiers. Brittleness and tearing along binding, with front page fully separated.

The New York Herald. New York, NY: April 10, 1862. No. 9344. 12pp, 16 x 22 in. Triple sheet newspaper with front page coverage of “the Great Conflict at Pittsburg Landing,” with large map illustrating “The Seat of War from Nashville to Corinth and from Island No. 10 to Memphis.” Particulars of the Battle detailed extensively on inside pages, with additional renderings of “The Scene of the Battle,” the “Rebel Works at Yorktown,” and the “Rebel Position at Lee’s Mill, Near Yorktown.” Includes day by day accounts of the “greatest and bloodiest battle of modern days,” with riveting descriptions of the “immense. . . slaughter on both sides” and the unparalleled “gallantry and bearing of [Union] officers.” Provides biographical sketches of key officers including Halleck, Sherman, Nelson, Crittenden, Beauregard, and Breckenridge, as well as a listing of killed and wounded Union officers. Later pages record the movement and advance of each corps, April 3—9, 1862. Brittleness, creasing, and foxing. Front page almost completely separated along vertical fold line.

The New York Herald. New York, NY: April 15, 1862. No. 9349. 12pp, 16 x 22 in. Triple sheet newspaper with front page announcing the “Important Operations on the Mississippi,” including important details of the Confederate surrender at Island No. 10 and New Madrid. Features an illustrated map of the Island, noting the locations of gunboats, transports, and land batteries at the time of surrender, as well as reports from field correspondents present at the Siege of Yorktown. Brittleness and toning, with some areas of tearing/loss.

Collection of 4 War Papers read before various state commandery groups, as part of the Military Order of the Loyal Legion of the United States, each 16-19pp and between 5.25 x 7.5 in. and 6 x 9.125 in., concerning topics of the Battle of Belmont, the Battle of Shiloh, and the personal reminiscences from William Tecumseh Sherman’s Aide-de-Camp. Brittleness with some separation to covers.