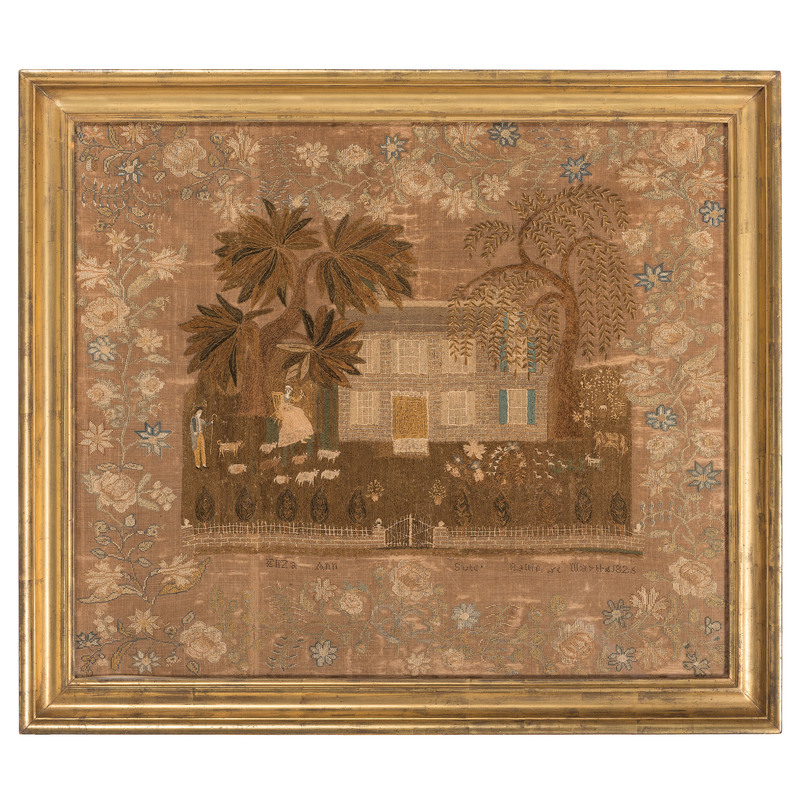 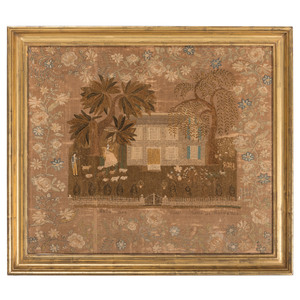 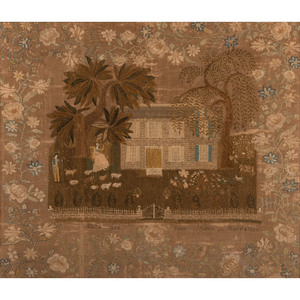 American (Maryland), 1826. A large needlework sampler in silk and chenille threads on linen ground with an all-around border of roses and other vining flowers, a blue bowknot centered in the lower border, surrounding a "busy yard" scene of a large two-story brick home with blue shutters on the windows at the side of the house and tan shutters on the front windows, the house flanked by a palm tree on the left and weeping willow on the right, a male shepherd and his dog and a seated lady with a parrot on her arm below the palm tree, the yard filled with grazing sheep, fowl, cows, and other farm animals, as well as flowers and bushes, the front of the yard bordered by a fence rising from a brick wall, signed beneath yard scene Eliza Ann Suter / framed; 31 x 36 in. (sight), 36.75 x 41.75 in. (frame).

This sampler was illustrated in Gloria Seaman Allen's 2007 publication A Maryland Sampling: Girlhood Embroidery 1738-1860 (page 213). Allen's research found that Eliza Ann Suter likely lived in Baltimore's Old Town area and that Suter's sampler shows a nearly identical scene to that of Mary Davis's sampler, illustrated in Betty Ring's Girlhood Embroidery: American Samplers and Pictorial Needlework, 1650-1850, Volume II (page 510, figure 567) and in the collection of the Metropolitan Museum of Art (1984.331.10). Davis completed her sampler in March of 1826 and Suter completed hers just three months later in May. Both works feature the same house and similar yard scenes with subtle differences such as Davis's home having two dormers emerging from the roof and the palm tree on the right and weeping willow on the left. Both girls used the same floral border with a blue bowknot at the center of the lower border, which Ring notes, is also found on a sampler signed by Elizabeth Ireland and dated 1819 (illustrated on page 508, figure 564). Most importantly, Ireland identifies her instructress on her sampler, Mrs. Lyman. Ring's research points to Eleanor Ricks Lyman, who married Joseph Lyman in 1799 but was widowed just sixteen days later. Lyman is listed in an 1814-1815 directory as a schoolmistress on Montgomery Street, and although it is unknown when she stopped teaching, related samplers suggest that she continued to teach into the 1830s.  Ring links two other samplers (figures 568 & 569) to Lyman, but undoubtedly Suter's needlework, as well as that of Ann Elizabeth Tuxworth (illustrated in Allen, pp. 211-213), discovered after Ring's work was published, can also be added to this particular group of Baltimore building samplers that reflected the prosperity of early 19th-century Baltimore. Many of these design motifs, such as the bowknot and floral wreaths, would later influence Baltimore album quilt designs.

Provenance:Descended in a Baltimore Family before coming into the possession of the current consignor.