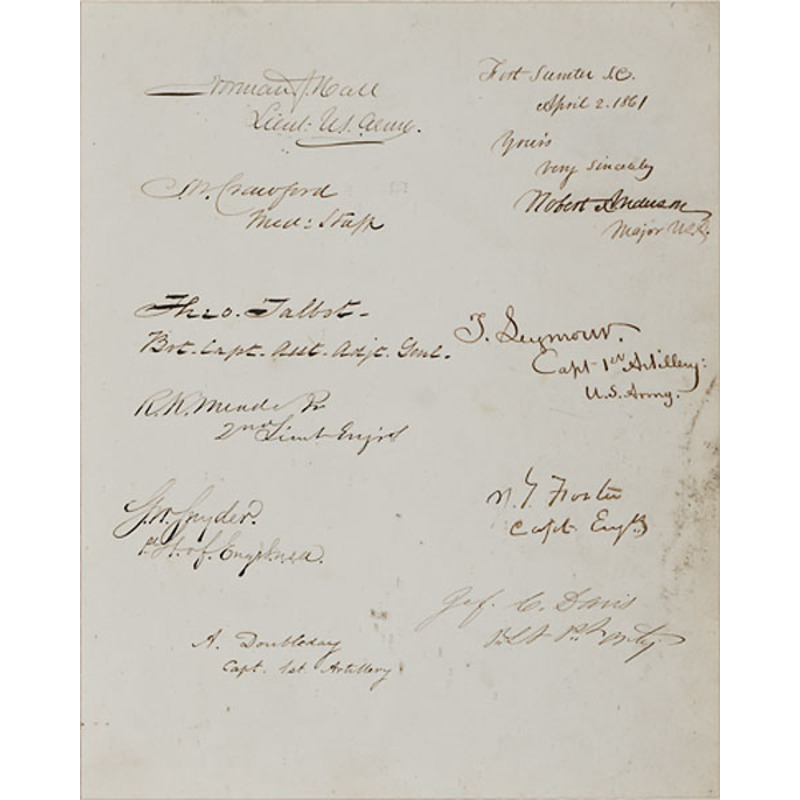 1p, 8 x 10 in. sheet with signature and rank of ten officers at Fort Sumter, signed on or about 2 Apr. 1861. This is the staff on duty when the fort was bombarded the following week by Confederate and South Carolina forces. By April 6, Capt. Talbot was back in Washington, so his signature was most likely acquired before this, although Talbot would return to Charleston with Lincoln's message that the fort would be resupplied, he was not allowed to return to the fort or communicate with Major Anderson.

Major Robert Anderson moved his companies of the 1st U.S. Artillery from the indefensible Fort Moultrie to the unfinished Fort Sumter in Charleston Harbor on Dec. 26, 1860. South Carolina had seceded six days earlier and Anderson was rightly concerned that the state would take possession of all military installations within its borders. The force was ill-equipped. They did not have all of their arms, very little ammunition, and they were running out of food, partly because of a military "downsizing" undertaken by President Buchanan. Over the next months, Governor Pickins and General G.T Beauregard requested the abandonment of the fort (in part to "save face," rather than surrender it).

Major Anderson repeatedly requested instructions from Washington, but, in part because of the change in administration, nothing was forthcoming. When Lincoln took office on March 4, 1861, he was soon made aware of the situation in Charleston. From the State Department, William Seward advised against provisioning the fort, if it were even possible to do so peacefully. Lincoln decided to try to resupply them with troops on a civilian steamer, but the Star of the West was fired upon (actually some maintain the first shots of the war).

Anderson kept reminding Beauregard that the fort would run out of food on 15 April, and he was waiting until then for instructions. Finally, on 11 April 1861, General Beauregard sent his aides with a message to Major Anderson: Sir: The Government of the Confederate States has hitherto forborne from any hostile demonstration against Fort Sumter, in the hope that the Government of the United States, with a view to the amicable adjustment of all questions between the two Governments, and to avert the calamities of war, would voluntarily evacuate it. There was reason at one time to believe that such would be the course pursued by the Government of the United States, and under that impression my Government has refrained from making any demand for the surrender of the fort. But the Confederate States can no longer delay assuming actual possession of a fortification commanding the entrance of one of their harbors....I am ordered by the Government of the Confederate States to demand the evacuation of Fort Sumter....All proper facilities will be afforded for the removal of yourself and comand, together with company arms and property, and all private property, to any post in the United States which you may selsct. The flag which you have upheld so long ... may be saluted by you on taking it down....

Major Anderson acknowledged the message, but replied ...I regret that my sense of honor, and of my obligations to my Government, prevent my compliance. He also apparently told Beauregard's aides that he would soon run out of food, anyway. Beauregard acknowledged the verbal communication, and requested more information. If you will state the time at which you will evacuate Fort Sumter, and agree that in the mean time you will not use your guns against us unless ours shall be employed against Fort Sumter, we will abstain from opening fire upon you.

Major Anderson gave Beauregard very specific information: ...cordially uniting with you in the desire to avoid the useless effusion of blood, I will, if provided with the proper and necessary means of transportation, evacuate Fort Sumter by noon on the 15th..., and not fire upon South Carolina forces. However, within only hours, in a message stamped 3:20 a.m. on April 12, By authority of Brigadier-General Beauregard, ...we have the honor to notify you that he will open the fire of his batteries on Fort Sumter in one hour from this time. And at 4:30 a.m. that is exactly what Beauregard did, in spite of his messages of the previous few days, and the Civil War had begun.

During the "wait," without supplies, the men seem to have had some time on their hands. A few of the reports in the OR's during this period mention days on end of fog. Apparently one soldier decided to use that "down time" to get the signatures of the officers at the fort. The signatures are in two columns. The first with:

Norman J. Hall, Lieut. U.S. Army. After the surrender of Fort Sumter, he went home to recruit and received a commission as colonel of the 7th Michigan VI. Hall led the 7th Michigan at Second Manassas and in the Maryland campaign. His unit suffered 60% casualties at Antietam, and he lost over 200 men defending Cemetery Ridge at Gettysburg, and the unit was instrumental in holding against "Pickett's Charge." He was cited for gallantry at Antietam, Fredericksburg, and Gettysburg.

S.W. Crawford, Med. Staff. Crawford was the surgeon at Fort Sumter during the bombardment. A month after the surrender, he left the medical corps and accepted a commission in the 13th U.S. Infantry. In 1862 Crawford was promoted to Brig. Genl. Vols. and saw action in the Northern Virginia Campaign, and at Antietam and Gettysburg among others.

Theo. Talbot, Bvt. Capt. Asst. Adj. Genl. Talbot accompanied Fremont on his second and third expeditions, the former at the tender age of 18. Combat was finished by the time Talbot arrived in Mexico in 1848, but he spent several months there in clean up operations. Within the year he was assigned to Oregon, where he remained for three years. He held various duties until 1860 when he was assigned to Fort Moultrie. He was nominated Asst. AAG in Feb. 1861, and was a courier taking messages between Fort Sumter and Washington during the lead-up to the bombardment. A year later he was dead of tuberculosis.

R.K. Meade Jr., 2nd Lieut Engrs. From a "connected" Virginia family, Richard Kidder Meade Jr. was a graduate of USMA (1853) and assigned to the engineering corps. After the fall of Fort Sumter, he resigned from the U.S. Army and accepted a commission as Major in the Confederate forces. According to Heitman, he died 31 July 1862.

G.W. Snyder, 2nd Lt. of Engrs USA. George W. Snyder was an 1856 USMA graduate, also assigned to the Engineers corps. He was in charge of the evacuation of Fort Moultrie to Sumter. After the fall of Fort Sumter he returned north still serving as an engineer. He saw action at first Manassas, but did not live to see much more of the war. Snyder died of disease in Nov. 1861.

A. Doubleday, Capt. 1st Artillery. Abner Doubleday was an 1842 USMA graduate, receiving a commission as 2nd Lieut in the artillery. He served in the Mexican War and Seminole Wars before his assignment to Fort Moultrie in 1858. He was second in command at Fort Sumter, and being a captain of artillery, is credited with firing the first return shot after Beauregard's forces fired on the fort. He did see combat at Antietam and Gettysburg, but was removed from field command after the latter. He spent most of the war in Washington, and rode with Lincoln to Gettysburg for the dedication of the battlefield. After the war, Doubleday received a patent for a cable car that still operates there, but had nothing to do with the development of baseball, in spite of cultural myths to that effect, nor did he ever make such a claim.

The only dated signature is that of the fort commander. The signature in the upper right column: Fort Sumter, Apr. 2, 1861, Yours, Very sincerely, Robert Anderson, Major USA. Anderson graduated USMA in 1825 and was commissioned 2nd Lieut. in the 3rd Artillery. He served in various regions and conflicts, including the Black Hawk War, Mexican War, and Florida, before being assigned to command the troops at Fort Moultrie in 1860. For his services at Fort Sumter, he was appointed Brig. Genl. Failing health forced his retirement from active service in 1863, but he was still active in organizing the soldiers' home in Washington, which sheltered thousands of veterans. Ironically, Anderson was Beauregard's artillery instructor at West Point, and the latter became Anderson's assistant after graduation (1838).

T. Seymour, Capt. 1st Artillery, US Army. Truman Seymour graduated from USMA in 1846, just in time for the Mexican War. He also spent time fighting the Seminoles in Florida before being sent to Fort Sumter. He remained in service during the war, serving in the Peninsula Campaign, and fighting at Mechanicsville, Gaines' Mill, Malvern Hill, second Manassas, South Mountain, and Antietam before transferring to the Department of the South. After the disastrous battle of Olustee, he returned north in time for the Wilderness battles, Petersburg, and he was present at Appomattox Court House for Lee's surrender.

J.G. Foster, Capt. Engrs. John Foster also graduated USMA in 1946, and served as an engineer in the Mexican War. In 1858 he was assigned to the construction of Fort Sumter in Charleston Harbor. In October of 1861 he was appointed Brig. Genl. Vols. and served with Burnside in North Carolina. He assumed command when Burnside was transferred to Virginia, and promoted to Maj. Genl. in July 1862. He was transferred to the Dept. of the Ohio in 1863, but was injured shortly thereafter. When he recovered, he commanded the Dept. of the South, then Florida by the end of the war.

Jef. C. Davis, 1st Lt. 1st Arty. Born in Indiana, Jefferson Columbus Davis enlisted as a volunteer during the Mexican War. He received a commission after service and joined the 1st Artillery. After the fall of Fort Sumter, he became colonel of the 22nd Indiana VI before becoming Brig. Genl. of Vols. in December 1861. He saw action at Pea Ridge, Stones River, Chickamauga, and the Atlanta campaign among others. He remained in service after the Civil War, gaining fame with his command of troops during the Modoc War.
Estimate: $4,000 - $6,000
Price Realized Including Buyer's Premium
$3,819
06/11/2010 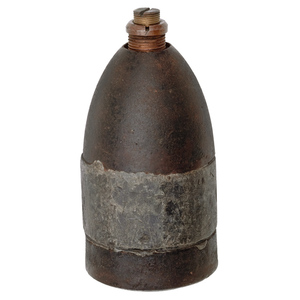