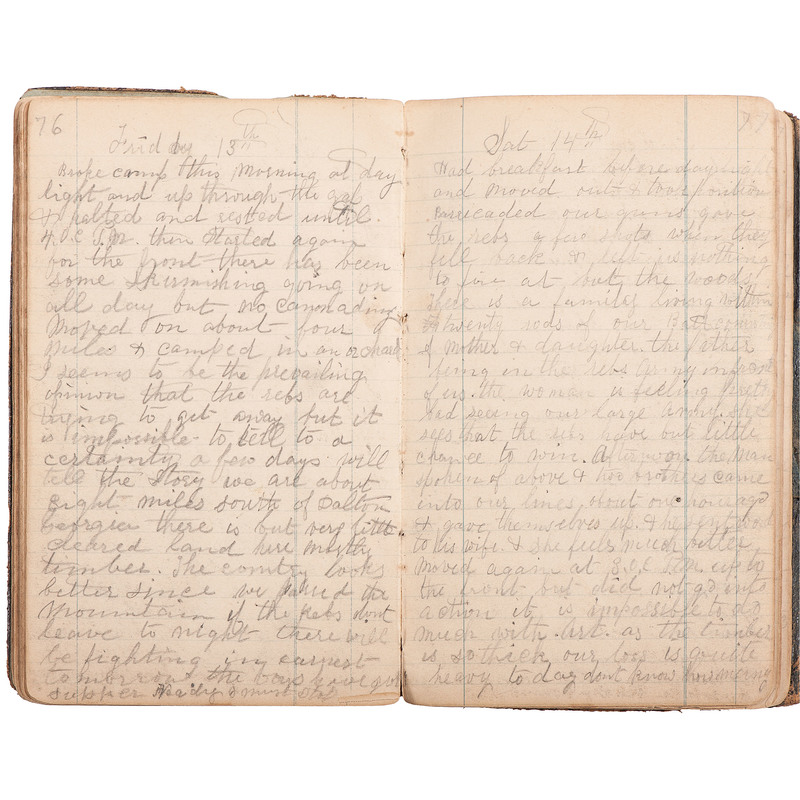 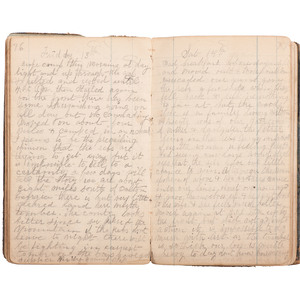 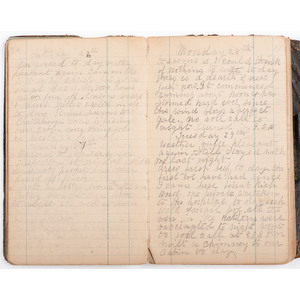 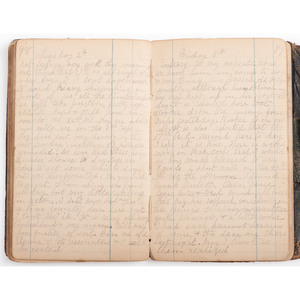 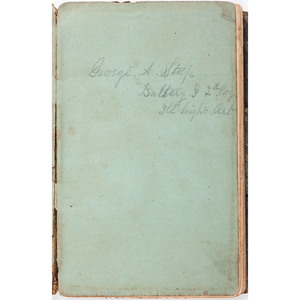 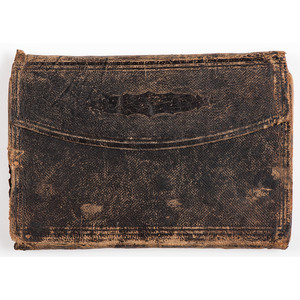 Leather-covered notebook, 4 x 6.5 in., with penciled entries dating from Feb. 16, 1864 and written by George A. Stolp, a 30-year-old farmer from Aurora, IL. Stolp enlisted near the end of the war, after many of the younger men were already gone. On February 29, 1864 he was mustered into Co. I, 2nd Illinois Light Artillery. Diary goes through July 15 (132 pp). Many actions in which the regiment participated during this time were associated with the Atlanta Campaign: Rocky Face Ridge, Resaca, Dallas, New Hope Church, Pine Hill, Kennesaw Mountain and Peach Tree Creek. Highlighted entries include:

May 7: "...Reveille at 3 O.C. A.M. ...all ready to move before daylight...our forces drew up in line of battle our Batt took position on a rise of ground sheltered by timber...10th...We had just settled down last night for a good nights rest when we were called to the front started at dark + worked our way up to a position in front of the rebs fortifications. We came into position on a very high ridge having to draw our guns up by hand for more than one half mile....Worked till morning throwing up breast works done some considerable firing...12th...Started at six this morning down the valley with our whole Corps to join Hooker some 15 miles below leaving two corps at Buzzards gap to hold the Rebs there. It is impossible for us to take the gap from this side...14th ...There is a family living within twenty rods of our Batt consisting of mother + daughter the father being in the rebs Army...the woman is feeling pretty bad seeing our large Army. She sees that the rebs have but little chance to win. Afterward the man... + two brothers came into our lines...+ gave themselves up + he sent word to this wife + she feels much better..."

May 15: "And such a Sunday I never witnessed before. Ordered out to take position at 8 O.C. A.M. about 500 yards in front of the rebs rifle pits...we were obliged to work on our knees to dig trenches + throw up breast works for a protection against Sharp Shooters we got in position ready for action at 2 O.C. P.M. The rebs are well protected with log breast-works...while I am writing this the bullets are flying altogether too thick for comfort...Our killed + wounded up to last night was estimated at one thousand I do not think to days fighting quite as bloody...yet it may be before night...16th Moved our section after dark last night to a less exposed position...we had just finished our breast work when the rebs made a charge...it was about midnight...so many demons...we gave them the  best we had... Gen Palmer says there is not a Battery in the service that ever done better..."

May 17: "...had a little fun + some fresh port this afternoon Secesh hogs mussn't come around our camp...especially if we have been without fresh meat any lengths of time We are getting farther + farther down in dixie hope we have shant stop till rebs are in the dust...18th ...two miles from Rome our troops have possession after about two hours hard fighting our loss estimated 15 killed + 40 wounded..."

May 28: "...war work on the skirmish line all night...It seemed one blaze of fire the whole length of the line...We can not help our boys...half as much as we wish sometimes because the country is so...heavily timbered it is impossible to do much...only now + then can we get a position...cheering news...this morning to good to be true I am afraid report has it that Gen Thomas on our extreme left killed + captured whole corps of rebs yesterday + that our cav got around in the rear of the rebs + burnt a train of four hundred wagons + another report says that Gen Rosecrans has come up on our sight with forty thousand men if this last is true we certainly have got Johnson caged...29th...got in camp I don't know more than a fool where we are more than that it is some where in Georgia...These movements appear very strange to us our boys are laughing about the move + call it strategy...30th...The rebs charged our lines four or five times in as many different places in the course of the night but were repulsed every time...very hard fighting they left two thousand dead on the field..."

June 19: "...The rebs are in position on what is called lost mountain...we have been shelling their position for sometime...24th...we finished bringing in Ammunition which we are obliged to bring in after dark as we have to cross an open field in plain sight of the rebs + as our ammunition was getting a little short the Capt gave orders not to fire unless the rebs opened on us...consequently we have a quiet day prisoners report that to day was set apart as a day of fasting + prayer by the Rebs so that accounts for their keeping so quiet...26th...rebs opened on our lines with all their art + our boys returned the compliment + such a roar...I can think of nothing to compare it to..."

The 2nd Illinois Light Artillery mustered into service on May 23, 1861 and mustered out over several months in 1865 by Company/Battery. Stolp's Battery I mustered out in June in Springfield, IL. Other batteries mustered out from late April into July. Before the Atlanta Campaign this unit fought at other major engagements such as Corinth, Chickamauga, Chattanooga, Jonesboro and Bentonville.