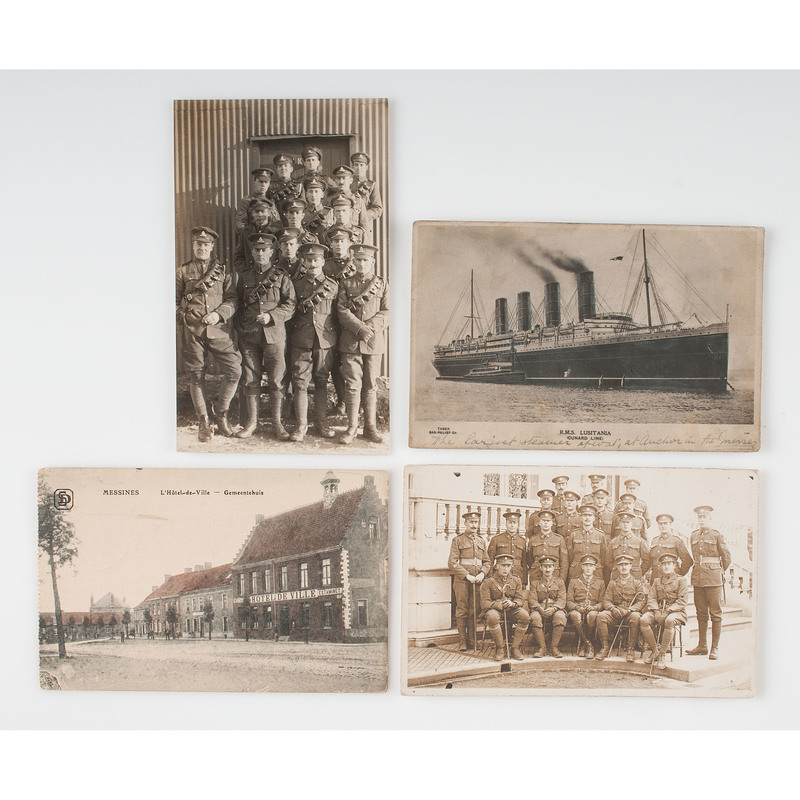 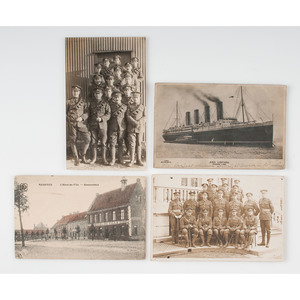 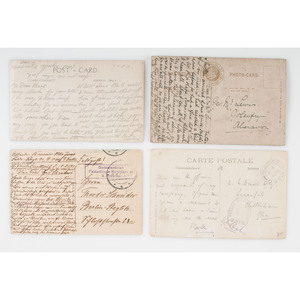 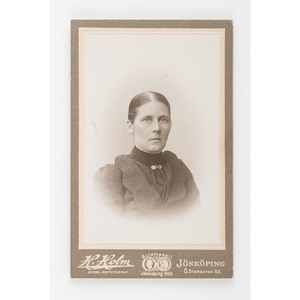 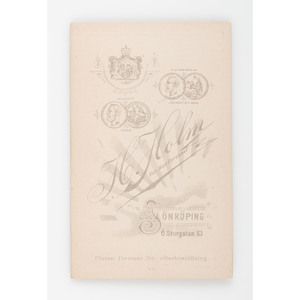 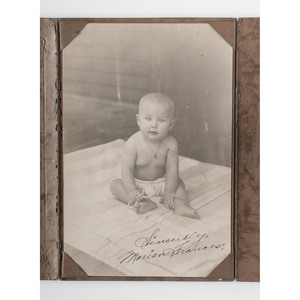 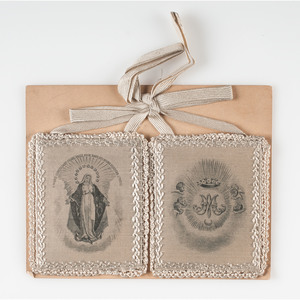 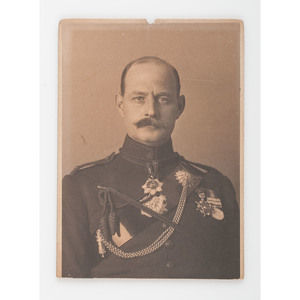 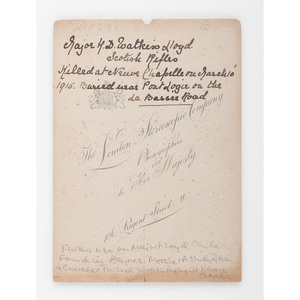 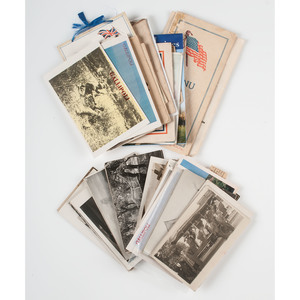 There are 8 photographs, from 1.5 in. square (on slightly larger mount) to cabinet-card sized. The latter has manuscript notes on verso: Maj. H.D. Watkins Lloyd. Scotish Rifles / Killed at Neuve Chapelle on March 10 / 1915. Buried near Pon Logie on the de Bassee Road. Photographer's backmark of London Stereoscopic Company. Another commercial photograph shows men all around heavy artillery. Caption indicates these were German guns captured near Amiens.

- Blank Field Service post card.
- Postcard of RMS Lusitania, with addressed to Mr. Lewis, Goleufryn, Aberavon (Wales). The note is a bit cramped at the end, so the signature is not clear, but the writer tells Rev. Lewis that Father and Mother arrived safely at home - presumably on the Lusitania - on an earlier trip before the German submarine got her.

- Blank postcard addressed to Major William Pitt on Bishopsgate Street informing him that they are "Insuring all our property against aircraft."  Stamped date of Aug. 21, 1916.

- 5 color postcards, one of soldiers burying British dead, 4 of Gallipolis.
- 1 cartoon postcard
- 7 war photos, 3 in French and English
- 3 photos of troops (most British) made into postcards
- 26 family photos made into postcards. One of the photos is of the same two women as the smallest (1.5 x 1.5 in.) image in the previous group.
- A scapula still stitched to a card, with image of Mary, above her head: "O Marie conque sans peche priez pour nous qui avons recours avour." (Oh, Mary, without sin, pray for us who have (no?) recourse.)
- A Christmas Message to our Men at the front. From the Rector. 1917.
Christmas card with soldier with American flag giving a doll to a young girl, French flag in the background. With manuscript "France 1918. Richard MacCracken."
- Christmas card with American Expeditionary Force symbol on front, from Major H.O. Reck, Commanding Officer of U.S.A. Base Hospital #67, Mesoes, France." Christmas 1918, New Year 1919.
- Xmas and New Year greetings, 1916-1917 with New Zealand flag; inside a photo of troops, "Somewhere in France."
- Greetings B.E.F. France. Xmas 1916, 32 Stationery Hospital; with photos of the hospital in 1914, one in 1915, and 1916 panoramic view.
- Kipling's Message, delivered 15 Feb. 1918, 3.5 x 6 in., 12 pp.
- Postcard with "The Army Service Corps."
- Cdv with President Lincoln's Farewell Address to his Old Neighbors
- Mesen tourist's guide to war-related sites and monuments
- Menu for Thanksgiving Feast, 29 Nov. 1917.  363rd Regt., AEF.
- 4.75 x 7.5 in. Buckingham Palace. Message from King George, "...memorial of a brave life given for others in the Great War."

Variable as expected. Most fairly good.