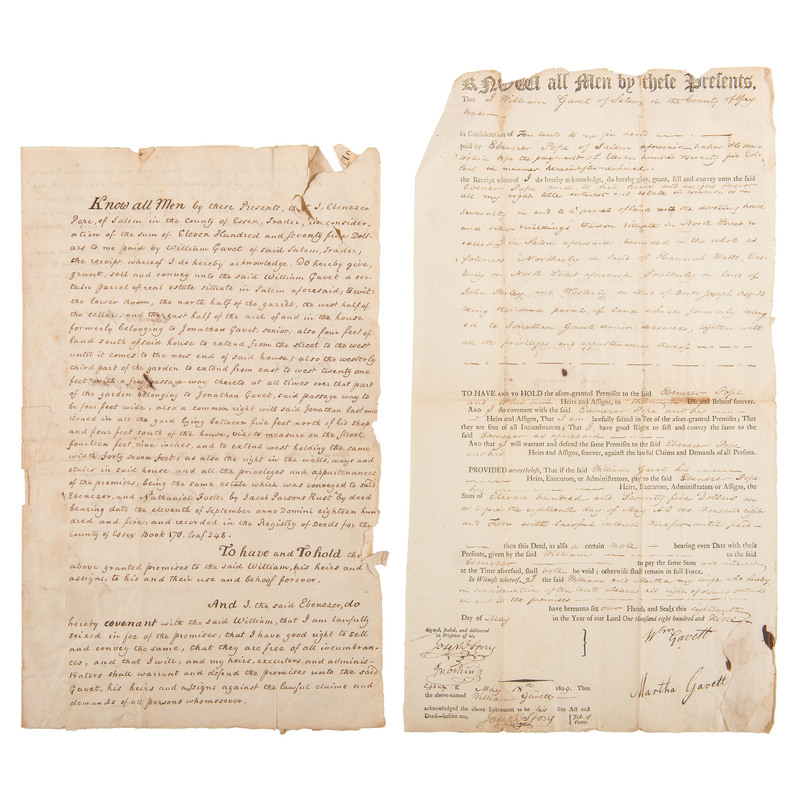 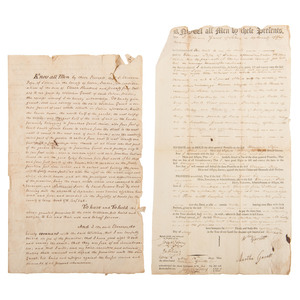 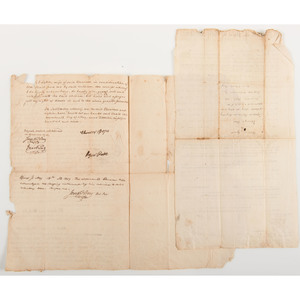 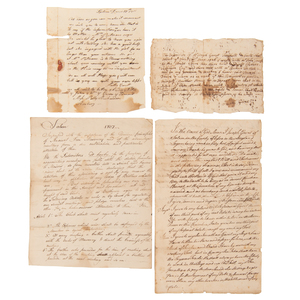 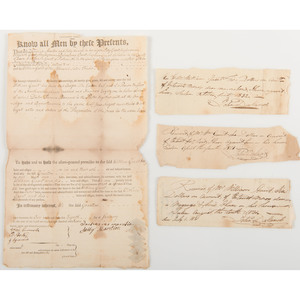 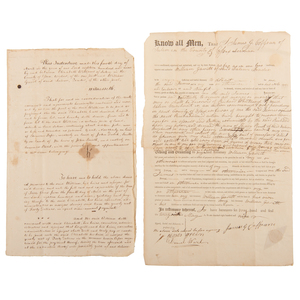 Lot of 40 items, including deeds and receipts concerning members of the Gavet / Gavett / Gavit (and other spellings) family of the Salem area of Massachusetts. The spelling varies, sometimes between branches of the family, other times within the same family.

According to a family Bible, the story of this family in the New World begins with Philippe Gavet, born on the Island of Jersey, a region that has variously belonged to France and England, but is populated primarily by peoples from northern France. Philippe was born May 2, 1631 and immigrated to Massachusetts in 1647. He married in 1655. There is recorded a marriage of Philip Gavett and Hannah Macchone in 1681. Since the youngest child was born in 1699, Philip would have been over 80 years old if he was the immigrant. It is thought that this may be a younger Philip (and the name spelling was "Anglicized"), the son of the 1655 marriage, but little is known about the issue of the earlier marriage.

The documents offered here tell several stories of this family. The first ones seem to focus on Joseph Gavet and the estate administered by his son Jonathan, including:

• Joseph Gavet, ADS, Salem, 2pp (7.25 x 12 in.), November 2, 1764, copy of his Last Will and Testament. Leaves the typical 1/3 of his estate (other than his tools) and use of the house for his wife, Susanna. His tools and workshop, etc. to his son, Jonathan, with the remainder of the estate divided between sons Samuel, Jonathan and John. Jonathan is named executor and charged with paying any debts and burial expenses. He notes that if his son John should learn the Joiner’s (Joyner’s) trade, he will be welcome to work in the shop with Jonathan.

• Estate asset inventory of Joseph Gavet’s estate, 6pp (approx. 8 x 12.5 in.), October 19, 1765. Extensive listing since every woodworking tool is enumerated. Last page has upper right corner removed. This was a family of some means, as the estate is valued at just under 300 pounds.

• Partially printed DS (8 x 13 in.), Salem, August 26, 1806. Deed of Jonathan Gavet, giving 1/7 part of land he inherited from his father, Jonathan Gavet, to his son, William Gavet, in consideration of 300 dollars paid by William to Jonathan Gavet.

The next group seems to focus on William Gavet including administration of Jonathan Gavet's estate, including:

• ADS, 1p (8 x 9.75 in.), Boston, March 29, 1841. Termination of co-partnership between William Gavett and George Gavett, operating under the firm Gavett Co. For $300 “George Gavett relinquishes all further claims to any and all property and debts owner of held by the said firm of Gavett Co. and authorizes and empowers William R. Gavett to settle all the concerns of the copartnership.”

• One other document, manuscript, 2pp (8.25 x 10 in.) no names. This manuscript document establishes a lodge of the Ancient Free Masons in Salem. Dated 1807. With 11 Articles for regulating the lodge. It is unclear who the subscribers to this new lodge were, but we could speculate that at least one Gavet was involved. Joseph Story was also a Mason, and could have been involved in a new lodge in Salem.

Most in somewhat rough shape with separations at folds and some edge scuffing and margin tears. Most still readable.