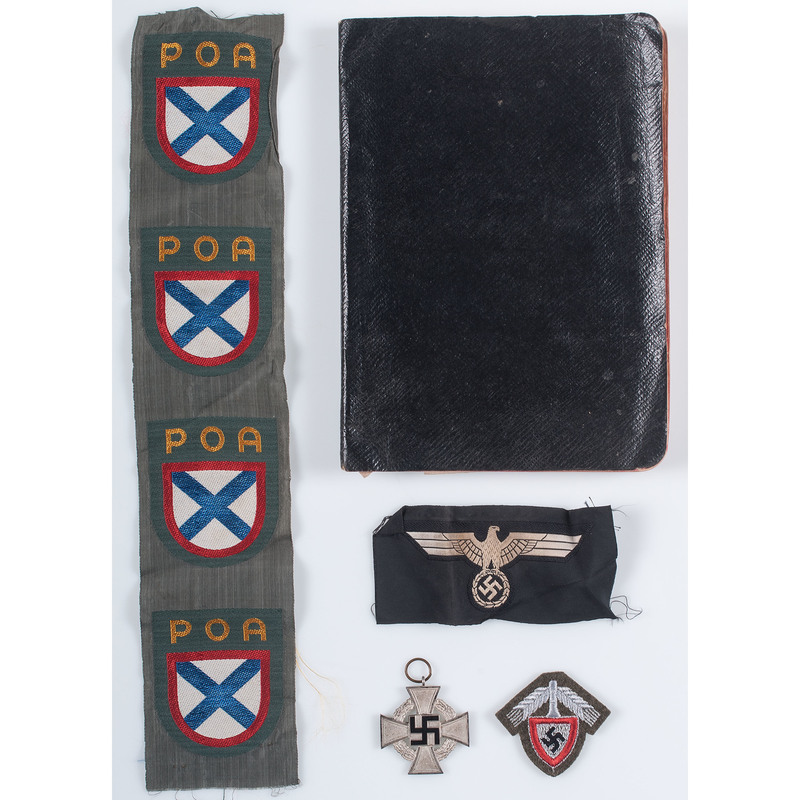 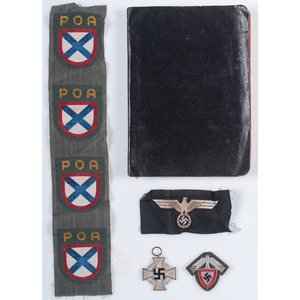 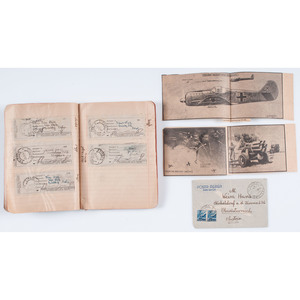 Notebook, .575 x 8 in, saddle stapled, black "leatherette." A few letters are written in the notebook, a few are tipped in, about half are loose, stuck between pages.

From what little can be gathered from these documents, is described in a document to the Intergovernmental Refugee Organization (IRO). A Yugoslavian national, resident of Novi Sad, named Ivan Weisz, was "placed to work by force at Hungary by order of Hungarian authorities. (Our territory came to Hungary after the capitulation of the Kingdom of Yugoslavia.) The [said Weisz] was forced to live under the worst conditions and unhuman treatment during a period of more than 7 months.

"2) Further more the fact that [he] did not return to his native country till 1st of November 1946, the present Tito regime brought his house and his enterprise (construction-locksmith-mechanic and metal printing firm) under the control of the state.

"3) As already mentioned, is the [applicant] a Yugoslavian Citizen who does not want to acknowledge the present total[itarian]. regime and therefore he thinks himself to belong to the category of those political fugitives, who only want to return to their native country if some better change in Government will have taken place.

"4) Since the general situation of the Yugoslavian D.P.s does not improve, the [applicant] has the expressive wish to emigrate with his family, wife and son, to the U.S.A. where his sister is residing.

"...The inexpressibly sad fate of the so-called D.P.s and the pains of these homeless people will doubtlessly make it necessary to help them improve their unworthy circumstances after 3 years of peace as soon as possible.

"A fundamental paragraph at the agreement of U.N.I.R.O. will also be to give us the possibility for emigration and thereby also improving the sad problem of all fugitives like in my case." As a footnote to this document, the official certifies that the was an "independent master till 1944 and that he was no soldier."

At some point, the son was separated from the family - possibly at school (there are two transcripts in here). Some of the documents seem to be focused on reuniting the family.

Various documents in here are in German (Austrian), Italian, Serbo-Croatian and English. The first is a typed letter in German tipped into the notebook. It is from a "Political Representative" in Rome to Janos Weisz in Lipari (Messina). This has to do with the issuing of visas for "stateless" persons. (In several subsequent letters, Weisz insists that he is not "stateless," but rather a displaced Yugoslavian national.)

There is a group of half-sheet notes (typed) that are loose and tucked into the notebook. Most of these are from Alex Behring, whose stamp indicated that he is "Spezial-Berichterstatter in- und auslandischer Zeitungen" (Special Reporter of Domestic and Foreign Newspapers). It is not clear how Behring came into contact with the Weisz's (especially Janos), but one can imagine, as today, contacting the press when one is not getting any satisfaction from the official agencies.

One of the items in this group is a typed copy of an article from the "Rome Daily American," April 14, 1948 (in English). It is in regard to a ship that was carrying 8,000 rifles and thousands of rounds of ammunition being bombed in the Port of Bari. The ship was supposedly on its way to Lipari to supply Communists plotting to seize the island of Lipari. What is especially interesting is a comment in passing that "The island, north of Sicily, was a penal camp during the days of Fascism." Janos Weisz, son of Ivan Weisz, was living in Lipari during these years.

There are four pages with a manuscript copy of a letter, written by Janos Weisz. At one point he notes "...I am a minor and did not go to Micheldorf a.d. (a region in Austria), even [as] my parents found refuge after escaping from Yugoslavia." [transl. from German]

Affixed to another page (with a loose cover accompanying it) is a two-page legal document in Italian, addressed to Alex Behring, that seems to be a summons for Mr. Behring to testify in the case of Janos Weisz, "son of Ivan and of Roalia Farago, born in Nowi SAd (Yugoslavia) on November 25, 1928; and resident Lipari; and student; and of origin and nationality Yugoslavia;..." At the end it states that this is a "certified copy of the original which is issued at the request of the interested party to be used for emigration purposes." [transl. from Italian]

Tipped in TLS, Linz, 5 November 1947 - to the Minister of the Interior Rome. In German, from Ivan Weisz, in which he expresses that he is "Concerned about the fate of my humble son,..., born on Nov. 25, 1928 of Novi Sad (Yugoslavia) and currently in Lipari (Messina) interned under matricola 764, I - signed Janos Ivan Weisz - ask as father and legal representative to treat the matter of my son with the best possible attention...

"My son, Ivan, has taken the necessary steps to emigrate to Detroit U.S.A. with my personal consent. He is registered for this purpose at the American Consulate in Palermo and has already submitted all documents required for emigration to the US.

"However, since it is to be feared that my son will have to wait even longer for the visa to be issued, the following suggestion - the political Representative of the Austrian Federal Government in Rome, ...has handed in an application for permission to enter the country. ...It can therefore be expected that my son Ivan will be granted the entry permit for Austria in a short time.

"The undersigned therefore asks to release his son Ivan from the Lipari detention center and to leave for Austria at his own expense as soon as the permit to enter Austria has been obtained...."

A half-page copy of a typed letter is tipped in to another page. It is printed "Oesterreichische Gesandtschaft in Italien / Legazione d'Austria in Italia" (Austrian Embassy in Italy), dated 10 Dec. 1947. The embassy confirms receipt of a letter. However, "With regard to nationality, the Legation has the honor to announce that they would like to enter "stateless" in the section of the application form, because if they sign up as Yugoslavian, they will ask for a Yugoslav passport, which cannot be produced."

The next page in the book has a manuscript note (in German) dated 19 Dec. 1947 that seems to be a reply to this message.

The next item is a letter, Philadelphia, 16 Jan. 19947 with attached 1.5 x 2 in. image of young to middle-aged man (Alex Behring?). In German. "The undersigned Alex Behring, who is currently living in Philadelphia, hereby confirms that in October 1944 he met the Yugoslavian ...Janos Weisz...in a  Hungarian prison political section in Szombathely then lived with him for more than 5 months.

"During this time, Janos Weisz has proved to be a sincere and helpful companion and passionate sufferer, who despite his youthfulness testified to the astounding ability to stay away from all the dangerous elements that were more than enough to be found among the incarcerated community.

"....[He is] absolutely opposed to the extremism that was declared during the war and especially championed by the youth, he also expressed his respect and veneration for the principles of Western culture.

"The valuable characteristics that Janos Weisz has demonstrated during the imprisonment forsee that those will be with him in his later life...."

Another government document indicates that Janos Weisz, of the Foreign Refugee Camp in Lipari has met requirements in translation of certificates. "We inform you that in the next few days we will send you your travel document together with the affidavit sent to us."

Although it is not clear what the final outcome was, we presume that at least one of these displaced persons was able to get to the US in the years after the war.

In addition to the documents, the lot contains an unused Nazi uniform patch; a Nazi long-service medal (cross with swastika), no ribbons; RLS (Reich Labor Service) patch (civilian); and a strip of four machine-embroidered "POA" patches (Russian Liberation Army - Russkaya Osvoboditel'naya Armiya). These were Russians who fought under German command - "Armed Forces of the Committee for the Liberation of the Peoples of Russia" seeking to free Russia from the Communists.

Some toning of pages, but overall very good.