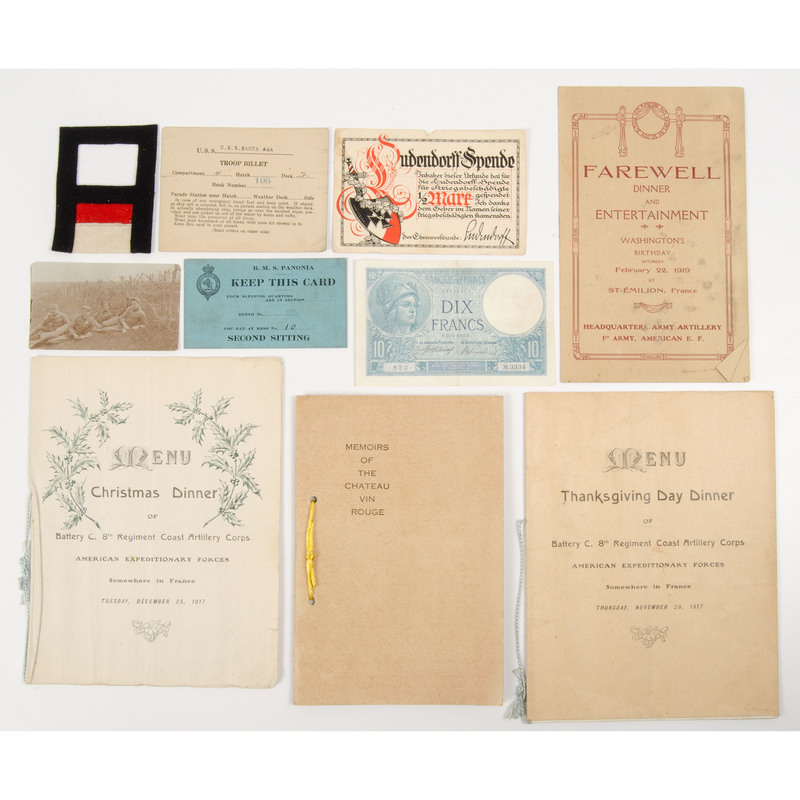 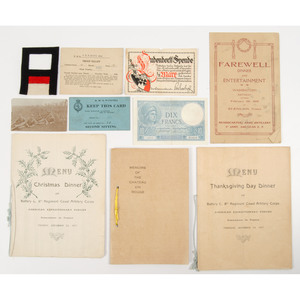 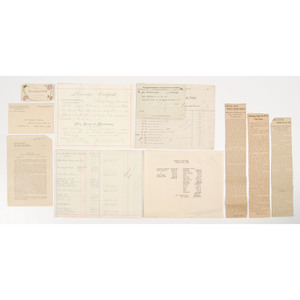 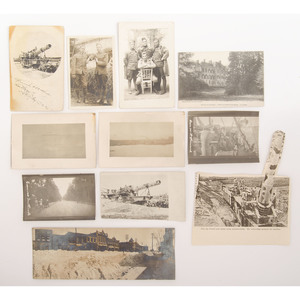 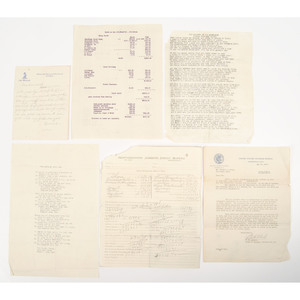 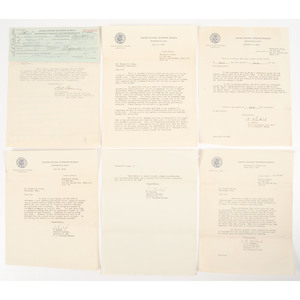 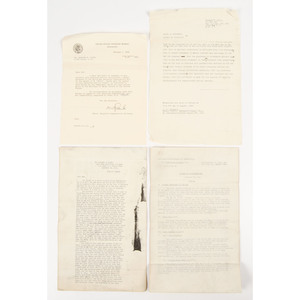 Troop Billet from U.S.S. Santa Ana. No date or notes.

"Memoirs of the Chateau vin Rogue." Field-publication, printed wrap, originally tied with ribbon (small piece present). Title page: "Lyrics of the Chateau Vin Rouge and Other Outbursts by David T. Bennett / With Contributions by John W. (Spike) Meanor and Orein D. Hooper / Introduction by Frank C. Haymond / Tabloid History Roster of Inmates by Howard E. MacDonald. / Published by Harry Cohn / Headquarters Army Artillery, 1st Army / Souilly, France / November 1918." The tenor of the publication may be illustrated by one of Bennett's early "outburts" (poem): 'Twas the quatorze [14th] of Juli, / And all in the house / Were as drunk as the devil; / Good Lord what a souse!... They jumped through the windows / And fell through the door; / Played dead on the table / And pewked on the floor...." Another pair of poems contrasts the drinkability and after-effects of French wine and American wine, and much more. One gets the picture. Approx. 38 unnumb. pp.

A 6-page typed "document" looks official at first glance. But then one realizes that it is "CONFIDENTIAL & SECRET / For Distribution by Aeroplane." Issued at Hindquarters, ...General Stuff. BULL no. 50. Summary of Unintelligence...." Farther on in the document one finds statements such as "The enemy was very active during the period, particularly on the right and left and in the center. Most of the enemy plains crashed. Otherwise there was nothing to report." The "Situation at the beginning of the Day" is a football formation, with "And [sic] end run or an on-side kick, a forward pass or any trick would be sucessful [sic]..." It is signed in type "G. Whiz / Chief of Chaff."

Six French real photo postcards ("Carte Postale"), plus two images nearly postcard-sized. One is of the deck of the ship R.M.S. Panonia with a note on verso about this being the ship they came to France on. Two of the images are of a large camouflaged gun along with a newspaper clipping of the same gun. Also a 3.5 x 9.25 in. panoramic image of a street with deep snow, also printed with postcard back (English/American).

Typed 3-page letter on legal sheets from 1st Army HQ, December 13, 1918, Souilly, France. There are also three newspaper columns with some of Alvey's letters printed in them. The typed sheet has pencil markings with "Omit" next to some paragraphs, so presumably they also printed this letter.

There is a 2-page note to Bernard with paragraphs from Mama, Papa, and one from a person in Chicago of unknown association (presume an aunt or the like).

At least 8 letters from 1922, 1923, 1925 regarding a Veteran's disability claim for treatment for Acne Vulgaris. Plus a couple of receipts, one from the Rexall Drug Store in Winnebago with the price of Acne Lotion.

Marriage license for Mort [Mortimer] A. Alvey and Mary A. Scheaffer, Blue Earth City, Faribault, MN on February 6, 1895. In the 1920 Federal Census, Mort and Mary are listed as Bernard's parents.

There are a few other post-war papers, most dealing with store finances and rents.