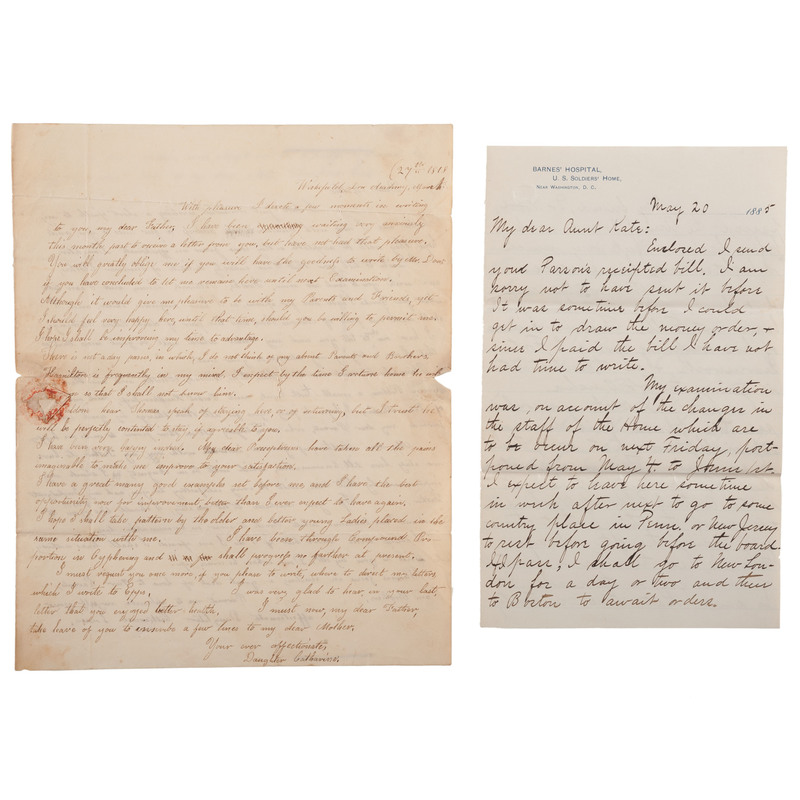 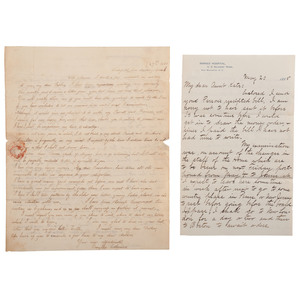 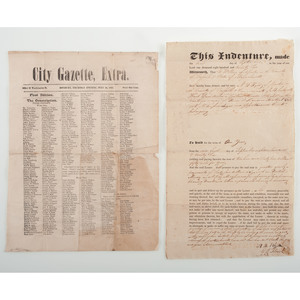 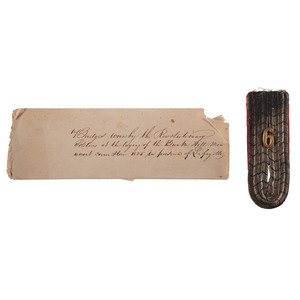 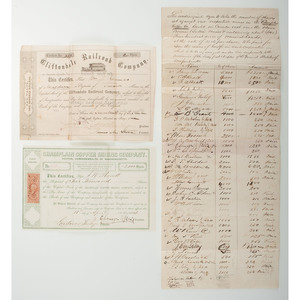 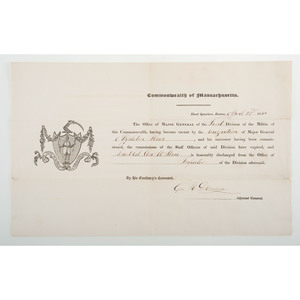 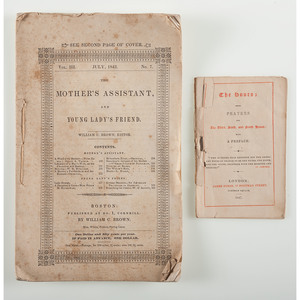 Archive from the Stone/Sparhawk Families of Massachusetts

Collection of 100+ items, including original letters and a variety of other ephemera from the family archives of the Stone and Sparhawk families of Massachusetts. The collection spans roughly a century with the first letter dating to 1818 and later correspondence dating to the early 1900s.

The patriarch of the Stone family was Ebenezer Whitten Stone (1801-1880). Stone was born in Massachusetts and entered the Army in 1817. When he left in 1821 he became a prosperous merchant in the Boston area, first in clothing, then in drugs, paints and dyes from 1843-1850. He married Catharine Louisa Whitcomb on November 22, 1825. Catharine was the daughter of Tilly Whitcomb who served as manservant to John Quincy Adams in Europe and later went on to serve as proprietor of the Boston Concert Hall and a hotel in Quincy, MA. (Catharine Louisa Stone was likely named after First Lady Louisa Catherine Adams.) The couple settled eventually in Roxbury, MA.

When Ebenezer Stone left the Army, he enlisted in the Boston City Guards, part of the Massachusetts Militia and worked his way through the ranks of the guard. In 1830, he was admitted to the Ancient and Honorable Artillery. He held local civil positions as well, as a representative to the General Court and later, as a councilman in Roxbury. In 1851 he was appointed Adjutant General of Massachusetts. He made his first priority a complete inventory of arms, equipment and organization of the state militia. He recommended purchasing new percussion muskets and suggested a state-wide militia encampment with training. He eventually wrote the "Digest of the Militia Laws of Massachusetts."

Ebenezer and Catharine had at least seven children, including Catherine, Elizabeth (Lizzie), Mary, Ebenezer Jr., Caroline (Carrie), Frances and Henry. Ebenezer Sr. died in 1880, nearing his 70th year. He does not show up in the 1880 census, but Catharine and five children are still listed as living in the home. Somewhat interestingly, three of the daughters whose letters are part of this archive do not seem to have married. Most notable of the Stone children was Ebenezer Whitten Stone Jr., who enlisted as a captain on 5/22/1861 and was commissioned into "D" Co. of the Massachusetts 1st Infantry and later was commissioned into Field & Staff of the MA 61st Infantry. He achieved the rank of colonel by brevet for his services rendered in constructing a covered way near Fort Mahone under severe enemy fire.

The connection between the Stone and Sparhawk families comes through marriage. The Stone's eldest daughter Catherine Louisa Stone married David W. Sparhawk in 1850. David Sparhawk was born in Portsmouth, NH, to a prosperous farmer and merchant. David went on to become a successful businessman in his own right operating as a wool dealer in the Boston area. David and Catherine Sparhawk's children are represented in this archive along with the Stone descendants.

In addition to an extensive amount of family correspondence, the collection includes indentures, stock certificates, miscellaneous advertisements, receipts, and 19 century imprints. Highlights and unique elements of the archive include the following:

A military style patch accompanied by a handwritten note reading in its entirety, "Badges worn by the Revolutionary Soldiers at the laying of the Bunker Hill Monument corner stone 1825 in presence of Lafayette.”

Stock certificates, one from the Champlain Copper Mining Company dated 11 April, 1864, and bearing the signature of Ebenezer W. Stone as President. The Champlain Copper Mining Company of Boston was certified on March 30, 1864, and dissolved in 1872. Accompanying this is a list of stockholders in the company and their shares, with a note on back stating that the document was a “List of Original stockholders of Champlain Copper Co./owing to the violation of Jerome Merritts pledge the Company did not succeed in disposing of the stock.” Also included is a stock certificate from 1861 for the Cliftondale Railroad Company with a James Stone listed as Treasurer. Both appear to be rare.

Discharge document dated April 22, 1850, announcing that Lt. Col. Ebenezer W. Stone is honorably discharged from the Office of Inspector of the First Division of the Militia of the Commonwealth, signed by General George H. Devereaux, Adjutant General, who would be replaced the following year by Stone.

Letter from Dr. Eugene Potter Stone, signed “Genie,” written to his “Aunt Kate,” ie. Catherine L. Stone Sparhawk, written from Barnes’ Hospital, US Soldiers’ Home near DC, 1885, with reference to a “negro cavalry” (9th cavalry) going to Ft. McKinney and the Chaplain described as the “only colored officer in army”.

Book titled The Hours; Being Prayers for The Third, Sixth, and Ninth Hours with Preface. London: James Burns, 17 Portman Street, 1847. Seems to be rare. No listing on WorldCat for 1847 edition, and only 4 print editions listed total (2 from 1843 -both at British Library- and 2 from 1880). Binding is gone, held together with pins. Losses to several rear pages.