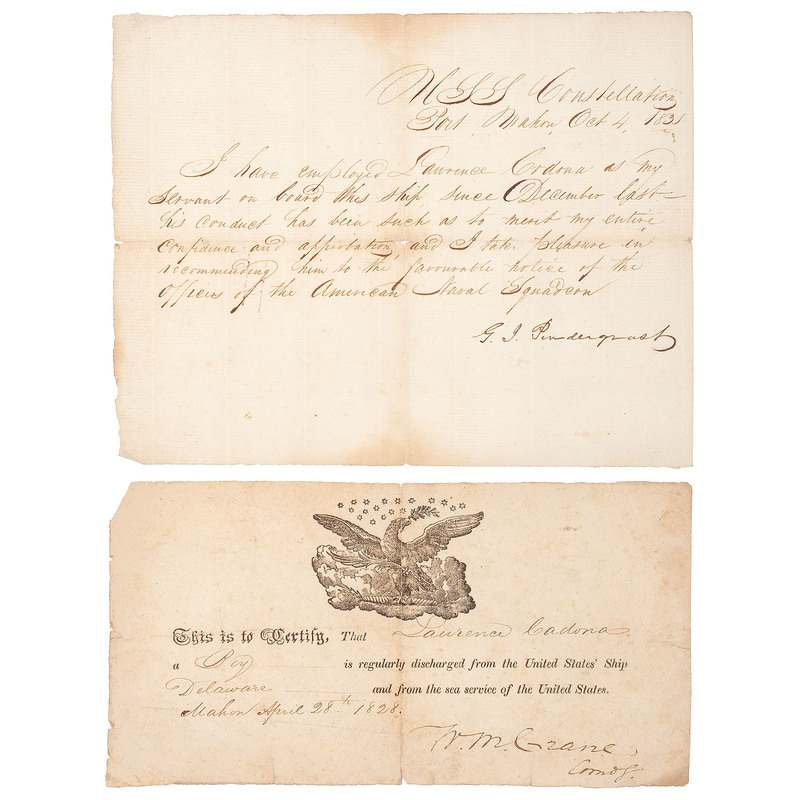 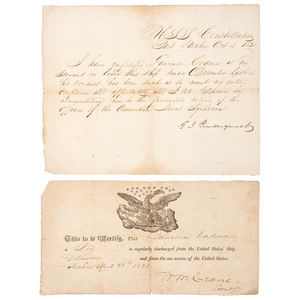 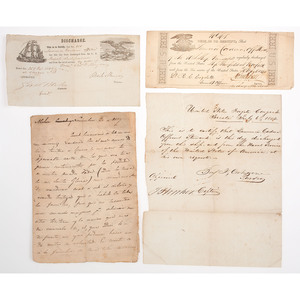 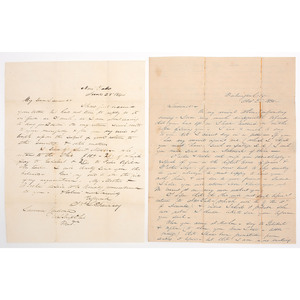 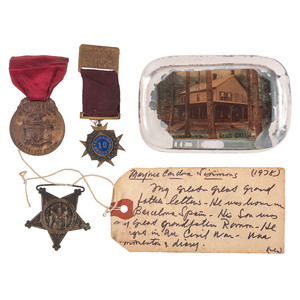 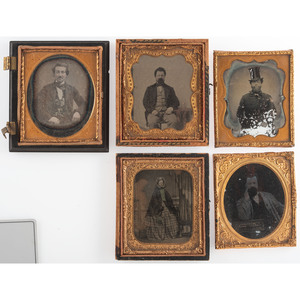 Archive of letters associated with Lorenzo (Lawrence) Cardona and his son, Ramon. Lorenzo was born in Barcelona, Spain. From several letters in this group, it appears that the rest of his family stayed there while he worked to be secure enough to bring them to the United States. Therefore, his children, including his son, Ramon, would also have been born in Spain. Ramon came to America at some point, likely as an adult. There is some communication with him in New York and he did serve in the Civil War.

Lawrence seems to have made an impression on whoever he served with. G.I. Pendergrast writes (Oct. 4, 1831(?): "I have employed Lawrence Codona [sic] as my servant on board this ship (USS Constellation) since December last - his conduct has been such as to merit my entire confidence and approbation, and I take pleasure in recommending him to the favourable notice of the officers of the American Naval Squadron."

Many of his letters from John Chauncey are more personal. In at least one, Chauncey asks him to bring some of his possessions (such as boots) with him when he comes to visit. In others he seems to ask Chauncey's advice, especially regarding America. For example, on October 1, 1840: "You ask my advice in relation to bringing your family with you to this country. Having been so long in the country yourself, you are as well able to judge ...such a step as any one."

Ramon Cardona was born about 1840. In May 1861 he enlisted in the 84th New York Infantry as a private. He worked his way to first lieutenant by the time he mustered out in June 1864. The lot includes approx. 18 letters  associated with Ramon or others in the family, Ramon's naturalization certificate, a statement regarding his father's will, and three GAR medals: one, a Gettysburg reunion medal, Sept. 9, 1923, 1.5 in. diam., red ribbon, no pin; one with "Rankin" and "Brooklyn" on a blue circle with "10" in the center (presume a GAR post?), maroon ribbon, pin with interlinked "GAR"; and a GAR star only, no ribbon or pin, verso with all the corps insignia. Eight cased images of unidentified subjects, presumably family, (two daguerreotypes, five ambrotypes, and a tintype) and other miscellaneous items are also enclosed.

Eight cased images of unidentified subjects, presumably family, are included: 1 ninth plate ambrotype of a woman; 1 sixth plate ambrotype of a woman; 3 sixth plate ambrotypes of men plus a sixth plate tintype copy of one of the ambrotypes; two daguerreotypes, one is half Union case, the other in a full pressed paper case (spine split). The lot also includes a 2.5 x 4 in. paperweight of Grant's Cottage, McGregor, NY, possibly also a veteran's item; a white metal figurine of a chicken, significance unknown, with body broken off the base and feet. Base 3.5 in. long; body ca. 2.5 in. long; and a pentagonal worked flint, which appears to be a projectile point (not a gun flint) that someone picked up along the way and curated.

Some letters with some water damage (not unusual for Navy personnel). A few with fold separations.